Not because I tried and am currently writing this blog thru my mom during my one phone call...but because today I went to a house that wasn't mine when no one was home and felt like a total creep and realized that if I ever did decide to do a B&E (break and enter) I would most definitely be in jail.

Let me back up for a second. I didn't just find a random house with a door open and just strolled in. My best friend Marisa is in India being a baller and I had somethings at her house to pick up. For several reasons no one was home and I was told by her mom to just go on in and get everything.

When I first got there I found the secret key not only did I drop it and then have to search in the dark for it, I remembered Marisa emailing me about the alarm. So I immediately thought that there was going to be one of Fairfax County's finest showing up any minute to arrest me.

I've been going to Marisa's house since I was in 7th grade so it's not like I was in a strange place but I realized that if I ever got the urge to just break down a door and steal some crap I would be terrible at it.

I would probably leave so many clues behind they wouldn't even need to call any of the Law & Order folks to investigate. I'd probably leave incriminating things behind. Like this: 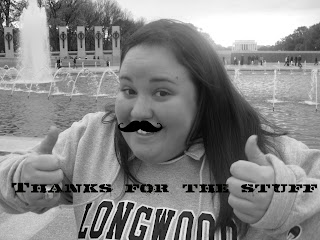 Clearly I would hope that the mustache would throw people off and would be stealing a fountain because I'm George Clooney in Ocean's 11. I mean I watch enough crime shows where one would think that I'm smart enough to pull off a heist but really I'm not.

In the end I think I'm just trying to point out that no one has anything to fear as I do not have the urge/desire nor am I smart enough to be a criminal. I won't be breaking or entering into your homes at anytime. I can't even enter to my own house without cause for concern. (Today it was that my adult footie pjams were air drying on the car port for my neighborhood to see.)

Hopefully everyone is having a good week thus far.