I live in Virginia. Which means that every winter we get about 6'' total. Sometimes a little extra but never more than 2ish snow "storms." This winter however there seems to have been a change of heart from Mother Nature because VA has been slammed with this white crap. This past weekend's blizzard (and I say this past weekend's because there have been several) was deemed "Snowtorious B.I.G." by some genius in the area. I wish I could take credit for it because many know how much I love and frequently jam to Biggie.  (No but seriously I saw "Notorious" the second day it was released).

Due to this past snow's pet name I now envision Mother Nature looking like this: 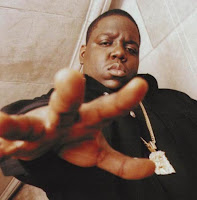 Just tossing snow on hoes like it's dollar bills son.............
That long ellipses was me continuing to fantasize about mother nature actually being Biggie. With a little Puff Daddy dancing in the backround. Stop for a minute and just let that image take over you.
Because of all this snow I've been stuck at home with my roommates Tim, Barb, and Helen. Many of you may know them as my dad, mom, and grandma but I digress. Essentially all I did this past weekend was sleep, eat, sleep again, watch tv, read...and thennnnn I did the most mundane activity I've ever done in order to pass the time. I attempted to unknot a yarn ball that I somehow had gotten to an out of control state. I believe I sat on my bed during the full two episodes of "Gilmore Girls" on Soapnet trying to untangle this ball of yarn. TWO HOURS.
What has my life become when my Saturday consisted of unknotting yarn. I should not be acting like these ladies at the age of 23:

I guess I could blame my Saturday activity on Snowtorious...although I have always fancied myself a Rose AND have been known to knit away on Friday and Saturday nights. Perhaps I shouldn't have admitted that.
I guess the point I'm trying to make is that this weather has led me to boring tasks that I normally would have no patience for. I don't enjoy these mountains of white. However if I was Lindsay Lohan I'd be thrilled at the prospect of 12 inches of "snow." GET IT?! A COCAINE JOKE...BECAUSE SHE LIKES COCAINE....AND SOMETIMES THAT'S CALLED SNOW....ANDDDDD.....
We're supposed to get another 10 or so inches today and tomorrow piled on top of the 2 feet we already have. Awesome.
My next blog post will probably be how I started carving a hole in my wall to escape like I'm in Shawshank.
Does anyone know where I can get this outfit so I can make it more realistic?
Hopefully everyone is staying warm and sane.
--A
Email Post