Are you going to read that?

I'm a huge fan of celebrity gossip. So much so that I once had a debate with my English 400 professor that if I found it important, information given to me by E! was news. She claimed that it was trivial and not newsworthy. I then broke her glasses and stole her lunch money.


Ok maybe in my head I did that. But I did in fact fight to the death (or until lunch) that celebrity gossip was in fact news to me.  Like a gladiator. 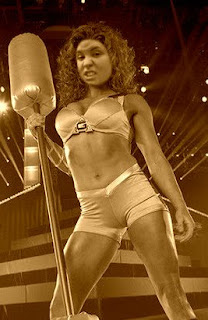 However, I must say I do giggle about certain headlines. It's funny to me that certain people see "Miley Cyrus Hates the Internet" and thinks "BUT WHY MILEY? WHYYYY? Tell me more Popeater.com..."
Here are some of my favorite examples from the week:

"Bret Michaels Says 'No Weirdness' About His Song With Miley Cyrus..."(via Popeater.com)

Really Bret Michaels? A lot of things about you are weird: you wear a bandana, you broke your nose at the Tony awards, you were on a show called "Rock of Love Bus" (which OK I WATCHED), annnd NOW you have a song with 17 year old Miley Cyrus.

This is not celebrity news as I'm pretty sure he came out of the womb in tight pants and spikes.

"Anne And Her Beau Like Wearing The Same Outfit Twice"
X-17.com then shows them definitely not wearing the same outfit twice. I wear the same clothes back to back all the time. Except underwear, because well that's icky.


"The Rielle Hunter GQ Interview: Talking John Edwards Affair, Sans Pants"(via Popeater.com)
I feel like any headline that has Sans Pants in the headline definitely is a. hilarious and b. HILARIOUS.

This would be news if it was 1999.
"Jennifer Aniston Doesn't Know Who David Schwimmer
Got Engaged To" (via Huffington Post)
That's alright Jennifer...because no one else knows either.
I still firmly believe that celebrity gossip is in fact news at least for me. However, there are some headlines out there that make my argument a little tough. I would also like to point out I only read one of those articles.
I will not say which one.
Ok when a title has SANS PANTS you have to see what the f that was about.
Just me?
I'm embarrassed.
-- Jones
Email Post