I am the Biggest Loser

So I have this problem. I have a tendency to get really attached--some might say obsessed--to certain people. They are never people that I know as they are always famous. Let's take it back to my first obsession.

"Saved by the Bell" It was my jam. I watched it literally everyday. I named my stuffed animal after Kelly Kapowski. Zach Morris and his hijinx + AC Slaters upcoming wrestling tournament schedule were primarily what I thought about during my daily activities (you know coloring, napping, making prison shanks out of construction paper and Elmers glue, the usual).

Moving along you'll see my next great obsession was none other than 'N SYNC. I fell in love with all of them--well 4 of them. Really Chris Kirkpatrick dreads and that high of a falsetto voice? I kept him in the friend zone. The others however, I knew all about. I knew that Justin Timberlake's favorite food was cereal with just enough milk. JC Chasez was terrified of needles. Joey was the funny one and Lance was the one who sang two words on every other CD but was cute so I let him slide. I saw them in concert five times. Five. I literally had some sort of mania.

Then I matured and became a one man woman--and by matured I mean 'NSYNC broke up--and moved on to Tim McGraw. This obsession is still pretty rampant but not to the extreme that it once was. I bought tickets with my friend freshman year in college to go to Las Vegas and see him at Mandalay Bay. We stayed at a Holiday Inn and were there for literally 2 days. We also waited for 4 hours after the show and talked to him for like a hot second. He now knows I call him Timmy as I said "OH MY GOD TIMMY WE CAME FROM VIRGINIA TO SEE YOU!" I'm sure he then created a mental picture of me and a note-to-self to up the security around his home.

Good call with the barbed wire fence if you're reading this sir. McGraw-1 Jones-0

I had a brief obsession fling with Elliott Yamin from American Idol...didn't last long but it existed. Felt like I was literally apart of the whole Pacey/Joey couple on "Dawson's Creek."  Went thru a pretty intense love affair with professional wrestling in middle + high school (which did a lot to help prove I was a girl with my unfortunate "shag"/ mullet). I'm a hugggge fan of Chris Cooley but much like Tim that's an ongoing love. But there hasn't been anything epic as of late.

I became intrigued by the "The Biggest Loser" last season. I enjoyed most of the contestants and thought it was a pretty solid show. I don't enjoy the fat on fat hugging though. That truly bothers me. I don't want my bare chubby belly hugging other peoples' bare bellies in a sports bra and spandex. High fives are what's appropriate at the weigh-in guys. High fives and hand shakes. (I feel the same about skinny people hugging bare skinned as well...it's just too much...arm pits are exposed. Just don't do it.)

I would make an exception for one singular person to hug me in this fat on fat manner. The love of my chubby little life. Sam Poueu. He was adorable big and nowwwww he's pretty sexay and getting muscular. He's Samoan. My favorite Gurrrrl Scout cookies are Samoas. Coincidence? I DON'T THINK SO PAL.

The Wednesday after the show I'm usually asking anyone and everyone if they watch the show.

(I hang out in sketchy places on Wednesday mornings and afternoons)

I don't know why I like him so much. Actually yes I do. He's so precious and funny. He's dating this girl from the show which took me a few days to get over...but I wish them luck. I'm sure they are both glad that they have my blessing. Proceed with your lives Stephanie and Sam...proceed with your lives.

I did however find him on Facebook and I did friend him.

Let's just marvel for a second on how truly superb he is: 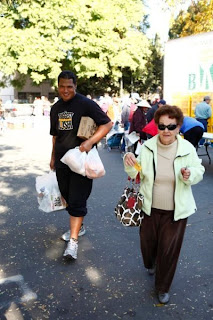 Helping an old lady to her car... 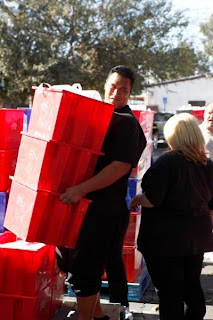 Sam lifting crates...because he's big and strong and handsome.
Ok--on the real -- I just get really excited about certain things and although I may seem crazy I don't plan on kidnapping Sam, or Tim(my), or any children they have or may have in the future. I also do not plan on becoming a bunny boiler. I do however admire them from afar. And by afar I mean on television or reading about them not the 100 feet court ordered distance.
Now that everyone thinks I'm sufficiently bananas I going to go and take a siesta as Health magazine recommends.
--Jones
Email Post