I may be having a Bad Romance with Lady Gaga...

I used to live for 106.7 WJFK. It was a talk radio station essentially for dudes. It was The Junkies in the morning, Big O and Dukes during the day, and The Mike O'Meara show on the way home. Before that line up I always listened to The Don & Mike Show with Tim Jones. So I had no reason to listen to the same songs over and over and over again on Hot 99.5 or listen to the cheese factory DJs on WMZQ.
Then sadly (and I mean I was legitimately depressed about it) WJFK switched to a sports format. The Junkies are still on in the mornings, but Big O and Dukes and the Mike O'Meara show were kaput. I was so depressed. I'd just listen to the podcasts for days  mourning my favorite fratty radio station. I would tell my friend Lauren over and over how much I loved and missed them and how I was so depressed. Some would have been concerned over my attachment but Lauren being the good friend she is, told me I needed to get over it and move on with my life.
So I gave the sports station a chance. The Junkies were the same and Chad Dukes was on in the afternoons so it was kind of like having some of my favs still there. I still listen everyday but then the Redskins had a terrible season and the sports shows started talking about how the 'Skins should trade Chris Cooley for higher draft picks.
My heart can't take such a beating.
For those of you who don't know Chris Cooley (#47) is the love of my life, and better known as the tight end for the Washington Redskins. He's also one of the best players we have on the team.
Also seen below: 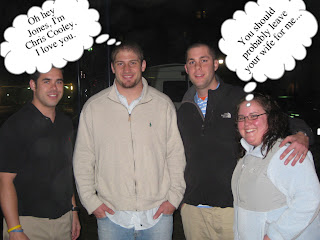 With all this talk of trading my boyfriend I've started occasionally  listening to the local radio stations in between my sobs. Mainly to the cheese factory DJs and WMZQ, and the same 3 songs they played on HOT 99.5 as aforementioned.
Which leads me to my current problem.

(It took me awhile to get to the point this time, and I apologize. But let's hold hands as I get through this trying time)
There used to only be one song that would drive me up the wall.
One singular sensation that would make my skin crawl.
"Fidelity" by Regina Spektor.
Never heard of it?
Here it is:
I didn't always hate it. I kinda liked it at first.
Then the "ha-ha-ha-ha-ha-ha-ha-heart" part
really started to get to me
and I just grew more and more annoyed with Regina Spektor as a whole.
She came to Longwood for Spring Weekend once.
Not only was my building right by the stage where
she was going to play, but my room also faced said direction.
I told my roommate Emily that if I heard that song, even an inkling of it,
I would be forced to blow dart Regina Spektor from
our window.
Recently a song that I used to jam to has become the new "Fidelity."
It's "Bad Romance" by Lady Gaga. I have to admit I was
warned by the same Emily that this would happen to me,
as the song even annoyed her.
However, I didn't listen as this advice came from someone
who listened to "Buy You a Drank" on constant repeat.
My disdain for the Gaga's latest song has crept up on me slowly.
I'm a fan of hers so I tried to resist the fact that I hated it with a
fiery passion for quite sometime. Then I started to really
break it down by listening to the lyrics:
1. Why Lady Gag, do you want someone's ugly?
2. Why do you want their disease?
(As far as I know you try NOT to get someone's disease, am I right? Or
am I right?)
3. Quite frankly Gag I don't want a bad romance. I'm 23...I don't have the time.
4. Not to mention this "Ra-ra-ra-ra-ra" portion of the song
realllly grinds my grits.
Clearly I realize that I am in fact turning in to Helen who happens
to be 76 but seriously Lady Gaga. I will listen to all of your songs,
and perhaps even support your oddly shaped nose and lazy eye.
But I can't take listening to "B.R." any longer.
It might break us up Lady G and I don't think I have enough
hate in my heart for Regina Spektor AND you.
Also I really want to borrow this outfit: 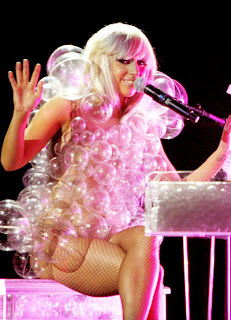 To counteract talking about two songs that I hate
I will leave you with 2 songs I love:
1.
andddd
2.
What are your favs? What songs make you bananas?
Do tell.
Love,
Jonessss
P.S. (sorry the formatting is so weird...i'm still working it out)
Email Post