After my hellacious day in driver improvement with Satan I had plans to see Chelsea Handler with my friend Apes. We got there a little late due to difficulty navigating DC traffic. When we got there Chelsea had been on for like 10 minutes so the theater was dark. We were shown our seats however it seemed as though some heifers were in them. Usually I wouldn't refer to nice people accidentally sitting our seats heifers but these women sucked thus the title of heifs.


The best way to describe their appearance is to include a picture of the Gap Girls: 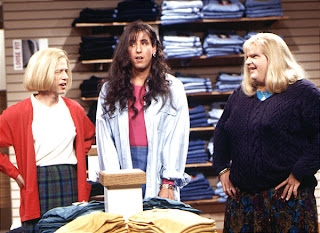 
Her friend that actually ended up yelling at us looked more the David Spade character. Here's how it went down.


David Spade and Chris Farley were sitting in two seats that Apes and I assumed were ours. However, Usher (I could say the usher but I'd like to pretend Usher Raymond was the one showing us to our seats) told them to move and sit in the row below and told us to sit there as well. Somehow David and Chris had two other friends appear out of thin air. They then told us they needed another two seats...and rudely asked if we should be sitting there. I suppose they thought we were seat stealing. However, we were just following instructions.


I said "Yes this is where Usher told us  to sit."


They then went into what can only be described as drunken hysteria. I tried ignoring them and watched Chelsea but Chris Farley and David Spade kept tapping me on the shoulder. I politely looked over and said "Yes?"


Then David Spade said the following with her finger in my face:


I believe my first reaction was this: 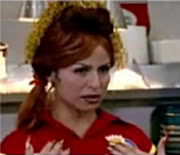 But then I don't know what came over me but I suddenly became so enraged. I'm pretty sure I looked like this: 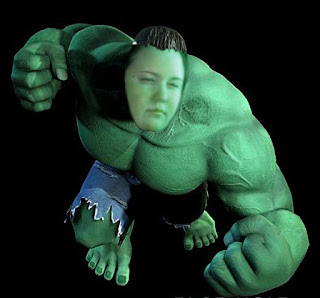 I believe these were the words that came out of my mouth (I say believe because it was like a mini rage black out):
"YOU DON'T HAVE TO BE SO F$#*ING RUDE. YOU COULD HAVE JUST ASKED NICELY. WE WERE TOLD TO SIT HERE. WE'LL F$*@ING MOVE. HAVE A GREAT EVENING."
We then moved our seats and April gave them the death stare for a good 15 minutes. After the show was over we listened to one of them talk about how her night was ruined and how she didn't have any money to go out to the clubs.
Apes and I thought it was best to keep that warlock caged anyway as she was quite disgusting.
I normally don't lose my cool like that. I mean I have yelled before but not very often does it come from sheer rage. I felt so much better after I unleashed the fury on David Spade. I think a lot of the anger came from being heckled by Marky Mark all day in Driver Improvement. Whatever the case it was my first Bon Qui Qui moment, and although I'm not proud of it...it kind of felt nice. I feel Chelsea Handler would have been pretty proud of me as well.
Don't worry I won't be signing up for Mixed Martial Arts anytime soon to take out any left over aggression. If I did though I would need a cool name. Leave suggestions below.
--Jones
P.S. For those of you who don't know who Bon Qui Qui is here's the video.