Last night you were on my favorite show "Saturday Night Live" and I was open to the idea. I generally find you to be pretty annoying and trashy...which is probably why my ginger friend & Cowboys fan Ellen enjoys you so, but I thought that I would give you a shot. Perhaps you'd be great.

Let me start by saying on premise alone I can support someone who wakes up every morning like P. Diddy. I don't really see how it is great for your dental health to brush your teeth with a bottle of Jack but I mean whatever sometimes I eat a cupcake for breakfast. We all have our vices Ke$ha.

When you came on stage I was immediately annoyed by you. You wore a one piece silver jumpsuit. Really? JLO did that on New Years Eve, and looked cooler than you, and she fell dude. You tried to sing acapella which is literally only cool when Andy Bernard does it. Boom roasted.
Then some weird astronauts were behind you. They were actually pretty funny so I'll give you a pass on that. You started doing the robot which I literally love. I do it all the time. Here's me and my friend Rachel doing the robot in front of Abe Lincoln in DC. 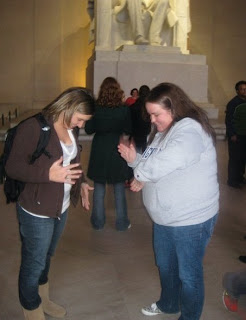 But you killed it Ke$ha. You just kept going. You wouldn't stop. Why? Why would you take something so awesome and ruin it like that for me? I mean trust that I will literally never stop doing the robe, but in moderation homie.
Later you sang "Your Love is my Drug." You looked like this:
.........................seriously?
I mean I'm sure if you sounded better, and didn't bash other artists on the regular for being poor live performers, I could semi dig it. But I must say I'd prefer Britney Spears's fake singing to your live voice. I believe that I could do those same moves, and sound about the same. If things get boring I may try it out and post it up here.
I feel like you're the girl at the party that will do the most crazy/icky/insane/hardcore thing to get attention and those girls always freaked me the f out.
I also don't care for the fact you always talk about the way you smell. If you smell bad, you don't brag about that or announce it, you hop in the GD shower and take care of the stench. I would literally bathe in bleach not tell MTV.
MTV Shows
Also...I'm going to start calling you Keisha because I think that it's really lame that you have a $ in the middle of your name.
You stunk up my favorite show (which I  know many people will say that it stinks by itself but you hush your trash mouth because I still find it hilarious). We part ways here Keisha.
Good day.
I SAID GOOD DAY.
-Jones
P.S. I apologize for the rage...but I feel that my beef with Keisha needed to be made public.
Email Post