I have been a victim of kidnapping.

As many of you know I put out an Amber Alert for my favorite tennis shoe. I was pretty sure it ran away to greener pastures. Maybe to someone who'd utilize it more than I did. I was afraid I would see it hanging from one of the phone lines--showing me that its life was so much better without my foot living inside it.

I had been keeping its twin (fraternal) in the backseat of my car...hoping that if I found the other one I could just throw it in, reunite it and head on over to the gym pronto. (ha.)

Well last night I was cleaning out my room which was quite the pit and I found it! I found the Mary-Kate to my other shoe's Ashley! They could finally reunite! So I ran...ok walked...out to my car ONLY TO FIND THAT THE ORIGINAL SHOE WAS MISSING.

I remembered earlier in the day my two friends from work were in my car to take a trip to Party City and Starbucks...because we live dangerously. Christie sat in the backseat and I thought I remembered her saying "Jones, is this part of the missing shoe pair?" To which I replied, "Yeah...I'm super bummed."

Here's where you need a little back story.

Let's Law & Order this up a little. Here are the suspects: 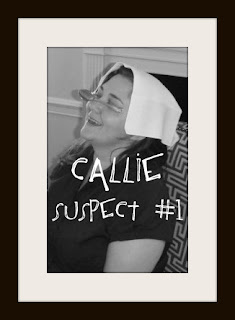 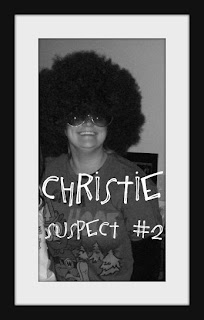 Callie and Christie are two of my closest friends at work. However they LOVE and I mean LOVE to tease and trick me. One day they stole my car keys and told me something was missing.  I was convinced they stole the air freshener. I actually ended up finding that --but whenever something goes missing I automatically think it's them playing some trick on me which makes me super paranoid and makes me look even crazier when I call telling them to give me my stuff back. Accusing them is easier than admitting I'm scatterbrained.

So when I couldn't find my shoe in my back seat my first thought was..."they stole my shoe." But then I thought "Jones. You always think they are playing tricks on you - you're just being paranoid. Don't look crazy."

Therefore I calmly texted Christie asking her if my other shoe was in fact in my backseat or if the shoe I had just found in my room the same shoe I had all along.

She said it must have been the same one.

I was back to square one. Still shoeless. Amber Alert still in effect.

Then this morning I got to work and there was a box sealed shut (as pictured below:) 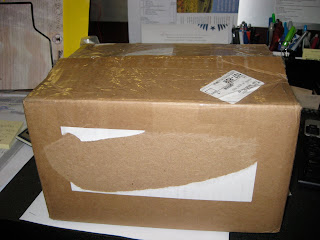 Wouldn't you know that when I opened the box: 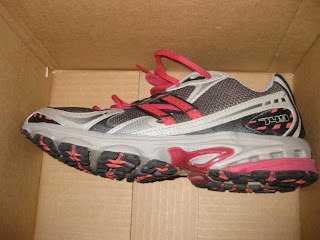 MARY-KATE!
Although I was completely thrilled to have both shoes once again I was so annoyed because the ONE TIME I didn't think those fools were playing games with me THEY TOTALLY WERE. It seems as though Christie slipped my Newbie in her purse.
Cruel. Just cruel.
Side Note: I also have these on my desk: 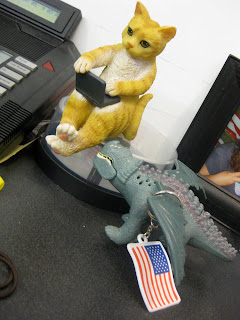 Christie interoffice mailed the cat on the computer. He looks like a creep so I named him Merv. As in Merv the Perv. Also my Happy Meal Dragon courtesy of my non-harassing friend Kris.
I'm even more paranoid than ever Nuggets. With these two on the prowl none of my belongings are safe. Ok that's an exaggeration. I can assure you however that posting those two picture of them  is only fueling their flames to taunt me further. But it's the small victories.

But seriously...I may have to call in sick tomorrow.