After meeting Kris Allen I was pretty certain the day couldn't get much better.
BUT IT DID.
We ended up going to Union Square Park.
There were so many crazies there that I was on people watching overload.
For instance there were several...and I mean several roller bladers.
Who I judged harshly might I add.
Then these showed up: 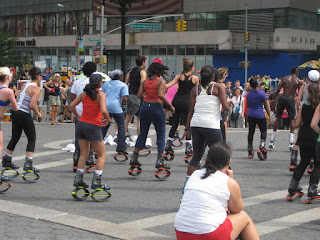 Yes.
People on moon shoes.
They did some work out in the park.
My best friend Sara met up with us and when describing where we were I literally said the following sentence:
"You're going to see a bunch of people on moon shoes...and a dude that looks like Billy Blanks from the Taebo DVDs. We're behind them."
There were two fights. Old lady sunbathers. People methed out.
It was an episode of "Intervention" at the park.
I was in heaven.
After eating Mexican food and convincing Bea she should go back to Nordstrom Rack to buy a purse she'd been thinking about all day, the coolest thing ever happened.
I met my favorite blogger in the world: Michelle Collins.
She writes and is the Managing Editor for bestweekever.tv and also a comedian.
I've been reading her stuff everyday for the past two years and just really admire her.
I don't cut locks of her hair or anything or have her social security number memorized
but she was one of the inspirations for me to start this blog.
As I was standing next to the racks I spotted her and started sweating...again.
I really need to get that checked out.
I felt like such a stalker but I introduced myself and she was so freaking cool.
She stopped and chatted with us and even took a picture with me.
We talked about blogs and ....stuff. It was just magical.
I'm judging myself for how I posed.
No need for you to. 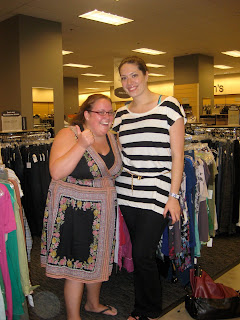 It was just so neat/awesome/amazing to meet someone you admire a lot for their humor and talent and have them be THAT AWESOME in person.
She said I wasn't creepy at all.
But I know that I was and I appreciate her not making me feel like a total weirdo.
This is starting to be a little "reach for the stars-ish" but I just love writing and
meeting her was just so fantastic.
Everything after that was just sunshine and rainbows.
We went to this awesome burger place called Shake Shack.
If I could rent a room there and eat their french fries everyday I would.
While we were waiting in line an old man stopped and told us we didn't need to eat there.
He said with all seriousness:
"Why wait in line when there's a perfectly good deli across the street? They have $5 subs that are huge."
We weren't in the mood for Subway.
The weekend was perfect.
.......
The End.
Email Post