I've been slacking on my blog lately.
But there's a reason.
I have an obsession.
Like a sick obsession that has taken over my life.
Many of you know that I get heavily involved with TV show relationships.
For instance:
I grieved for 3 days when Denny died on "Grey's Anatomy" and to be quite honest I don't know if I'm really over it.
Barb Jones walked in to me sobbing after the episode and said,
"You know it's not real right?"
To which I calmly replied,
"IT DOESN'T MAKE IT HURT ANY LESS MOM. HE WAS A WONDERFUL MAN!"
Yes. I am that nuts.
I definitely can't watch that episode ever and to rub salt in the wound Jeffery Dean Morgan was also dead in the show "Weeds"
Not fair. 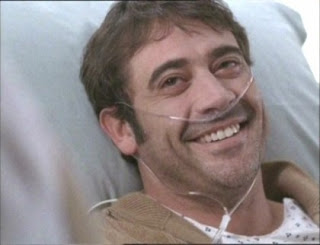 RIP Denny Duquette
Then there was the Joey and Pacey situation.
I would record every episode of "Dawson's Creek" because well
#1 It was my JAM
#2 The majority of the words they used were probably going to be on my SAT so I was able to study
#3 MOTHER EFFING PACEY AND JOEY WERE THE BEST COUPLE EVER. 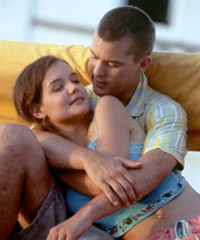 I was obsessed.
My mom knew that on Wednesdays I was unavailable due to a date that I had set up with my Sister Wife Joey and our mutual husband Pacey.
When they broke up (Spoiler Alert circe 2000) I was pretty much inconsolable.
I actually boycotted the last episodes of that season to really stick it to the producers and let them know how I really felt.
They got my message because in the SERIES finale they show that Joey picks Pacey.
You're welcome.
There was the "One Tree Hill" Haley and Nathan relationship.
Callie and George on "Grey's"
Jim & Pam's saga on "The Office" cost me quite a pretty penny in Tums. I was STRESSED OUT.
Then the Liz Lemon and Floyd situation on "30 Rock" which to be quite honest I'm still a little bitter about.
Currently I have fallen for essentially every single character on "Friday Night Lights"
The show has taken over my life.
It's "watch instantly" on Netflix and I watch about 4-5 one hour episodes at a time.
Let me give you the run down.
The show is set in Dillion, TX and centered around a high school football team, the Dillion Panthers.
There are several adorable characters but I'll highlight my top 3:
Matt Saracen, QB 1 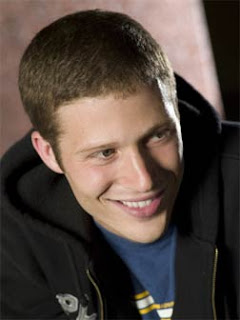 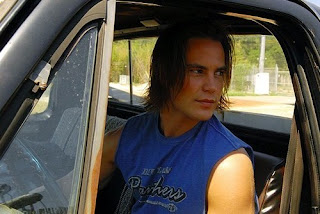 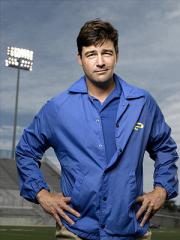 My friend Lauren and I have been watching simultaneously and have literally started talking about the characters as if we live in Dillion, Texas and are in fact friends with them.
We give them nicknames, talk about Coach Taylor like he's our biological father, and perhaps have looked into buying Dillion Panther jerseys.
(Ok that last one was all me but...I've thought about it.)
I was really concerned about my love for TV shows and how emotionally attached I get.
Then I was watching an episode of "30 Rock" where Liz Lemon said that TV was in fact her boyfriend and it not only:
1. Further reinforced that I am Liz Lemon
but also
2. That TV is in fact my boyfriend.
I can name random facts about people who are appearing in cameo roles.
I once realized that the main character in "Nick and Norah's Infinite Playlist" was also in a made for TV Lifetime Movie called, "She's Too Young."
Not impressed?
Agent Caitlin Todd on "NCIS" was also Gretchen on "Dawson's Creek."
And one time I realized that one of the former suspects on "Law & Order: SVU" was suddenly the DA four years later.
People don't forget L&W. People don't forget.
So I don't know if I need to started clicking the "in a relationship" box on forms or start claiming TV as a spouse on my taxes, but I have come to realize that
I, Ashley Antoinette Jones, am in love with television.
Sure I know Matt Saracen and Tim Riggins don't actually hang out together in a gym like this: 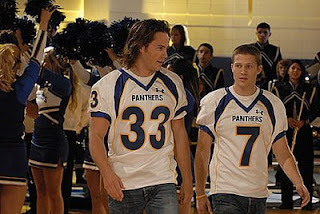 But my magical bf TV made it happen for me.
Side note: The sum of Matt and Tim's football numbers is 40.
With the rate I am going, that will oddly enough be the age when I recognize my SIMS family will no longer suffice as proper human contact.
Double Side Note: If any of you see me in any establishment attempting to purchase SIMS you have permission to not only give me the biggest wedgie ever but to also mug me.
I'll consider it an intervention.
Email Post