HER EFFING KIDS ARE HERE! By Ashley A. Jones

As I have shared before I have some redneck hillbilly traits.

For instance one summer I ate bologna and chip sandwiches with a side of Oodles of Noodles.
I had a mullet.
I've seen the Blue Collar Comedy Tour live in concert.
The Country Music Awards is my favorite awards show.
And lastly,
I was a huge wrestling fan.

Huge.
Like so huge that I had a wrestling t-shirt for every day of the week.
This went well with my mullet.
People told my dad he had a handsome son.
Had a not been so offended I would have taken that as a compliment.

I went to SEVERAL live events.
One time I got to go because I won a pair of tickets from a radio station at a bowling alley.

I would theorize with Tim Jones about plot lines and if the Undertaker was really an undertaker...and if so would he come kidnap me in my sleep.
(That was a legitimate conversation.)

I had trading cards.
I planned a lovely wedding to Jeff Hardy and then later Kevin Nash.
After that it was the Rock.

I was obsessed and would talk about it to anyone and everyone.
Barb tried to talk me out of spending my money on WWF entrance music CDs but I didn't listen.

Then I turned my attention to other things.
And by things I mean I found the light.
The light being
these 5 faces: 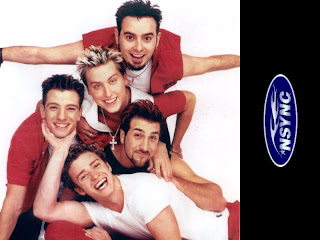 I mean don't get me wrong. I didn't totally turn my back.
I tuned in from time to time.
But I had moved on.
My relationship with the WWE hit its 7 year itch.

Recently the Rock, who is essentially the most attractive human alive, returned to the ring and I was sucked back in.
He was going to be the guest of host of Wrestlemania 27.
I found out that Buffalo Wild Wings would be showing it April 3rd for free.
Wings and Wrestling that's what Harrisonburg does.
I was in.
I told my friends.
I cleared my schedule.
I literally told people I was busy from 7-11 because I was watching professional wrestling.
I wrote it in pen in my planner.
I put it on my Outlook calendar.
I tweeted about it.
I
was
pumped.

Much to my surprise when I got to Bdubs, there were no seats.
No one was coming in and no one was coming out.
To say I went in to panic mode would be a fairly accurate statement.
I pulled out my Droid and googled
"Places in Harrisonburg showing Wrestlemania 27"

Who would have known, but I actually got results.
One other bar in town was showing it:

Let me set the scene.

Time Out is located inside Valley Lanes, Harrisonburg's finest bowling establishment.
It is a small bar, where smoking inside is still allowed.
A small woman who I'd say is about 900 years old greets you at the door where you are to hand over $6.

Somehow the divine wrestling gods were looking down on my friends and I
because there were exactly four of us and four available seats.
We sat at table seven with these fine folks: 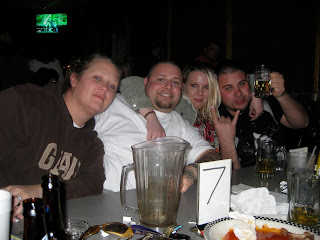 The blonde to the right planned her wedding the entire time.
Her colors (in case you were wondering) are sage green and pink.
She also asked the woman in the GAP sweatshirt to be a bridesmaid in her wedding because there "wasn't anyway her sister was going to be."
The way her night was going she was going to ask me or my friend Sara to officiate.
She also attempted to learn Spanish.
A woman (not pictured) kept burping as if she were a trucker and repeatedly spoke of the hot flashes she got when John Cena was on screen.
The guy in the middle, Nicco, was considering where to get his next tattoo.
His options: other side of his neck orrr other hand.
He was really awesome actually and laughed at my jokes.
As you know I'll do anything for a laugh so I immediately liked him.

During one of the matches the cable went out: 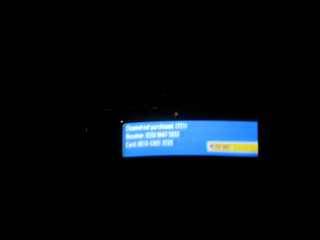 And we thought for certain a fight was going to break out similar to that of the fight scene in Anchorman. 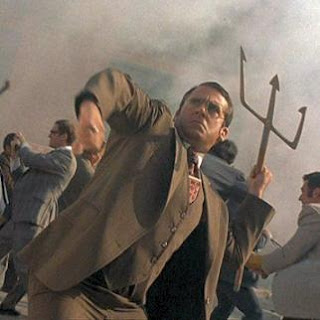 Luckily crisis was averted and we remained safe.
My friend Dan and I had a fantastic time. 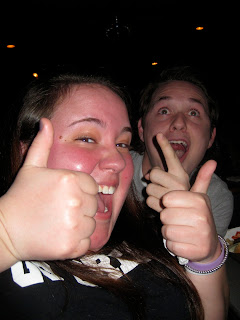 Sara was a trooper and Bryan had a great time. 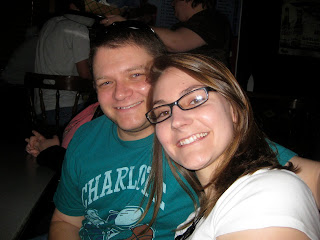 Until it went down.
John Cena lost and apparently a patron was real happy about it.
He cursed out the entire bar like we were all in fact John Cena himself, or in someway related to him.
A woman who weighed approximately half of an 18 wheeler, stormed over and got in said man's face and said:
"SCUSE ME CAN YOU HAVE SOME CLASS MY F*#KING KIDS ARE HERE. WHY YOU GOTTA RUN YOUR MOUTH LIKE THAT?! HOW DARE YOU!"
Then she bucked at him and took her children and went home.
Heaven forbid her children hear John Cena get lambasted--seeing their mother in a bar fight is far more acceptable.
It was awesome.
Hopefully it's not too early to make reservations at that establishment for
Wrestlemania 28.
My fingers are crossed.
Email Post