I didn't want my first vlog to happen this way....but here it is...

Once upon a time 3 friends went to a Phillies game. 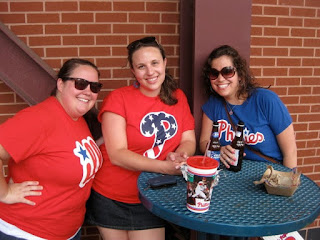 They were excited to be there! 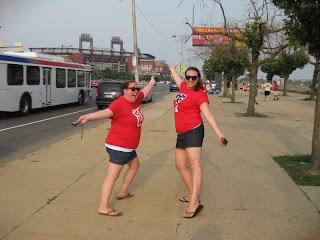 They ate Philly's famous Chickies & Pete Crab Fries.
If the narrator of this story could have marry a bucket of fries it would have happened
June 9th 2011. 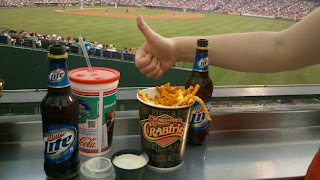 They were taking adorable pictures 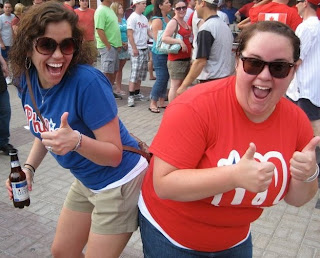 While taking a "family photo" a friendly man from London who Jones named Ringo, jumped in.... ﻿ 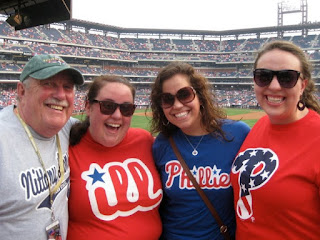 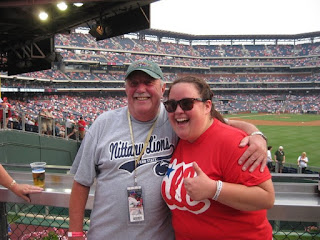 After deciding to take the journey up to their seats the 3 friends realized the sky was looking a little ominous.
Which was weird because it was sunny about .3 seconds before hand. 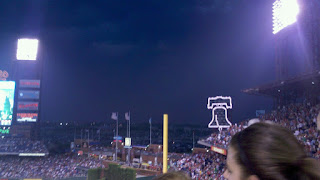 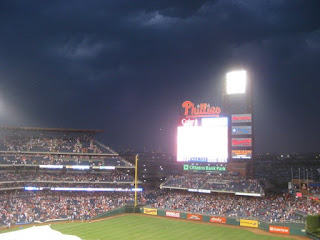 Men with a tarp began to cover the field 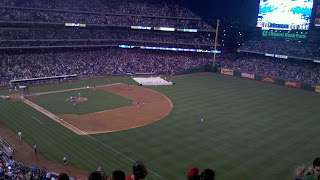 Then the tarp was blown off by the terrifying wind 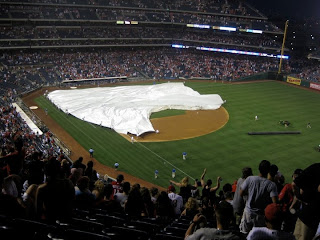 The three friends moved to the top of the stadium as  to not get hit by the rain...
Then what can only be described as a mini rapture began to happen.
Rain came down sideways hitting the 3 friends as the wind pushed them up against the top tier fence.
A man began to shield his children and tell them they were going to be OK.
Jones looked at Taylor and yelled out,
"THIS IS HOW WE DIE."
That was probably not helpful to the man consoling the children, but whatever.
Jesus also seemed to make appearance as the three friends were sure that they were heading towards the light.
Seen in the picture below. 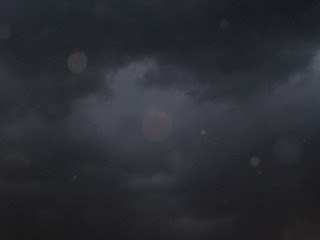 An older man who was a ticket usher yelled out,
"I THINK YOU SHOULD THINK ABOUT MOVING OUT OF THE RAIN!"
To which Jones replied,
"Really?!"
After the three friends realized the only way out was to brave the flooded stairs they finally made it to shelter.
Which proved to be mass chaos. 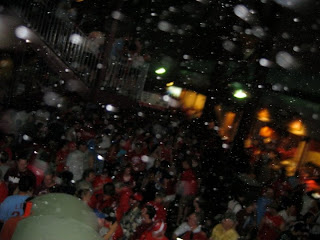 Finally they felt safe enough to leave the park and walk to the public transportation.
The End.
Ok not really the end.
On the real last night was probably one of the weirdest/scariest/funniest nights of my life.
A friendly piece of advice: When caught in a storm do not move towards it.
In our case we literally moved closer to the sky.
I could have literally high fived Jesus.
Taylor and I were terrified.
We clung together as the 58 mph wind whipped around us.
Meanwhile Robinson was having the time of her life.
She was laughing and I quote "feeling exhilirated."
She literally looked she was at a water park.
Meanwhile me and Taylor are holding hands clinging together like Jack and Rose from "Titanic"
She was KING OF THE WORLD!
Taylor and I were saying we'd never let go.
After it stopped raining we left the park and I thought it would be a great idea to capture the terrifying experience we had all been thru.
I would like to apologize for the following:
1. My appearance. I look like a drowned raccoon.
2. For the high pitch of my voice.
3. For this being the first time you have ever seen me in motion.
4. For saying that "all of this was looking pretty hot..." and then saying I would edit that part out. I don't know how to edit.

To say the least the ride home was uncomfortable: 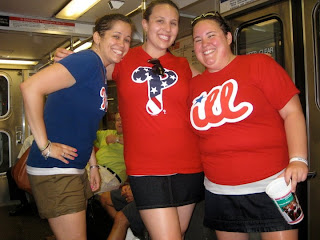 It was kind of a bummer leaving after the 3rd inning.
However sitting in wet denim would have been even more of a bummer.
The Phillies ended up losing in extra innings.
So that was sad but I vow to go back.
I will build an arc first and make sure I have it parked outside just in case.
No but seriously.

The End.
(For real this time.)