Why do I feel like such a country mouse?

Greetings from Philly!
I've been here for about a week and a half now and so far I have not been killed and have managed my way around the city pretty well.
I gotta say I feel a little bit like a country bumpkin.
I've grown up right outside DC my whole life.
However living in suburbia is definitely not the same as living IN a city.
I've started reading maps.
It turns out that is something I'm good at.
I'm thinking about putting it on my resume.


For those of you who don't know why I'm in Philly
(or as I like to call it Fillet...it's classier)
do let me fill you in:
I'm working for New Student Orientation at Drexel University.
I worked Orientation for 2 years at Longwood University with our fearless leader Sarah Whitley and it was probably one of my favorite college experiences.

Now that you know why I'm here let me fill you in on adventures thus far.
First I shall show you my living arrangements:
I live in a residence hall on campus with these two fools
Taylor & Ashley. 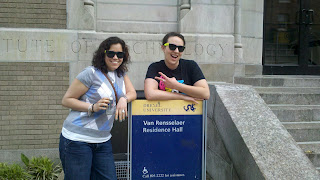 They are fairly fantastic.
We've been together for 2 weeks and we are basically an old married couple of 3.

For awhile I had a bunk bed.
I called it my tree house. 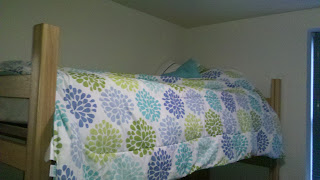 I don't know if you've ever heard of puppy steps. 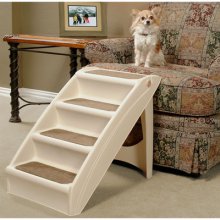 They are steps to make climbing onto furniture easier for dogs.
Pretty self-explanatory I guess.
Anyway I made myself a set of those in order to make it easier for me to climb on furniture as well.
The process was as follows:

1. Step on chair
2. Step up onto dresser
3. Throw self on bed and pray to the bunk bed God that I didn't rocket back off the bed and fall to my death.
(Death may be extreme...I probably would just have fallen on my collarbone.)

Before I made the voyage to slumber I would load myself up with stuff that I needed like a pack mule.
I would bring my book, cell phone, and ipod.
The worst was when I forgot one of my essentials and had to climb all the way back down.
Luckily two burly men came and took it down so now I just try to muster up some upper body strength to get into my slightly raised bed.

These are truly what I like to call "White Girl Problems" but whatever.

Let me take you on a mini tour of palatial estate.

First, we live on the 3th floor: 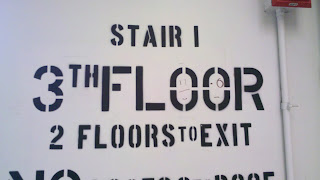 Not the 3rd so don't get it twisted. 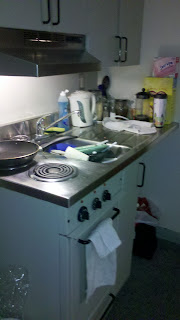 Here is the rest of our living room and evidence of our nightly activities.
I told Robinson I was taking this picture for my blog and she clearly reacted with such delight. 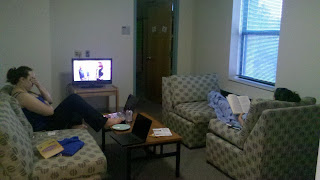 I would show you our bathroom but it has one flickering light and it wouldn't have been so appealing to the eye.
We call it the crack house because of the lighting.
It's a cozy little place and for a married trio of interns we like it just fine.
We also got that TV for free.
We like to call that a win.

We've taken in quite a bit of the city.
We saw the Liberty Bell. 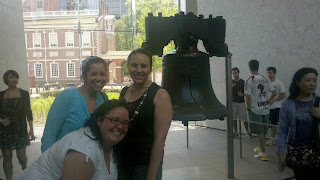 We see B. Frank everywhere 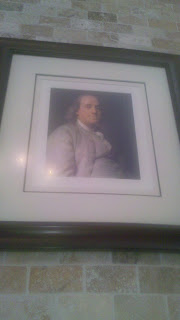 This picture was actually taken at a family restaurant.
At this restaurant a woman came in holding a bag with some sort of animal in it.
Upon further inspection Robinson and I realized that the animal in that bag was a cat.
She told the waitress who then told us that the woman wrangles her cat into that bag every time she leaves the house.
"Brings it with her everywhere...her husband said she doesn't leave home without it."
I love this city for the wonderful weirdos it houses.

Robinson and I also went to the LOVE statue.
While we were waiting in line to take a picture 2 overly large sweaty gentlemen informed us that there would be a photo shoot going on for a few minutes and
"Did we mind waiting?"

I saw the model in front of us and realized what kind of experience this would be so I answered for the group and let them know that they could go right ahead.
Here she is in all her glory: 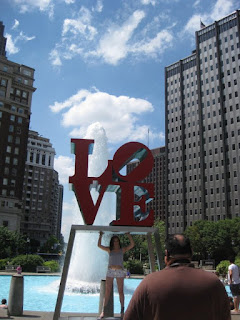 The two men that were with her really had a lot of kidnapper type qualities so I was concerned that she felt comfortable posing like Kim Kardashian with them all day.

What is even more awkward about the whole "photo shoot" was that I was thinking about wearing that same outfit.
Close call friends.
Close call.

We've also made a voyage to Atlantic City to hang out on the beach.
These Jersey hotties were there.
So...I'm probably gonna hang out there every weekend.
You know to scam on these FHCs.
(Future Husband Candidates) 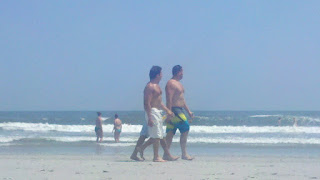 Fun fact about AC: they sell gems like these: 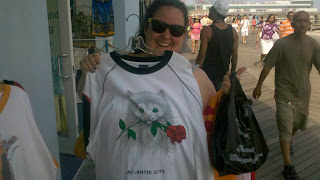 Don't worry I bought enough for everyone.

I also started running again.
Which to be quite honest is not fun at all.
However, the Rec Center at Drexel is quite the fancy pants establishment.
The treadmills have TVs attached to them! 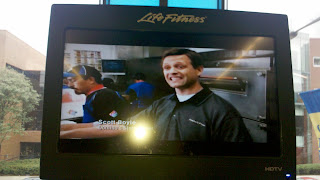 The other day while trying not to die running I was watching an E! True Hollywood Special about the 15 Most Shocking kidnappings.
I don't know what it was but I ran a lot quicker that day.
I was no longer training for a potential 5k.
I think I was training for a potential kidnapping.
I just kept thinking
"NO ONE WILL CATCH ME!"
Now that I think about it someone could have very easily caught me at the time as I was running in place but that is neither here or there.

And yes I was on the treadmill walking when I took this picture.

Work has been great too.
I have an awkward work story as well but that will be for later.
It doesn't rival the "I effing love wings'" scene but it is still a classic
"Oh Jones..." moment.

Hope everyone is having a great week!
There is more to come from PA!

Side note: My good friend Colleen over at the "Lunchbox Diaries" does a great little discussion question at the end of her blog posts and I think that I'm going to start doing that here too!