Are you there God? It's me Jones.

Hello friends!
Since my last post I have moved back to VA.
I'm super bummed about leaving Filet.
It was honestly the best summer I've ever had.
No exaggeration.
Before I start weeping into my keyboard and reminiscing about numerous group dance sessions with these fools: 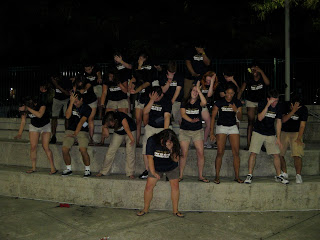 Let's move onnnn...
I feel that is important to share something with you.
One of my last nights in Philly I went out with some of my friends.
Things got a little out of hand.
Don't get me wrong I didn't get arrested
Or like rap battle with a homeless person
(although I'm writing that on my bucket list as we speak...)
but enough libation was done that the next day I was pretty sure I saw the light.
And I was heading right for it.
Of course that was a day at work where there was a lot of talking and presenting and listening to important people talk and present.
I was panicked.
What if I make a fool out of myself
(excuse this next part...)
& what if vom during a meeting?
I would never get hired again.
So I did the only logical thing.
I started making deals with the big Dude upstairs.
I'm not a really religious person but I was that day.
I started bartering.
This is kind of how it went:
Hey God, it's me Jones...are you home?
Oh good I'm glad I could catch you before lunch.
So here's the thing.
I'm feeling a little ....hungover.
I was hoping you could maybe do me a solid and make it so that I don't do anything incredibly embarrassing during this meeting.
What's in it for you?
Oh well...I hadn't thought about that.
What if I promise to be ok with being single until I'm 29?
Wait no...28...
Ok 27.
Let's settle on 27.
I won't ask for you to point me in the direction of boyfriend material for 3 whole years.
Does that sound like a deal?
I guess it did because I made it through my day just fine.
Ok yes I did wear a sweatshirt over my dress when I was at my desk because I was cold and weak: 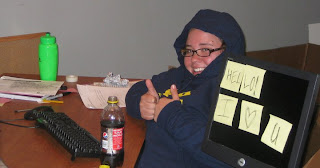 but It's a trend that I'm sure will sweep the nation.
The next day I started thinking...
I just promised 3 whole years of singlehood.
I mean granted it's not like I've had a whole lot of luck
24 years of being a party of 1 isn't so bad.
Ok not 24 whole years I wasn't trying to find myself a boyfriend when I was 3.
Although I did get married to a very nice boy in preschool.
We had the marriage annulled.
Our parents felt we were too young.
Luckily we did have a lovely honeymoon on the swing set so it wasn't a total bust.
Three years is what I promised.
Now I don't know if there a stipulations.
I also know I didn't sign a binding contract...so hopefully there are some loop holes.
Mainly because I want to be a girl on "Say Yes to the Dress" at some point before it goes off the air.
Here's why:
I feel like I would show what it's really like to try on a wedding dress.
These women have these touching moments with their mothers where they cry because they've found the perfect dress.
I know I'm going to cry with Barb but it's going to be because I'm sweating, crying about my lunch lady arms, and potentially because I need my inhaler.
True Life.
Barb assured me I would be beautiful but she also
thought that this was beautiful in 5th grade:

Yep. That's a mullet.
And yup that's a shirt of Daffy Duck driving a taxi.
I'm actually hoping that's the picture they show when they're doing my back story.
I also want to be on the show to meet Randy 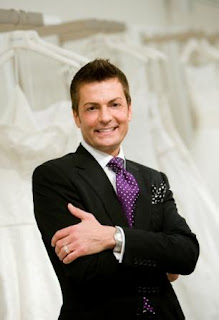 (source)
I'm just hoping that the show is on in three years.
I want to be America's Sweaty Bridal Sweetheart.
Email Post