I am the worst blogger.
TWO WHOLE WEEKS OF NEGLECT.
How dare I.

Let me fill you in on what's been going on.

My friend & sorority sister Stef works at UNC Wilmington so it was perfect excuse for
5 of my favorite sorority sisters and I to make a trip down to see her. 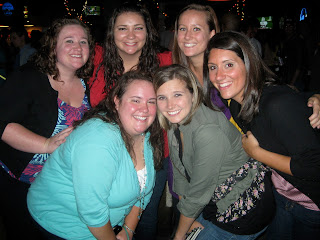 She asked us what we wanted to do when we came to visit and the only thing that came to mind was:
Find Dawson and his creek.

Dawson's Creek was filmed in the Wilmington and seeing as I am still extremely attached to Joey and Pacey I was extremely pumped to be in such a historical place.

Stef informed me that there wasn't really a "Dawson's Creek" tour.
I reacted like so: 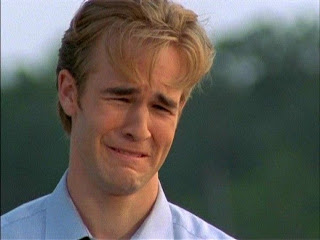 Then she told me that she would take us to the Screen Gems tour which showed you the set of "One Tree Hill."
I was immediately renewed with joy.

The tour was amazing.
I walked around Nathan and Haley's house and saw Julian and Brooke's living room.
I answered the tour guides questions with creepy speed and accuracy.
It was a dream come true.

I was still a little bitter that there was no set left up from the "Creek" and would turn corners yelling out
"DAWSON?!"

I also may have pulled out my phone at some point to play the "Dawson's Creek" theme song as we walked the studio lot.
That can not be confirmed or denied.

Then we walked outside and the light shined down upon this awkward mural: 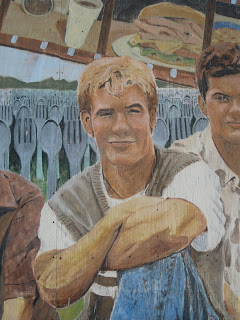 My friend Molly made the following observation:

The tour guide said that the mural used to hang in the cafeteria thus the forks and spoons in the background but I still pumped that a little piece of the "Creek" was still around.
So much so that I made everyone pose it front of it after the tour was over. 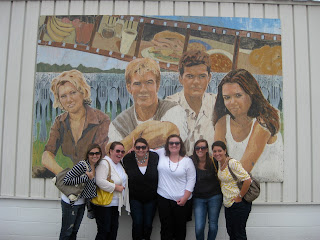 We also went to a bar that had skee ball. It was awesome. 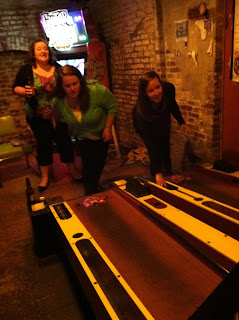 I have been in a traveling mood I guess because I also recently went to meet my nephew
Cameron. 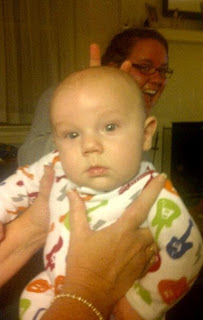 You all are familiar with his mom. 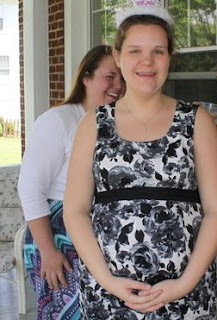 But seriously he was one of the cutest baby nuggets I have ever met.
I mean he fully cooperated when I did this: 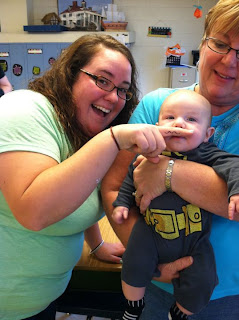 How can you not love him?

With all this driving I've been doing a lot of thinking.
Then I realized the thoughts were probably a little off center to what most people think about when they drive.
So I began keeping a running tally of what tumble weeds of quandary roled thru my brain.

Are you ready for these profound bombs that are about to get dropped?

Things Ashley A. Jones Thinks About While Driving
Instead of Paying Attention to the Road:

-How has Snooki never broken an ankle while running through the streets of Italy in those tall heels?

-Why do I care about Snooki's bone health?

-Whatever happened to the girl group DREAM?

-Now that we're on that topic brain--whatever happened to Ashley Parker Angel and the band BBMak?

-I wonder if they're doing well in this economy? I hope so.

-How do rappers write their rhymes?

-What would I look like if I shaved my head?

-I ate a lot of bologna sandwiches when I was little.

-Why doesn't salsa taste as good in a jar as it does in a Mexican restaurant?

-Why do I crave cheese doodles more than any other food item when I'm driving long distances?

-How long do people have to practice in order to say the alphabet backwards?

-I hope Ellen Degeneres is nice in person

-That Apple D guy from the Black Eyed Peas is scary

And there you have it folks.
If you ever see me driving and think
"Dang that girl is deep in thought...she must have a lot on her mind"
think again.