I am a Twilight saga fan.
Wait...don't go just yet.
Let me explain myself.
You see, the books came highly recommended.
Seeing as I just graduated from my undergrad and had nothing to do but apply for jobs and watch "The Landlord" over and over again (it was 2008 people), I thought I'd head over to the ole' B&N and check them out.
I read the first few pages of the first one and was hooked.
I quickly gathered up the rest of the books like I was a chipmunk storing up acorns in my cheeks for the winter, checked out like I was buying drugs, and immediately went home.
Dramatic rendering of the incident below: 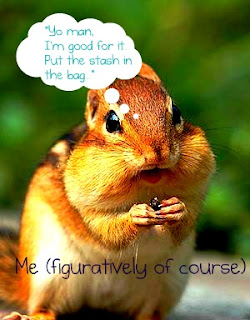 I loved the books.
Thought they were amazing.
Mourned for a short period after because I wasn't sure what
could top it.
When the movies started coming out,
I'll admit it, I went to a midnight preview...of 3 of them.
But I didn't dress up and didn't scream when Jacob took his shirt off.
(Well out loud...in my head full on boy band concert type yelling was going down.)
I didn't go the midnight showing for "Breaking Dawn" but did have the plan to see it opening day.
Which I did.
I'm going to give you the run down of the event leading up to the movie, and then I will give you my review.
Let's proceed.
The night started off well.
I went with my bff Sara and our friend from work Shelly.
Shelly threatened told us she was going to make us t-shirts,
but made us some sweet headbands instead.
She said we needed to look classy for the wedding between Edward and Bella.
We went with it. 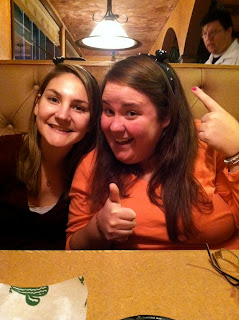 And looked pretty awesome.
We ate my weight in Mexican food and ventured off the theater.
As soon as we arrived two things happened:
1. There was an advertisement for a $6 souvenir cup.
I don't know if you know this about me but I love a good souvenir cup.
I was hoping the movie was going to be a goodie so I thought heck yes I will add to my collection.
So I bought one: 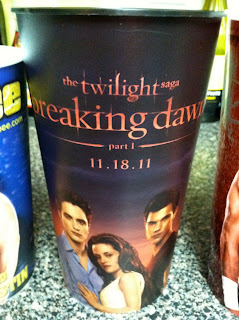 & it now sits among my other precious gems. 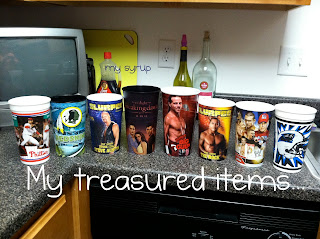 (Don't judge that more than half are wrestling cups from 7-11)
2. I found the number 1 item on my birthday and Christmas list this year. 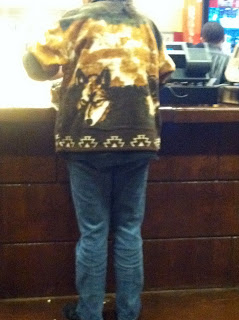 It's good for all occasions.
And looks super warm.
We made our way to the line and after they checked our tickets, social security numbers, finger printed us, and did a retinal eye scan, they let us in to find our seats.
I didn't think R.Patz was going to make a grand entrance from the ceiling or appear in cloud of smoke, so why I needed a full body pat down to sit in a theater in Waynesboro, VA will forever remain a mystery.
Then the movie started.
Let me just say that I really wanted this movie to be good.
I wanted to ignore the fact that a movie reviewer on the radio retitled it,
"Breaking Wind."
But they were right.
It was really bad.
Here are my top 5 reasons "Breaking Dawn" was a suckfest:
5. The wedding was super awkward.
The "you may now kiss the bride" scene lasted for a good 45 seconds.
If I kissed my husband for 45 seconds during my wedding ceremony,
Barb Jones would most likely get out of her seat and sandwich herself between us, and tell us "not in front of company."
Actually probably not, by the time I get married she'll just be so happy I'm not going to be a spinster she'll let anything fly.
However, generally
that is not the time to be groping all up on somebody.
People are watching...and food is most likely waiting at the reception that's not going to eat itself.
Plus Bella's hair looked nice one minute and then the next looked like someone dragged her through a bramble bush.
4. The Wolves.
Here's the thing guys.
There are real wolves that they use for shows like "True Blood" & "Teen Wolf"
They train them.
So far 0 actors have been eaten.
I think...
Why the f wasn't that an option for this movie?
Because let me tell you something, these computer dogs were not fooling anybody. 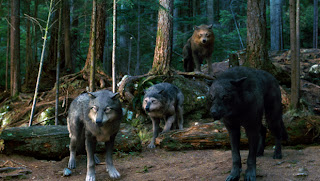 3.  During their much talked about honeymoon scenes, they spend half the time playing chess. 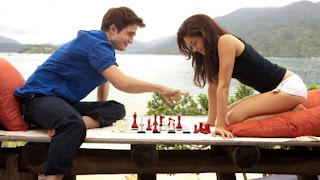 I'm sorry, what?
Chess?
Really?
Shelly leaned over at one point and said,
"That's lame. Don't do that on your honeymoon."
Literally the only experience I have with chess, is from when Ron Weasley played the life sized version in the first Harry Potter movie and got a concussion.
Chess ruins peoples' lives.
I'm not going out like a punk.
Nor am I going to nerd it up during my island vacation with my vampire husband.
I also realize that I will not have an island vacation with my vampire husband as they do not exist.
I mean Connect Four, maybe.
A good game of Rummy, why not?
But not chess.
Losers.
2. Was Bella Swan also in the Thriller video? 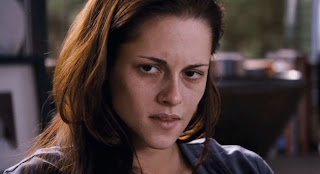 This was only the beginning.
Those producers may not have been able to make a wolf look like a wolf, but they sure did help Kristen Stewart look like an extra in Michael Jackson's
epic music video.
I spent the majority of the movie kind of hoping she would just break into dance.
She didn't.
1. The birthing scene is why I will never sleep again.
So I don't think that I'm ever going to be faced with a situation where I will be carrying a half baby half vampire fetus but should that ever occur, I'm letting you know right now I'm fine with you fools taking me out.
That crap was terrifying.
It did not sooth my fears of pregnancy at all.
The baby also craved blood folks, which she then drank out of a cup like a damn milkshake.
I've heard of some wacky pregnancy cravings but O- was never one of them.
To make the situation even more traumatizing, they not only showed the baby breaking her ribs and back to get out, it also showed it punching, kicking and biting.
I mean in real life I know that's not what happens per say buttttt holy crap dude.
I'm not trying to chance it.
I don't care if you are a pretty vampire husband.
Things are on lockdown until we have a serious family planning discussion.
We will adopt.
Be the Brad Pitt & Angelina Jolie of the Underworld.
I've taken this joke to far...
Overall the movie was a huge let down.
I didn't think it was going to be what cinematic dreams are made of but it was kind of a bummer.
Harry Potter never played me like that.
Ever.
If Twilight and Harry Potter series were characters on the "Jersey Shore," Twilight would be "The Situation" running into walls, and Harry Potter would be the dynamic Pauly D and Vinny duo.
If they were brothers, Twilight would be the cute but dumb one, while HP would be husband material.
If they were boy bands, Twilight would be BSB while HP would be *NSYNC.
(I can always bring it back there...always.)
You catch my drift.
Twilight was bologna.
And I give it:
TWO FANGS DOWN
Email Post