I love music.
In no way is my taste refined.
At all.


Let us revisit the fact that I have seen *NSYNC 5 times in concert.
I camped out for tickets at least 3 of those times.
One of those times I had Tim waiting in line, while I was on the phone, and my best friend Marisa was using dial up to get the tickets online.
It was a system.
We were obsessed passionate.
Some might say nerds. 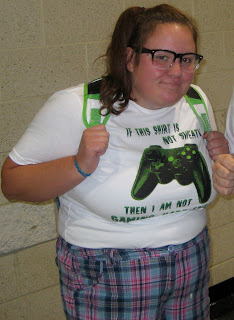 I embrace it.
We can debate why *NSYNC is better than the Backstreet Boys all day long.
(Please read the above statement as such: I will street fight anyone who tells me Backstreet Boys are superior to *NSYNC. And in this street fight prison rules apply.)
But that's not the point of this blog.
Plus I want to give all the pro-BSB fans time to justify why having Howie in your group was an asset.


I have also seen the "American Idols Live Tour" twice.
Once to see the original crew because I love Kelly Clarkson.
She is the song bird of our generation people.


The other to see Kris Allen.
Because, well, he's precious OK?

I love cheesy pop music.
I like country music.
(Looking at you Timothy McGraw...if you could see me now I'm being shooting the finger guns at you in a very creepy way. So you're welcome.) 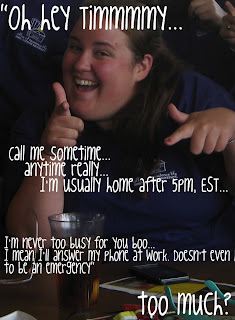 I like rap.
(Also looking at you Eminem, but not giving the finger guns because I have a feeling that would end poorly for me. I've seen "8 Mile"  & I don't mess with people from Detroit because of it.)
I like the hits of the 70s, 80s, 90s, and today folks.
I don't have high standards.

Throw down a good beat and I'm all in.

Don't worry I hate myself for that last sentence too.

But there is one song that is on the radio now that makes me want to
...
how do I say this in a polite way?
Oh I know:
THROW MYSELF IN FRONT OF A BUS.

Yeah that's right, I'm talking to you Mr. Saxobeat.
Alexandra Stan you are the current bane of my existence.
Why?
Why is this song allowed.
Once the beat gets going it just repeats all day long.
I don't know the words and so I just randomly say,
"Mr. Saxobeat!" and then make the saxophone noise that accompanies it.
I am driving myself crazy.
I forced myself to listen to it in its' entirety the other day and thought the following:
"Driving across country with Kate Gosselin and her children would be better than listening to this for one more second."

This may seem dramatic.
I know.
However, when repetitive sounds (i.e: tapping, clicking, repetitive sax beats)
are your biggest pet peeve,
it is safe to say that this song would not be chicken noodle soup for my soul.

To sum up:
It makes me want to punch dance out my rage.


I was describing my hatred before class yesterday
and one of my classmates asked if I was talking about
the "Sexy Saxophone Guy."
I told him I wasn't really sure what Mr. Saxobeat looked like, but he didn't sound very attractive via Ms. Stan's description.

He then showed me my new favorite youtube sensation.
Feast your eyes on this bad boy:

I still hate the song Mr. Saxobeat with the fire of 1,000 suns
but now I picture Mr. Sexy Saxophone Guy being who she speaks of and I can kind of handle it.

I think I would sing about a dude with luscious locks and a mean pair of suspenders too.
I see what you did there A. Stan.
Well played.
Email Post