I think I have expressed this before but let me repeat:
I.love.award.shows.
Barb & I have a tradish of ordering Chinese food and watching
all the events from their arrivals to the final credits.
It's glamorous.
Since I've been in Harrisonburg I've had to continue this on my own.
Trust that I don't wait for this day only to eat Chinese food alone in my basement.
THAT happens frequently.
So frequently in fact that
this year without Barb I ate pizza while yelling at the red carpet.
If that doesn't paint a picture of a future American sweetheart I don't know what will.
Also I would like to clarify that I was yelling at the red carpet presentation on E!
Not at a red carpet I rolled out to feel fancy and then scream obscenities to when all the breadsticks were gone.
This year's Golden Globes was super entertaining.
How can an event go wrong when Tina Fey photo bombs on live TV?

(Thank you Molly for this gem. Side note: Check out her blog it's fantastic.)
There were many notable moments but the one that really stood out to me was Madonna's TERRIBLE acceptance speech.
She is truly the pits.
Speaking of pits.
Her arms are insane.
She also held her award like it was a shake weight: 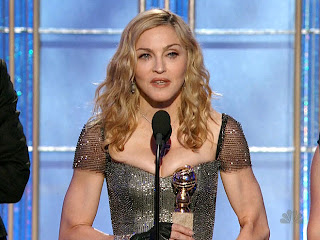 She said "MYYYYY MOVIE" approximately a million times.
That's a rough estimate.
She was really just...douchey.
I told Joe how annoyed I was and he suggested
that I write what my own acceptance speech would sound like.
So here it is:


Naturally I would be nominated for Best Actress in a Drama or Mini Series for my gritty portrayal of Rosie O'Donnell's rise to fame.
"Bed Rocked" 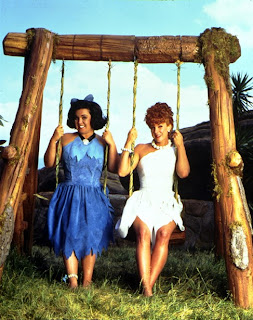 It would be produced by Joe because he also helped come up with the title.
I'd have to give him rights to it and money.
He has a list of demands.


Anyway...
When they read my name as of nominees I would look like this: 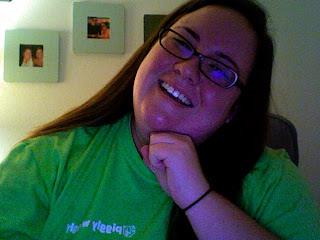 (Yes I would probably be wearing a Piggly Wiggly shirt. As a shout out to my bff Sara L. who purchased it for me on my 25th birthday)
Then when they finally called my name, telling me I had won over Helen Mirren, Kate Winslet, and that fake wench Angelina Jolie, my reaction would be as such: 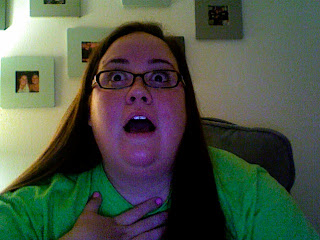 When I got on stage I would most likely do a bow: 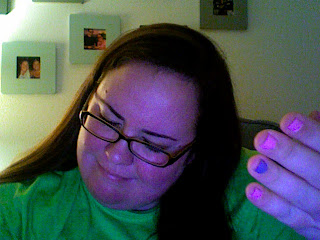 Followed by wiping my imaginary tears (read: sweat) away: 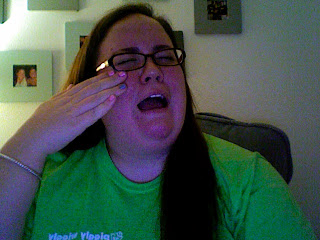 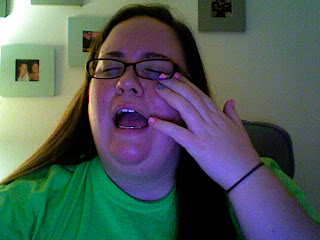 I would do my best not to look like this: 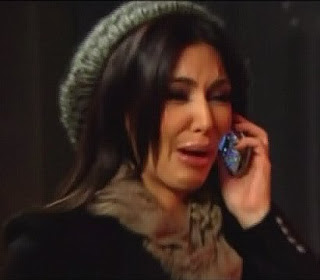 And then would go into the following speech:
"I would like to thank the Hollywood Foreign Press for this great award.
It has always been my dream to avenge Jennifer Aniston and I believe that by winning this I in some way have stuck it to you Jolie.
#peopledon'tforget
Secondly I'd like to thank my beautiful brother husbands:
Adam, George, Ryan, Jake, & Leo.
They said we'd never make this work but look at us now.
I wouldn't trade our love and communal compound for anything else.
Barb & Tim, thank you for being my support system.
Barb thank you for suggesting I get that horrible mullet hair cut when I was 10.
And Tim thank you for allowing me to wear your BIG DOG t-shirts, wind pants, and encouraging me to purchase several pairs of CROCS.
Because of that horrible life choice, I was able to identify with Rosie's style for the majority of her career.
To my friends you know that I love you.
To adopted sea lion and baby white tiger, 'Mama loves you."
And to my fans thank you for supporting me from my beginnings as the girl who ate in every scene of her season of "The Bachelor" to now, as a rough and tumble Rosie O who fought John Goodman for the last donut on the set of "The Flinstones."
You keep me humble."
Then I would walk in the wrong direction on purpose so the award girl would have to wrangle me to the correct side like a rodeo clown and I would begin my night of photo bombing other winners and stealing all of the good food out of everyone's swag bags.
Email Post
Labels: golden globes SPEEEECH