Sleeping with the fishes

Well I've either stooped to a new low or reached a new high because this week I have started a "Fantasy Bachelor" team. 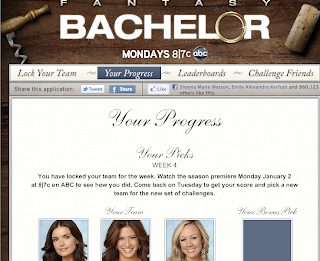 My friend Carly told me about it and now Dan is in on the action.
I'm so excited.

Now onto the episode.

This week's episode of "The Bachelor" was .....a lot.
Some things remain the same.
Ben has bangs.
Ben needs a hair straightener.
Blah blah blah.

Ben took the ladies to Salt Lake City.
Chris informed the ladies of the following:

After they were shown their living arrangements the drama began.
What I've noticed is that Ben takes these girls to REALLY secluded areas.
First he took Rachel (by helicopter) to a quiet spot on in the mountains so they could canoe and have a picnic & the most awkward date ever.
If the only thing a guy could come up with during a full minute of silence while staring at you is
"Oh and over there is a beaver dam..."
You should probably just call your helicopter and tell him you're ready to be picked up.
Although the presence of a woodland creature probably would have made the occasion much more enjoyable for both of them. 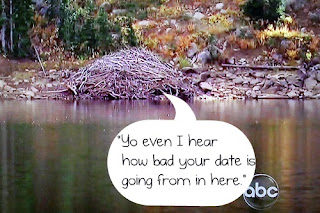 Then he took the red head, (Jennifer?), to some crater (yes an actual crater)
where they dove into the abyss.
Then made out while treading water.
To me both of those things do not sound romantic.
They sound tiring and stressful.
Call me old fashioned.
The group date is when things got really interesting. Ben took the girls horse back riding and fly fishing.
For some reason everyone knew how to ride a horse without a farm attendant guiding them.
It was impressive.
When the women found out they were fly fishing things got real.
They were fishing like Ben was going to leave them out in the wilderness to fend for themselves.
It made me wonder:

Of course all the women were hoping that a river shark was going to swim by and eat Courtney.
It didn't happen.
What did happen was that she was the first one to catch a fish. 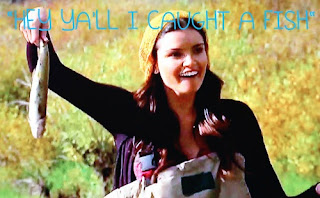 Of course she used her baby voice and was "adorable to Ben."
Meanwhile Kacie B was becoming a little unhinged.
That stressed me out more than Courtney's murderous glances at the other women. 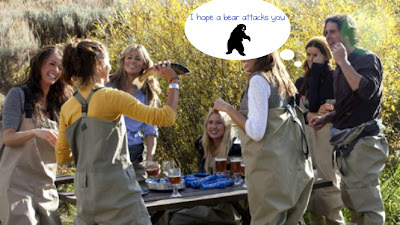 I need her to remain sane as she is the one that I see going all the way to the end.

She did end up coming around and having a good conversation with Ben.
I was certain she was going to get the rose during the date.
But Courtney threw a hissy fit which made Ben feel bad for her thus giving her the rose.
That girl is a genius.
Ben is falling right into her trap.
It.is.fascinating.
Something else happened this episode that was confusing.
I felt that women who I'd never seen before were showing up.
First it was a
girl named Samantha (who?) that said that she wanted alone time with Ben.
She also said that she should already have a ring on her finger because they had such a connection.
Dan & I had the same reactions:

Ben was also confused by who she was, because he said
"Thanks but no thanks" and sent her packing.
Later on in the night he gave a rose to Elise.

Maybe they're just filler dates?
I'm expecting him to give a rose to like a dude hanging out by the craft services table next.
At the award rose ceremony a "meow down" as ABC called it, occured between Courtney and Emily.
Emily tried to clue Ben in on C-Money.
He was not having it.
Word got back to Courtney and I'm fairly certain Emily became a missing person after filming.
She not only told Emily to "watch herself":

But she also rubbed that damn rose all over her face again.
Apparently the rose rub is a thing that is sweeping the nation because I got the following text message from my little: 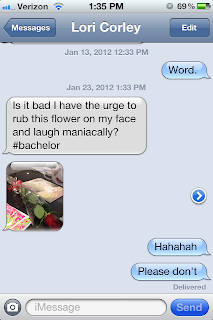 Courtney also kept saying,
"I'm a really nice person..."
which was followed by
"I just want to rip her head off and verbally assault her."
I couldddd be wrong but that isn't usually considered nice.

At the end of the day he said good-bye to Monica:

At the end of the episode Ben told the women that he was taking them to Puerto Rico.
Most of the women acted like they were on an "Oprah's Favorite Things" episode.
Courtney on the other hand said, "I was there two months ago."

She is the Gretchen Weiners of this show.
I can't wait to see what happens next week.
She goes skinny dipping with Ben.
SKINNY DIPPING.
It's getting real folks.
It is getting reallllllllllllll.
Email Post
Labels: bachelor