THANKS FOR NOTHING SEACREST

Tonight was the season finale of Kourtney & Kim Take New York.
I've watched the show all season.
Waiting.
Just waiting for the final blow up.
The only really shocking thing of the entire episode was realizing that I agreed with Kris Humphries.
Kris and Kim were fighting over closet space in her palatial LA home.
She claimed there was no room.
He said she was being awful.
I agreed:

Kris was right one time.
That's all I'll give him credit for.
Now Joe will never let me live it down, because he is firmly back on Kris's side.
The battle never ends.
After all the crying, ghost whispering, and passive aggressive fighting I thought it was all coming down to the big shabang.
And you know what?
THEY DIDN'T EVEN SHOW THE EFFING BREAK UP.
I THOUGHT THEY WERE GOING TO SHOW US THEM FILMING AN EPISODE OF DIVORCE COURT.
OR RETURNING WEDDING GIFTS.
OR ACTUALLY YELLING:
"I WANT A DIVORCE."
We got nothing.
Well that's not true.
We got strung along for 3 months with the promise that we would see it all end.
Which I think as a collective audience we deserve after devoting 4 hours to the wedding special and an hour every Sunday to their lives.
(Was that just me?)
Instead we just had Kris trolling around the house looking for Kim while carrying the baby like it was a bag of chips he found on top of the fridge.
My friend Lauren tweeted what I truly believe Kris thought in that moment: 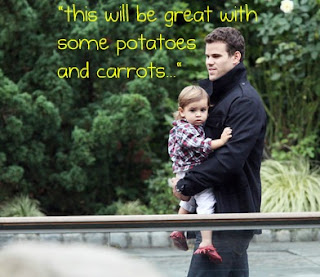 I mean carrying Mason with him to find his crying wife is a good move.
The kid is cute.
Plus he has an iPad.
(I have a Kindle Fire...do you think he'd still be friends with me?)
In hindsight I should have just checked out like Joey:

I'm ready for Khloe & Lamar.
They are adorable.
Joe's not taking it so well. 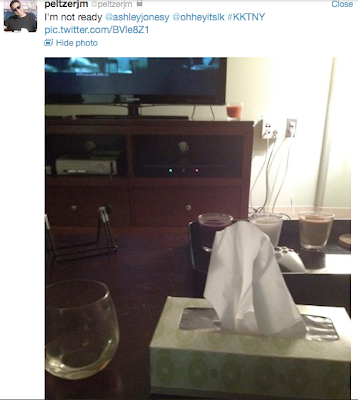 He really thought those two crazy kids were gonna make it.
Joe also wants to campaign for Kris to be the next Bachelor.
If that EVER happens I will never even turn my TV to ABC again.
Which is extremely unfortunate because that is a channel where a lot of my stories come on.
I feel so used.
I got wrapped up in this fairytale and now I'm just not myself anymore.
I think I'll go put on non-waterproof mascara and cry about it
until someone comes and checks on me.
Email Post
Labels: dumb gross kardashians troll