I've been roped into "The Bachelor"
I have gotten sucked in before and gotten really attached to the couples.
Ali and Roberto were my latest loves and look what happened.
Kaput.
So why I am putting myself through this for another season I don't know.
Ok, yes I do.
I love reality TV more than is healthy.
Here are my thoughts on the first episode:
Ben is awkward & I think I like it 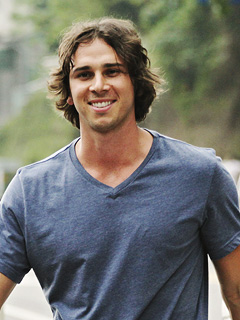 I feel like he was on camera for a total of about 15 mins the entire two hours as most the episode was focused on the banana sandwiches, aka his future girlfriends.
But he seems sweet.
Looking at pictures of him he has some weird hair choices but I'm willing to look past that.
We all make mistakes:

I'm interested to see how he goes throughout the season.
I'm hoping he doesn't keep a Vienna type girl a la Jake Pavelka.
However, I have a feeling that it will happen and I will rage accordingly.
I want to warn you that I haven't yet memorized the ladies names nor committed to their faces because I don't like getting attached and then watching them leave the first night.
It hurts too much...I'm fragile.


In subsequent posts I promise to do better, but for now here is my general overview of these harlots.
There doesn't seem to be just ONE bunny boiler this season.

There are several women that would fake a pregnancy to keep a guy, and that concerns me for precious Ben.


My first inkling of the crazy, was the reaction that the women gave when Chris Harrison brought in the "First Impression Rose"

The ladies acted like that flower was the ticket to getting them a baby unicorn.

Their shifty eyes and drool made me a little concerned for Ben's safety:

The next clue that many of these women would shank in old lady should they mention any attraction to their significant other, was when the women LOOKED LIKE THEY WERE GOING TO SHANK AN OLD LADY FOR SAYING SHE LIKED BEN.
To clarify one of the contestants brought her grandmother with her.
Smart move if you ask me.
She was adorable & the approach was handled well.
It could have gotten creepy quick, but I thought it was sincere and decided I liked her.

When the grandma and contestant entered the room full of other hopefuls,
you would have thought both of them came in threatening a knife fight.

Everyone was so preoccupied with the elderly coming in their window and snatching their mens up that no one was paying attention to the crazy hurricane, Jenna.
(She's the only contestant I do remember because her crazy was that monumental) 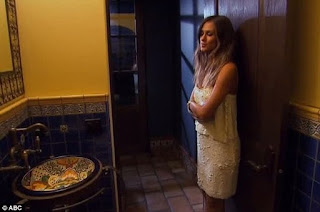 She spent most of the night crying in this bathroom...
Apparently one of the girls began to taunt Jenna making her question why someone didn't like her so early in the game.
Jenna did warn us that she did over analyze at the beginning of the episode.
So much so that she has a whole blog dedicated to it.
No but seriously, it's called theoveranalyst.net.
One doesn't need to over analyze that she can't hold her booze but she also doesn't know how to interact with..........anyone.
At one point she approached her bully and said,
"Maybe one day we could share a tampon."
My response:

She then awkwardly cornered Ben telling him how overwhelmed she was.
He kindly patted her on the hand.

If I had been him I would have said,
"YOU'RE OVERWHELMED!? DO YOU SEE ALL THESE WOMEN THROWING THEMSELVES AT ME? RIDING IN ON HORSES, BRINGING THEIR GRANNIES, WRITING ME WEIRD SONGS I HAVE TO PRETEND TO LIKE--AND HAVING TO REMEMBER ALL OF YOUR NAMES? GIRL I'M OVERWHELMED!"

But you know, we're different people Ben and I.

In the end that loony bin got a rose.
My theory is that she locks it up orrrrr she cuts a girls hair while she sleeps.
It could go either way.

The amount of catty comments and fighting that happened on the first night leads me to believe that this is going to be a solid season.

It also helped me see that Stef & I's New Year's Eve idea to make Bachelor audition videos wasn't a bad idea.
We'd be great candidates.
I want to apologize for the editing of Stef's video as I am no Speilberg.
However, I believe the message is still clear, she'd be a fantastic contestant:

I, on the other hand, probably need some polishing.
Why?
Because this is how I looked during filming: 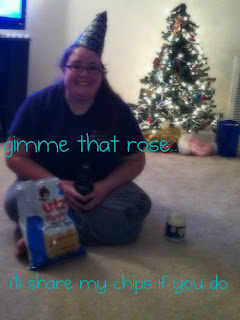 Here is my video clip:


Fingers crossed we get the call back!
Email Post