I will not dignify Ben's actions with a response...

Yes I will.
But first, let me apologize yet again for a late update.
Don't worry I've already been scolded: 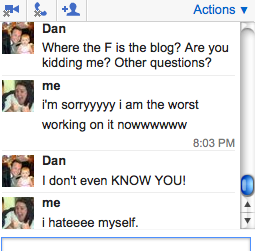 He runs a tight ship.
So here's the thing.
I can't wait for this season to be OVER.
Ben is a infuriating.
I've since coped with the fact that Kacie B. is no longer a contestant for his heart or for the next Bachelorette.
More on her later.

I took the loss of Kacie so well because
I had a new favorite.
Nikki.
Sure she mentioned that she was divorced 8-10 times like she was being sponsored by "The Broken Marriage Foundation"
But she was so nice.
She still pretended like riding in a helicopter was a treat.
She got excited about the fire place in the fantasy suite.
Just so lovely.
Until,
naturally Ben saw through her BULL CRAP and sent her home.
Nikki clearly was the bad apple in the bunch.
Sike.

He took Horzeface, rather Lindzi with a "z," on another date where they yet again faced her fear of heights (and commitment).
At this point if I was Horzeface I would be pissed.
TWO DATES where I'm up in the air, suspended?
It's becoming insensitive.
One date at or below sea level would be acceptable dude.

His date with Courtney was full of deep conversations.
Like yelling, "Hey Cow" to see if the bovines in the area responded.
Emotionally gripping stuff.

There was crazy eye twitch from her when Ben told her he had several girl friends, a mom, and sister and was concerned for how she would treat them.
My initial thought was: they're already dead.
But she played it off and solidified her spot to the final rose.

Of course all women took the invitation to the Fantasy Suite, or as I see it:

Dan kept a tally all night.

Much to many of my Bachelor buddies' surprise  there was a brand new banana sandwich. 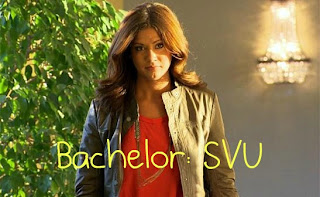 Good ole' Kacie was back to figure out what went wrong.
Ben was "shocked" to see her.
I say "shocked" because I struggle finding emotion in his robot features.
He told Kacie is was due to her family's wishes not matching up with his.
(Please read: I was definitely gonna get to the smush room with Courtney and I didn't get that DTF vibe from you.)

Kacie had a quick response:

It did not.
She was sent home again.
First she needed a moment to plot  rest...on the floor of the hallway in the hotel.
Because she's a lady. 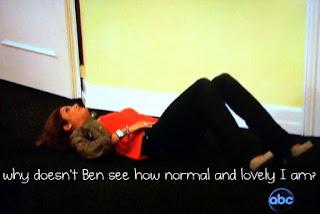 And then walked into the sunset.
I don't know if she was over eager or what but if she waited like ONE more week she could have saved her self the plane trip and waited until the "Women Tell All" special.

I'm ready for the next season.
This is getting old...
Courtney and Ben will be the next Vienna and Jake.
Chris will do a therapy session in a special 2 hour special where Ben addresses the new facial scar he got from "being careless and walking into Courtney's knife."

This has run its course.
I'm ready for babes in the boy sense of the word.
The final rose ceremony cannot come fast enough.
Email Post