So I know I've said this before, but I think I would be a great candidate for "The Bachelorette."
I say that mainly because I want to find love blah blah but also because they get to go to so many free concerts.

Emily has met Gloriana, Dolly Parton, and Luke Bryan and it's only been 3 weeks.
I swear to God if Garth Brooks is on an upcoming show I'm going to lose it.

This week Emily was all about sending people home & I dig it.
She had some pretty solid dates with Foxface (Chris) and Arie.

She and Foxface went on a typical first date:
Scaling a wall to eat at roof top restaurant.
Does anyone know if that is normal restaurant protocol?
If so that sounds awful. 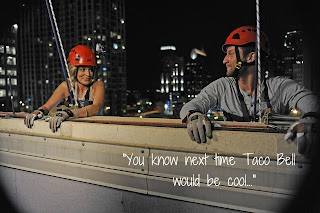 She also went on a precious date with Arie who is rapidly becoming a front runner.
He was a muffin and she really seems to like him.
He doesn't seem to have any sleaze type symptoms and I enjoy that.

The rest of the episode was pretty good.
The dudes' true colors started to show and Emily's friends were there to capitalize on all of the muscles. 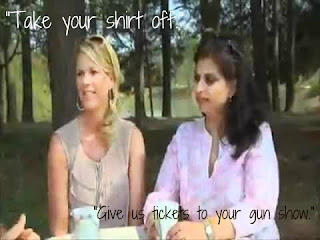 The group date was probably my favorite part of the whole night because of Emily's best friend Wendy.
She was a girl after my own heart.
She had guys taking off their shirts, making them do calisthenics, asking tough questions.
It was great.
Her favorite (and now my 2nd fav next to Charlie) was Sean.

She milked it for all it was worth. 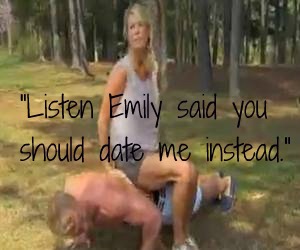 And I appreciated it.

Sean was adorable and sincere. I really like him a lot.
Jef with one F seemed to really like hanging out with the kids.
Doug insisted on remaining clothed.

Ryan has really started to creep me out.
Once a beautiful face with great potential he is now a creepy crawly possessive jerk.
He slithered up to Emily and her friends and tried hanging out with them instead of the other guys and kids.
Gag me.

For some reason Travis brought Shelly the Egg to the playground.
I was starting to believe that Shelly was a life size Tamigatchi the way he cared for it. 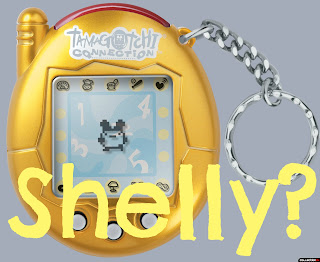 Emily's friends quickly let him know that it wasn't cute and that Shelly needed to go.
They later smashed it and sadly no baby T-Rex galloped out.
Not to be dramatic but my dreams were crushed.

Tony (Danny Tanner) spent the day crying about missing his son.
I kept letting him know via my television yelling that Kimmie Gibbler was probably keeping him entertained as per usual but he just kept crying and crying....and crying.

So Emily sent him packing.
I'm sure Uncle Jesse and Joey welcomed him with open arms when he got back to his San Francisco townhouse.

The rose ceremony was excellent.
Mainly because of Alessandro.
He told Emily that being a father would be a compromise for him.
But more importantly made it known that he was a gypsy that couldn't be tied down. 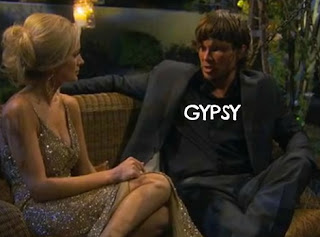 She promptly showed him the door.
At the end of the episode they showed him telling Emily's friends that he was a gypsy KING and that he at one point dated his cousin.
Don't worry guys...his THIRD cousin.

but I don't know if that's the kind of man for me.

Emily was shaken and Arie came to console her which was presh.
Then meat head Ryan started grunting and making unintelligible noises because he couldn't believe Emily kissed Arie and not him.

Spoiler alert dude: She kisses everyone. A lot.
I don't like him.

The previews show him really douching it up in the future and I can't wait.
This season is getting better and better.
Gypsies? Shirtless hunks doing push ups? Concerts?
More please.
Email Post