How Ricki Got Her Groove Back...

﻿I want you to know that I'm writing this post with sadness in my heart.
Why?
Because Emily did something unforgivable.

I'm not mad at her.
I'm just disappointed.
Which we all know is much, much worse.

This week they were in Bermuda.
Cue lots of "Love Triangle," lost at sea, lost in love metaphors.
Poetic stuff.

They showed Ricki in Bermuda with Emily romping around on this one hill for like 20 minutes.
While I was watching with my friend Ang I said,
"I really want Ricki to get her groove back on this trip. You know get a little hair wrap on the board walk. Maybe some full on braids with beads at the end. Perhaps take a long walk with Taye Diggs on the beach. She deserves it."

Why does my brain think of these things?
No idea.

Chris Harrison told the guys about the dreaded 2 on 1 date.
They were all panicking.
blah blah blah.
The first date went to Doug.
He gave the, "I'm just a man, standing in front of a girl," kind of speech.
I sat unamused.

The group date was a sailing disaster. 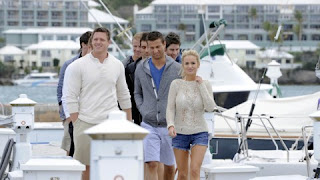 I had no idea what was happening at any given time.
The only thing I kept asking was, "WHERE'S CHARLIE? WHAT TEAM IS CHARLIE ON?"

The answer?
The losing team.
Which,spoiler alert, is foreshadowing for the rest of the episode. 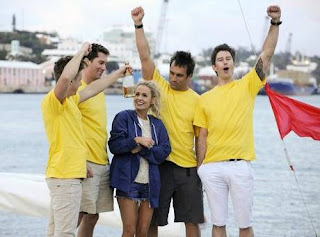 Ryan, Arie, Jef with one f, and Kalon won and got to go to the after party with her.

The other guys rode home like sad little pandas in a mini van back to the house.
Charlie was really upset and crying in the back of the van.
I'm going to brush over his man tears, because my love for him is so strong.
(To clarify I think it's fine for men to show their emotions, I just get extremely sweaty and uncomfortable when they do. It makes me nervous and I generally respond like so: )

I'm sensitive what can I say?

So they go on the date and Ryan starts talking in Mad Libs.
He calls Emily his potential trophy wife and then starts inserting key words, like
family, God, Ricki, marriage, feelings, love, starting to have feelings for, in odd spots that truly make know sense.

He's so sleazy and I hate him.

Then we are greeted with Arie and his preciousness.
However it is short lived because he goes in for the kiss this week ya'll and it is ROUGH CITY.
I don't know how I didn't see it last week but Jesus is he a bad kisser.
I know this because clearly I'm an expert. 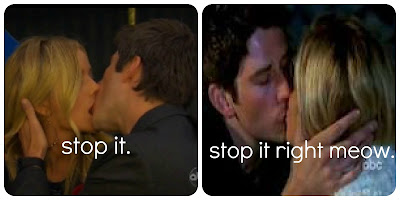 I would prefer it, if from here on out he keeps his mouth to himself.

They also kept using this weird blanket all night.
I don't know if Ricki made it during arts and crafts one week and they wanted to highlight her new etsy store but it was heinous. 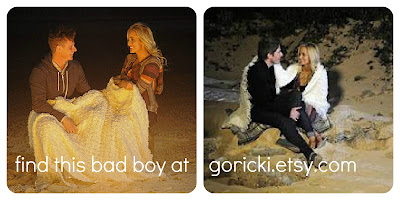 She gave the rose to Jef with one f.
Joe responded as such: 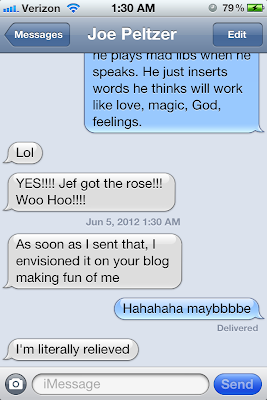 The two on one date was so awkward. 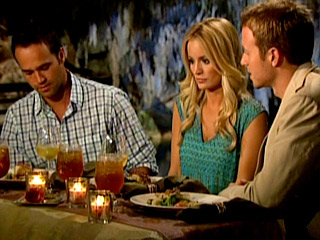 Emily in her personal hell.

Both men refused to eat (dealbreaker)
And Nate cried for literally no reason.
He said,
"I have a brother..." and then waterfalls of tears began to flow.
There was no tragic story to follow.
Just that he had a brother.
He was then promptly sent packing.
Joe said,
"At least he gets to see his brother."
Silver lining.

At the Rose Cermony Ryan admitted that he really likes Emily but if it didn't work out that would be OK because he's destined to be bigger and better.
Like the next Bachelor.
Read: HE'S THE WORST.

I was hoping he'd sit too close to a candle however, he remained unscathed the whole night.

Speaking of candles how much do you think they spend on tea lights alone?
Is there a Pier One Imports in Bermuda?
They make every episode look like a sancutary.
It's creepy yet also intriguing.
If you know their budget please do leave a comment.

This is when Emily betrayed me.
The final rose left Charlie, Alejandro, and Michael waiting.

Do you know who she gave that rose to?
ALEJANDRO.
THE MUSHROOM FARMER.

You don't know who he is?
Yeah me either because he hasn't gone on ANY EFFING MEMORABLE DATES.

So Charlie, what I'm saying is, "Call me."
Email Post