Guess who has to be on a plane at 7am tomorrow.
Me.
Guess who wants to make sure I talk about my feelings about the Bachelorette episode because I'm obsessed.
Also me.

Let me preface this by saying I was completely jeal-city that they were in Croatia this week.
Rage and envy were just seeping out of my pores.

The men were in the hotel room just chit chatting like girls do and Ryan was seen wearing what I can only describe as a halter tank from Forever 21: 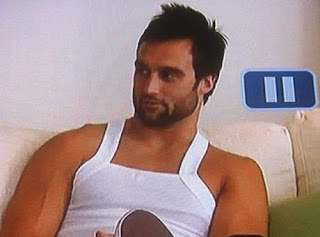 Or perhaps it was a tasteful top to a full coverage tankini.
All I know is that it should have never seen the light of day.

Travis got the first date and it was clear he was going to remain in the Friend Zone.
Naturally it was raining when he didn't get the rose.
As he was walking out he threw his umbrella to the ground.
Extremely dramatic.
Emily did not want to stand under his umbrella -ella -ella you know?
He mustn't take it so personally.

The group date was Jef(f), Doug, Sean <3, Foxface, & Wolf.
They went to see the movie "Brave" because that made sense.
After Emily let the guys know they were going to be participating in their own version of the movie's "Highland Games."

What I heard was "Hunger Games."
As you know I'm a mega fan of the series.
My worlds collided tonight folks.
Bachelorette Hunger Games began and I was so excited.
I was clearly rooting for Sean as he is my favorite.
And when I say favorite I mean I'm borderline obsessed.

My friend Ang gave him good advice going into the competition:

I too had some tips:

Archery was the first task. 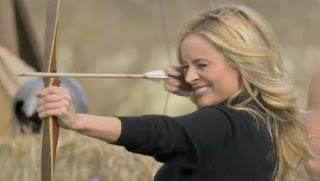 The guys were impressed.
Blah blah.

Then the boys started their thing.

Please peep the gun show that Sean starred in: 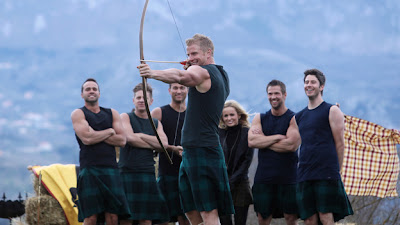 I need a minute.

The saddest display of skill came from Foxface.
He would have died so quick in the HGs.
Like quicker than me and that's saying something.

Exhibit A why he was the pits:

What was not the pits:
The guys' reactions:

He really sucked in every event but Emily gave him the "cup" because he was brave to compete and follow thru.
Please read:

She ended up giving him the date rose as well.
Such a bummer as Sean should have TOTALLY gotten it.

The next one on one date was with Ryan.
He is the biggest tool on Earth.
Ever since he said that he was "OK" with the fact that he might not end up with Emily because he would love to be the next Bachelor, I hated him.
He's charming for a little bit and then you realize he'd hit on your younger sister if you left him unsupervised.
Ick central.

Emily FINALLLLLY wised up and didn't give him a rose on the date.
Suck it turd.

He wouldn't really take no for an answer and I was sure she was going to cave.
I mean the man grows a memorizing beard. 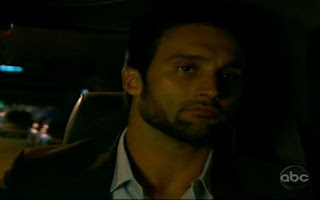 I was preparing to rage against the machine on how dumb Emily was to back down but she stayed strong and sent him packing.
So was my pal Carlyle:

When the guys saw his luggage being taken out of the room they held an R. Kelly type hotel party.
Arie took the opportunity to sneak out and tell Emily how proud he was of her for making the right choice.
I know that a lot of people are swooning over Arie but I don't like him at all.
He's sleazy and cheesy and I'm not a fan.
Emily gave him Ryan's rose while they talked on her bed.
I wasn't sure if that was an official invitation or not so I asked the authority:

He has yet to respond.

She ended up having heart to hearts with Wolf and Doug at the Rose Ceremony.
Wolf pulled the dead relative card in the nick of time.
Doug cried.
Lots of man tears were being shed.
It was a little too much for me.

Emily went outside to find Chris who was apparently smoking cigs with the other producers on the side of the house.
He acted real inconvenienced that he had to forgo his evening plans and actually say more than, 'This is the final rose."

It turns out instead of sending Doug & Wolf home like I was hoping she gave them both roses to get to know them better.
I audibly groaned.
I was really hoping they were going home.

I just want her to marry Sean on TV.
Forget these other scrubssssss.

Next week seems fantastic as Arie is outed for dating a producer/ Emily's bestie in the past and hiding it from her.
I can't wait.
I'll still be in California next week so my blog will be delayed and not as current but because I'm crazy and need a routine, I'm still gonna post it.

Hope everyone has a good week and may the odds be ever in your favor.
(I couldn't resist....HUNGER GAMES BACHELORETTE REALLY HAPPENED!)
Email Post