This week the Bachelorette was in London.
I, am currently in the amazon of Virginia, otherwise known as my room.

Seriously.
It's like the rain forest in here.
My roommates are skimping on the AC this week.
A sloth is literally hanging from my ceiling.

Naturally Chris Harrison showed up stating the obvious that they were all in London.
He then flicked them all off and sauntered off to the nearest bar and drank his face off.

The first date this week was with my new boo Sean.
Let me tell you what:
This kid is a straight up ninny muffin.
And can be found on Twitter @seanlowe09
(thank you Alyssa)

He and Emily went on a date seeing all the sites of London.
They even recreated the "Royal Kiss" just like Kate and William in front of the balcony.
Normally I would say something snarky about how lameo that was. 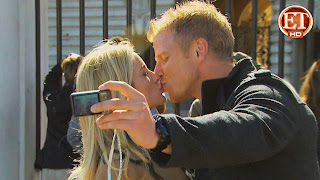 However, I realized that Sean could kiss me in front of a sewage plant and I would be OK with it.
He's adorable.

I know before I've said that I would be a great candidate to be the Bachelorette but it was during Emily and Sean's date that I realized I may not be.

A man in a top hat and crazy outfit sat them down for dinner.
Emily did not once ask to wear the hat or engage the man in any sort of banter regarding his get up.
I would have gone on for at least 5 minutes, and ended up with a picture in the hat with two thumbs up.
Because I'm polite and a lady.

She ended up giving Sean a rose and I'm 100% on his team.
The group date was horrendous as per usual.
She took the dudes to act out a Shakespeare play.
Arie started freaking out that he had to act AND dress as woman.
It was a lot for him to process.
My friend Jill tweeted that Arie really looked like Belle dressed as a woman. 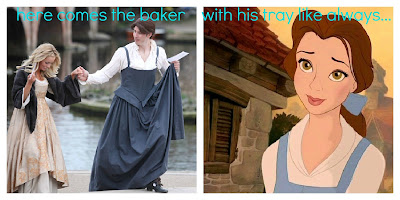 And I couldn't agree more.
Kalon started taking his role as Romeo very seriously.
I was starting to wonder if he was actually auditioning for the Actors Studio.
He ended up being pretttttttty terrible.
Ryan on the other hand impressed me by sounding out several words.
However, he is still THE PITS.
During the group date he got tangled in the curtains that led to a private room and then gave
Emily a hideous turquoise necklace.
He also told her how surprised he was that the word turquoise had the letter "q" in it.
That is a lie.
He's just really dumb and can't stand that Emily finds him appealing in any way.
Kalon continuously thru the episode kept referring to Ricki as baggage.
I don't know if you knew this about Emily but she has a daughter named Ricki.
Whom she loves very much.

I know, I too was shocked.
She doesn't talk about her much.
J/K.
Emily found out via Doug and cursed Kalon out.
She kept saying that she wanted to go West Virginia hood rat on him and kick his ass.
She said it just about as many times as she brings up Ricki.
So give or take: 400 mentions.
I know that West Virginia is known mostly for their hood rat tendencies, but Emily really needed to stop flaunting it.
We get it girl your from the mean streets of West VA that boast Brad Paisley and Hillbilly Hot Dogs: 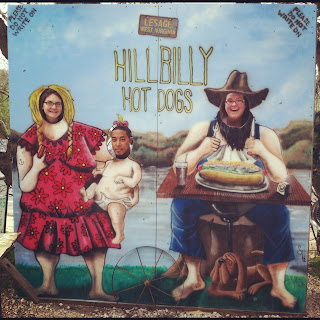 She immediately sent Kalon home.
Which I'm sure he was fine with.
He had been kept from his #1 passion for too long:
Murder.
He was a creepy dude, amIright?
What really surprised me was that a lot of the guys weren't really keen on telling Emily about his comments in the first place.
Why WOULDN'T they say something?
Clearly that would be one less person around.
And he sucked.
While this whole fiasco was going on Joe posed a very good question:

Which got Jill, Joe, and I thinking.
We came up with the following games the guys were probably playing while waiting for their friends to come home from their date with their mutual girlfriend:
After we finished giggling at how hilarious we are, we were then treated with the one on one date between Jef with one F and Emily.

Side note: A reader profoundly pointed this out last week:

And they are totally right. But I can't stop.
The date was pretty cute.
Except for one thing.
Jill pointed out something that has been bothering me for awhile now:

WHY DON'T THESE JERKS EAT THEIR FOOD?
DON'T THEY KNOW THERE ARE STARVING PEOPLE IN ANNANDALE THAT WOULD LOVE TO EAT THAT DELISH MORSEL OF PUDDING AND COOKIE IN A FANCY CUP?
F.
After I was done salivating over their dessert, Emily gave Jef(F) the rose and they kissed for the first time ever.
I approve.
The rest of the episode was pretty lackluster.
I'm not a huge fan of Arie what with his fish kissing, but he also only stares at Emily's lips and it's starting to make me incredibly uncomfy.
He's sleazy in a different way than Ryan although I can't quit figure out how yet.
She ended up sending Alejandro home.
I was shocked 0%.
However he really did seem like a FUN-GI.
Get it?
Because he was a mushroom farmer.
Fun guy.
Just me?
Next week the group is heading to the #1 Spring Break destination in the world.
That's right:
CROATIAAAAAA!
Yep you read that right.
Croatia.
Hopefully Emily will be over that cold she had this week.
I mean she clearly powered thru and kissed Jef, Sean, Arie, and Ryan.
Fingers crossed she was on antibiotics otherwise there is going to be a lot of post nasal drip going on in the big C to the R to the O to the A....you get the point.
Croatia.
Email Post