First I would like to start by saying that I'm aware that I'm going to rage about a woman who I have never met and her dating life.

I'm ashamed of myself for being attached.
Really ashamed.
I should have known better.

It was the top 3 this week.
I was sure she was going to send Arie home.
Spoiler alert: She didn't.
We'll get to that later.

Writing about her date with Sean literally hurts my brain.
He took a little long to say, "I love you."
That was literally the only stupid part of the date.
BECAUSE THE REST WAS EFFING PERFECT.
HE WROTE RICKI A NOTE ABOUT HOW PUMPED HE WAS TO BE IN HER LIFE.
IT WAS ADORABLE DAMMIT.

Emily invited him to the Fantasy Suite (FS).
I always giggle when they go to the FS because in my head I'm like "they're gonna do it."
Because I'm mature.
However, Emily turned the tables this year and said she had to be a role model for her daughter.
Which let everyone know that she was a mom.
Which was shocking to me, as I had no clue.
She told Sean that she couldn't stay the night but they made out in the hot tub so I called it a success.

Her second date was with Jef(f).
It was so adorable.
I think his head is full of unicorns and rainbows and butterflies.
When he talks about Emily he uses cheesy metaphors and similes but it seems really genuine.
What I also like about him is that he asks her questions.
He's not like selling himself all the time, he wants to know if they're going to be a good match and I dig that.

Then it came time for her to offer a trip to the Fantasy Suite (FS).
He actually turned her down, saying that he didn't think it was right and that he wanted to set a good example for Ricki.
So that was adorable.
He DID look a little scared about actually going into the FS.
I wanted to reassure him that it was going to be ok:

But they were respectful and cute.
Blah blah blah.

I just found it a little disappointing that last year the girls were dropping their bikini bottoms at the door when the goofy haired dummy gave them the card to the suite but these guys were layering more clothes on.
I felt sad about it.

Arie's date was last.
Because he sucks.
To be honest I didn't really care about him at all.
I was hoping that dolphin was trained to kill.
It was not.
I felt sad about that too.
Perhaps it's because that fish face lives among the dolphins and they count him as a friend.
I don't know.
I hate him.

The rest of their date was them making out and her talking about how much she likes making out with him.
He then enlightened her with his daily schedule.
He wakes up and 930 and then effs around all day.
So he's gonna be great with newborns.
She didn't even offer him an invitation to go inside of a hotel room because she couldn't keep her hands off of him.
#Gross.

I found this picture the other day and it accurately depicts how I feel about their kissing: 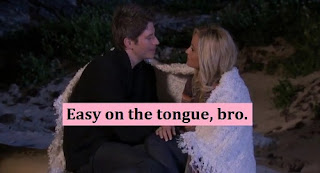 She then talked to Chris Harrison about how sad she was that she had to dump someone.
It was like she was all of a sudden realizing what the show was all about.
She was also talking about the whole experience like she had a great time at a summer camp.
My twitter friend Allie immediately agreed:

They showed the videos of the guys talking to Emily and of course Sean was first.

I love you too buddy.

He was amazing and perfect and I love him.

Jef(f) was next and was sweet and cute.

Arie was next and essiently was like "kissing you is cool, whatever bro."

She gave the first rose to Jef(f).
I screamed.

Then she gave the second rose to ARIE.
Here's where I rage:

LAST SEASON BEN PICKED THE ONE HE WAS MOST PHYSICALLY ATTRACTED TO.
SHE WAS PURE EVIL.
THIS SEASON EMILY IS LEADING WITH HER OVARIES AND NOT HER HEART AND DUMPED A WONDERFUL GUY WHO HAD HER DAUGHTER IN THE FOREFRONT OF ALL OF HIS THOUGHTS AND INTENTIONS.
IF YOU WANT TO FIND SOMEONE TO MAKE OUT WITH AND BONE GO ON "THE REAL WORLD."
SEAN IS A LOVE MUFFIN AND PRECIOUS AND SURE MAYBE HE DOESN'T HAVE THE MOST PROMINENT EYEBROWS EVER BUT HE'S MOSTLY AN ANGEL SENT FROM THE LAND OF WHERE BEAUTIFUL PEOPLE ARE MADE.

ARIE IS A LOSER.
WITH A CREEPY GYPSY MOM AND WEIRDO TWIN BROTHERS.
I HOPE YOU ENJOY LIVING YOUR LIFE IN THE SEA.
EVERY TIME HE KISSES YOU HES SUCKING THE LIFE OUT OF YOU SO HE CAN STAY ON LAND A LITTLE LONGER.
WHYYYYYYYY EMILY?

Sean took the break up like a champ.
He also said that when he saw Emily that night, he knew he was looking at his wife.
Jill summed it up best: 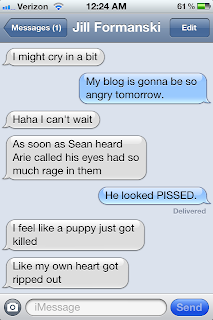 He didn't cry.
He didn't get angry at her (even though he looked super bummed).
He didn't punch the guys.
He just looked so hurt.
It killed me.

I just feel so sad for him.
And feel extremely crazy for saying that.

I still like Emily and really hope she picks Jef(f).
The previews for the finale look pretty good.
She seems pretty upset and unsure of what to do so I'm hoping she brings back Sean.
I can't let him go.
I miss him already.
I'm sick.

If she picks Arie just because he's "stupid hot" I will literally hulk out of my house.