First I want to start by saying "Hi!" to all the new readers.
All of your comments about how you like this silly thing are so great and you don't know how much they make my day.
But seriously I read them to my best friend.
Y'all are the besttttttttttttttttt.

Now on to this week's "Bachelorette."

I would like to share where I watched the episode.
As of this past Friday I now live in Philadelphia!
I'm really excited to be here and very excited about my new job.
It's also awesome because I'm super close to my two favorite Bachelorette watching buddies Joe and Jill.
When I sat down to watch with Jill in my new apartment it was brought to my attention that ABC is completely snowy and staticky...basically unwatchable.
I panicked.
Then I realized I had access to Joe's apartment so we broke in and watched it on his couch while he was still at work.
That's not creepy right?

Normally I don't watch the reunion shows because it's just a lot of yelly women and dudes.
However, because I am so creepily invested in this season- I did.
There wasn't too much that happened but I did notice a few things.

Here is my hodge podge of ideas in no particular organized manner:


Starting with Chris Harrison.
Jill mentioned that she thinks that she could date him.
I, on the other hand, think the dates would go like this:
Chris: "Hello Ashley. Welcome to our date."
Then he would disappear while I ate.
When I was done he'd come back in and say,
"Ashley this concludes our date."
After which he would open my car door for me and send me home.
As long as he paid for dinner...I think I could be OK with it.

They talked to Foxface.
He has rage issues.
He seems like a fartface on "Bachelor Pad."
I might get sucked in to that too.
Are other people going to watch?
I've never seen it.
Is it worth it?
Please advise.

I noticed that when the guys were talking about Emily they kept referring to her as "that girl" or "this girl." I don't really get that but hey whatever.

Did anyone else notice how there were guys on stage that literally were never talked to?
I saw 2 separate guys who I have never seen in my life.
I don't have time for imposters.

When they talked to Kalon, everyone booed and it made me giggle so hard.
Then when Emily came out and ripped him a new one, I clapped.
She may have broken my heart and Sean's but she is a stand up lady.
Good for her.
Kalon also looked so pissed that he got yelled at by a woman on TV. 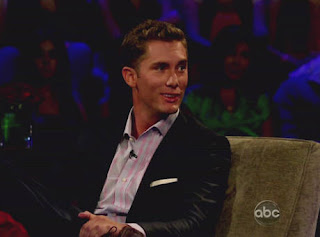 So he's probably going to start a killing spree soon.
Coming to an episode of "Criminal Minds" near you, ex-reality dating contestant goes on rampage to avenge his unused helicopter.
I'd watch it.

Also does Ryan look 1. Darker and 2. Fatter and Older? 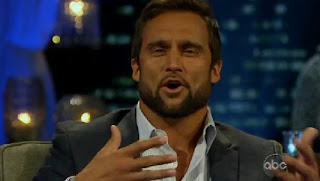 He's a dummy.
Like super stupid but dammit can he grow a beard.
I really enjoyed how Chris Harrison assured everyone that he would not be the next Bachelor.
In yo face sucka.

When they talked to Sean I'm fairly certain that not only my heart but the hearts of 1,000 tiny angels also broke when he talked about how he loved Emily but respected her and her decision.
He also mentioned that he was ready for love, which is weird becausssssssse, so am I.

I know next week is going to be a doozy.
I have heard/read some things and I don't know what to believe.
I don't know who I can trust.
I'm emotional about it.

I did think it was super precious when Jef(f) in the preview for the finale said he could hold Emily's hand till they were 110.
Did I tear up?
Maybe.
Should you judge me for it?
Absolutely.

I can't wait for SUNDAY!
If you feel like it tweet me during it.
I'll be glued to Twitter and ABC for 3 hours.
You can find me @ashleyjonesy

I apologize in advance if Arie wins.
Because I will be using foul language.
And maybe uploading a picture of my middle finger.
Don't say I didn't warn you.
Email Post
Labels: abc bachelorette emily maynard