I read a lot of blogs about fitness.
I read them because it makes me feel like I've done a work out.
I usually read while eating.
Some magazines call that "fueling your body."
Others would call that being a troll on your couch.
I say, "Shut up and get out of my life."

However, I've come to the conclusion that although knowledge is power, me reading isn't really helping get rid of these lunch lady arms. 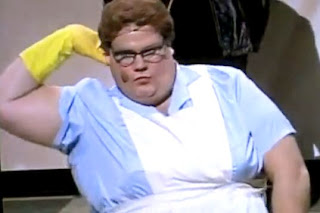 Last week I blogged about going to kick boxing for the first time.
And thank you all for the suggestions about the double bra, and the encouragement to keep going.
It seriously made my week.

I went back this week.
I got better.
Marginally, but still better.
So we'll call it a win.
I'm still off on all the counts and don't really understand what's happening until it's almost over.
I'm going to give it ONE more shot before we break up and I start seeing other cardio type classes.
Like that seductive mistress that is Zumba.

I wanted to try my hand at another group fitness class.
My friend Colleen at the Lunchbox Diaries has mentioned
how much she loves Body Pump.
Colleen is cool so I thought that I would try it.

Body Pump is essentially a weights based class.
It tones you and works all your muscles.
All of them.
Like ones you didn't know you had.
(Editor's note: I had to look up what the exact purpose of Body Pump was because I would have just said, "Lift heavy things and stuff and sweat and terrible.")

I knew the class was going to be challenging.
I knew it.
That didn't make it any easier.
The instructor was one of those girls who's like super pretty and can wear head bands that don't fling off her head the minute she turns it.
(Is that just a problem I have because seriously...those bad boys are like impossible to keep on.
Maybe it's because my brain is so full of knowledge. That's totally it.)

I was immediately intimidated by her.
She told us to go get our weights which my friend MacKenzie was kind enough to help me with.

You have to grab a bar, and a total of 6 weights.
You also have to get a bench.
I'm not lying to you when I say that women were assembling their weight stations like they were a freaking Nascar Pit Crew.
Meanwhile I'm in my spot, all:

The class was starting.

People were beginning to exercise and I was still putting it all together:
A live action shot of me can be found below:

When I was finally ready the first set was almost over.
The second set involved us taking the weights BACK OFF.
Yeah, that's right, the ones we JUST put on.
So it was back to me fumbling around on the ground while other people were lifting double their chest weight.
Do you not know what that means?
Me either.
Any time she would specify the weight we needed I would sigh heavily and wipe the tears sweat from my eyes.

The worst part was when we had to do a dip that worked our triceps.
You basically hang your butt over the edge of your bench and push up and down.
I froze.
Literally froze.
The instructor looked me dead in the eyes and said to "the group"
"YOU DON'T KNOW HOW STRONG YOU ARE. PUSH THRU IT."
I wanted to yell,
"YOU DON'T KNOW MY LIFE. I CAN'T RAISE THIS BABY, (ME BEING THE FIGURATIVE BABY) ON MY OWN."
But I just envisioned me kicking the weights out of her hand a la Alan instead:

I didn't even know where to begin.
I was convinced that if I tried it I would make a complete fool of myself.
So I just sat there.
Staring at the instructor as she preached about pushing limits.
It was kind of a bummer.
I didn't even try.


As the class went on I was kind of frustrated at myself for my lack of coolness.
In kickboxing I could at least make people around me giggle by doing my own little choreography.
In Body Pump there's no place to hide when you drop a weight on the ground.
And it's really hard to storm out in a huff when you have so much effing equipment to put away.

I was convinced that I was never coming back.
When I realized I totally gave up on myself, I became determined to make it work.
So I'm gonna go back to Body Pump.
And I'm going to keep going until I can do one tricep dip.
Yeah, one.
Let's not get crazy.

Colleen told me after about the 3rd time you start to get the hang of it and gave me some tips for future classes.
So I'm trusting her.
But so help me if it doesn't improve, I'm reporting her blog as spam.