I'm trying to fill the void


﻿In my attempts to find something to fill the void created by "The Bachelorette" I have taken up watching the Olympics.

Did I love watching archery?
Yup.
Did I think how pissed they must be because the only reason girls like me are into archery is because of a book written for teenagers?
Sure did.

But I have become mildly obsessed with swimming and gymnastics.
But for very different reasons.

It is no surprise why I love swimming.
The dude swimmers are top notch facially. 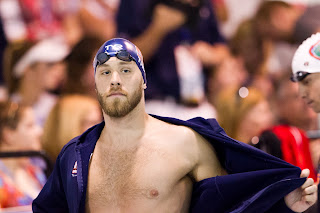 Tasteful side boob is lost on him, he goes for full frontal Spring Break flashing.

Hi bud.
You single?
Me too.
Let's make this thing official.
Sure your name has a lisp attached to it but guess what?
I don't hate it. 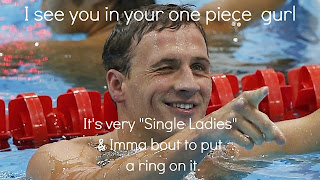 And none for Michael Phelps.
Woof.
(I mean clearly he got like eleventy medals or something but his face is not pleasing to my eyeballs.)

But I'm obsessed with gymnastics for another reason.
The commentators.
These people are grade A fartfaces.
They make the RUDEST comments ever about these athletes.
I can barely push myself up and out of a pool.
And watching me try to balance as a walk along a curb is embarrassing not to mention strenuous.
So the fact that these gymnasts are throwing themselves into the air while wearing singlets, leotards, scrunchies, and stirrup pants is nothing to shake your fist at.
Except that is all the commentators do.

When anyone steps out of bounds you would think they were stepping into actual lava as opposed to a different color of a large living room rug.
One gymnast lost their footing and ended up ruining their performance.
A commentator said,
"His team is telling him it's OK. But it is NOT Ok. Not at all."

I could be wrong but the dude fell off a short balance beam with handles.
He did not knife a judge.

Every misstep and every wobbly landing was cause for a loud yelly former gymnast to point out how many deductions that would be and how much shame they had brought to their country.
Because of their extreme reactions  I feel that is safe to assume that for every bad cart wheel, a puppy is then punched.

At first I was a little annoyed with the constant negativity but then I started participating and it made it kind of fun.
I've started using it in my daily interactions.

Someone trips?
OUT OF BOUNDS.

Throw something in the trashcan and it misses?
You hate to see that but: OUT OF BOUNDS.

You drop a piece of food?
Out of your mouth, and also OUT OF BOUNDS.

Try it.
Makes the day go a little quicker.
Thank me later.

P.S. I don't know if anyone noticed but I'm now officially www.ashleyjonesy.com!
Hooray!
Tell your friends.
Please.
And, of course, thank you!
Email Post
Labels: Olympics