Last week I said that I was giving kickboxing one more try before I broke up with it.
I lied.
The thought of going back to kickboxing literally made me want to die.
Mainly because halfway thru the class I knew I'd end up kicking things like this:

I tried convincing Jill to go but she wasn't having it: 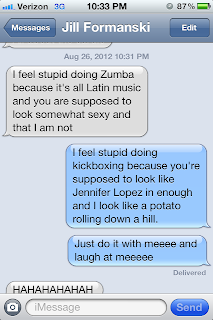 I'm not saying I'll never go back to kickboxing.
I am saying that I would have to be in a "Karate Kid" scenario for me to ever return.
And if I'm in that kind of situation I should really be evaluating my life choices and why I'm being bullied by rich high school kids.

I digress.
Although my relationship with kickboxing was about as long as John Mayer and Katy Perry's (boom roasted) I refused to give up on group fitness.

I've always wanted to try Zumba.
1. Because it's fun to say.
2. Because I envisioned myself dancing like Jennifer Lopez for an hour.
Read: A dream come true.

So I ventured over to the gym with Gabby after work.
Zumba was scheduled right after kickboxing so it was a little awkward seeing the instructor there.
I was all like "it's not you it's me" and she was all "whatever I know you've been texting about Zumba." and then I was like, "YOU DON'T KNOW MY LIFE."

It was emotional.
I really went all the way with that joke.
If you're still reading: I'm sorry.

When my new teacher walked in I thought that there must have been some mistake.
She was a little over 15 years old and looked like Taylor Swift.
Naturally I began to freak out.
I thought that old ladies taught Zumba and we danced with our hands in the a-yer like we just didn't care.
The class began with her starting the music and pointing to the right.
This meant we needed to get to dancing.

I am not lying to you when I say that the minute this chick started moving her hair was blowing in the breeze like she was standing in front of a fan.
Actual footage can be seen below:

At first I was so frustrated.
She was dancing like it was no big thing.
If I was on an episode of "Dance Moms" she would be at the top of the pyramid and I would have most definitely been on the bottom.

The whole time I was dancing I could just hear Abby Lee yelling at me.
So naturally I made up what the dialogue would have been:

"No Abby! I'm trying. I'm just a little light headed....from the spinning and salsa twirls. But do you have any booze because this is starting to feel like a club, and a marg would be kind of awesome."

"To be honest Abby I don't really think that's fair...I'm new at this and I'm doing my best. I could really use your support."

"Ok, but see Abby that's exactly what I'm trying to do here and you're just yelling at me. It's hurting my feelings, and what I'm hearing you say is that I'm not good enough."

I snapped out of my daydream when I heard the sweet sounds of one of the best songs on Earth.
Perhaps you've heard of it.
A little tune called, "SPICE UP YOUR LIFE."
That's right.
This girl was playing the mother effing SPICE GIRLS Y'ALL!

Yeah you know the ones that inspired me to wipe the buffalo sauce off my face and get to the gym.
I looked at Gabby, and literally yelled,
"OH MY GOD IT'S HAPPENING!"

We did the choreography.
The exact choreography.
I slammed it to the left, because I was having a good time.
I shook it the right because I knew that it felt fine.
And then I shook it to the front and went around.
I have never been happier in my life.
I felt like a Spice Girl.
Fluffy Spice if you will.

The next song was the Pussycat Dolls, followed by Beyonce, then by Britney.
It started feeling less and less like a work out class and more and more like I was auditioning for Diddy's "Making the Band."

In my head I looked awesome.
My JLO dreams were coming true.
Then I looked at myself in the mirror and realized I didn't look like JLO at all.
I looked like Amy Poehler in "Mean Girls."

I should have been embarassed, but I wasn't.
I loved Zumba.
And I'm going back.
I WIN THIS TIME GROUP FITNESS.

Now if you'll excuse me I'm going to go find myself an agent to start booking me on dancing gigs.
I'll probably be in a theater near you in "Step Up to the Streets Again...because we ran out of other places to step up to..."

I have the worst jokes.