Yesterday was Halloween.
Today is November 1st.
And I'm going to write about the scariest movie known to man.
Because I'm timely & topical.

When you ask someone what the scariest movie they've ever seen is I'm assuming you hear the following responses:

While all of those are scary and have me watching through my fings, none of the scare me as much as:

To that I say,
"Shut your mouth jerk and listen to all the reasons why it's the scariest movie known to human kind."

While getting trapped in some board games may be a blast, i.e. Candy Land, getting caught in the jungle for 25 years sounds terrifying.
Sure, getting trapped in a land full of candy will give you type II diabetes, but you wouldn't have this guy hunting you. 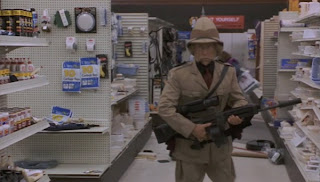 Looking at his pictures makes me sweat.
He wasn't even like "haha silly safari guy hunting you," creepy.
He was like "HOLY CRAP HE'S A HUMAN ROBOT PROGRAMMED TO KILL...RUN FASTER BONNIE HUNT" horrifying
He was hunting a human y'all.
A HUMAN.

Moving along.
You know what else is scary, getting trapped in a floor:

AND TURNING INTO A MONKEY.
You think a splinter in your finger hurts?
How bout a billion splinters IN YOUR FACE?

And you hate waxing your eyebrows?
HOW ABOUT WAXING YOUR ARMS FOR THE REST OF YOUR LIFE BECAUSE NOW YOU'RE AN APE.

You can't come back from that people.
I can barely get a date now.
Can you imagine if I started playing and had to wait for the game to be over for the curse to be reversed?
Bonnie Hunt left Robin Williams in the jungle for YEARS.
YEARS.

PLUS:
I don't trust my friends enough to last thru a whole game.
And I know the minute I rolled the "jungle card" they'd run to Wawa for a sandwich, and then to Target, and then forget that Jones is chilling in a tree top trying not to get straight up ate by a boa constrictor.
Another reason why Jumanji is terrifying: 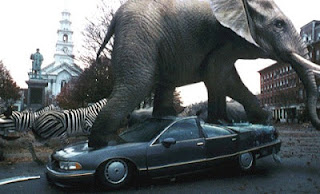 Animals on the loose.
Can you imagine the insurance claims?

The fact is you never know what's coming out of that board.
If you can't trust the people you're with you're screwed.
Cops don't believe you.
Monkeys drive cars.
Unpredictable hair growth.
Kristen Dunst is your sister.

Are you convinced?
I think I made my point thru my excessive CAPS & facts.

Jumanji is terrifying.
And if any of you try to buy me the actual board game for my birthday (November 26th) I will promptly bury it in the woods like the pilgrims did in the beginning of the movie.

And that's saying a lot.
Because I'm an only child...that really likes gifts.
Email Post
Labels: jumanji timely and topical