I would like to start by apologizing in advance.
This week I got very "Flavor of Love" contestant when Sean made some decisions.
I'm embarrassed but I would like to say that my reactions come from a place of weird love.

This week Sean took a break from working out.
Perhaps he pulled a hammy?
But we were treated to him strollin' around his house in his boxer briefs.
The internet, being the good best friend that it is, provided me with this little treasure:

The first date was with Selma.
I like her...I think.
He picked her up for a date, and I was kind of wondering if they were running from the law, with the amount of times they changed their modes of transportation.
He picked her up in a car...
Then took a plane...
Then a jeep...
Then they walked....
Next I was convinced they were going to take a tug boat somewhere to continue their sojourn away from what I can only conclude was Liam Neeson in "Taken 3."

Selma kept asking where they were going and Sean kept avoiding the question.
Then Selma said something that almost made my wig fall off.
And I quote, "What are you going to do with all 110 lbs of me?"

You know who knows my current weight lady?
Me.
And my doctor.
And I'm thinking about investing in a mind eraser so even he doesn't know.
I've heard of name dropping in a conversation...but WEIGHT DROPPING?
Come on man.

Turns out they were going rock climbing in the desert.
Selma claimed she felt, "Puffy."
I'm sure she was feeling a real hefty 112-113 lbs.

Sean told her that they were going up a 100 ft rock.
And Selma scaled that damn thing like it was what she normally does on her lunch break.
And to be clear this girl's butt was literally inches from Sean's face the entire time.

I have stated numerous times, (literally too many) how afraid I am of farting in public during a yoga class.
Add rock climbing with your boyfriend to the list.
Jesus.

Later Sean took her to a trailer park where they sat and talked.
They kept saying that the date was perfect but they didn't go to a Chipotle so I was kind of confused as to how they could make such a grandiose statement. 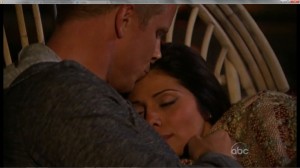 Selma told him that she wouldn't be able to kiss Sean because her mom would flip out due to her culture.
(via)

It was all very cute and I wanted to barf because I was falling for it.

For the record, my mom, Barb Jones, would pay Sean Lowe several American dollars and a few Sacajawea coins to kiss me on National Television.

At this point she'd pay Terry Bradshaw to kiss me on National Television. 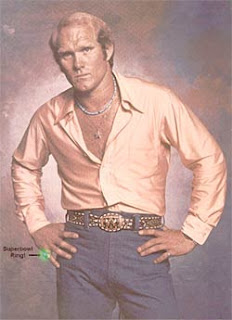 I get it Mom...you want grandchildren.

The next date was a group date at a roller derby rink.
Tierra, Amanda, other girls, and One-Armed Sarah were all in attendance.
I want to preface these next comments by saying I promise I'm not an evil person.
However, Sarah...we get it.
You have one arm.
Not leprosy.

Sarah started panicking because she didn't have balance on her skates.
You know due to the one arm thing.
Every time she would fall she would say she was embarrassed for not getting up quick enough.
Well girlfriend, let me give you a reinactment of what it looks like when I try to get up from the ground:

And to confirm: I have two arms.

Her sob story was the damn zip lining debacle all over again.
My partner in crime Ashley had a pretty solid point:

Again, I'm not trying to say that Sarah struggle isn't real...but we get it.
One arm.


In the meantime Tierra Light- otherwise known as Amanda- had convinced everyone that she was on a roller derby team.
So naturally it was kind of hilarious that she was the one to take the tumble.
The girls thought she cracked her jaw.
And as she drove away to the hospital for X-rays, Tierra began to plot.

Later in the evening the pack of women were sitting on a roof top deck chatting.

Apparently "getting ignored" and "tortured" by the other women was too much for Tierra.
Which led her to be "fusstrated."
I can only assume that is similar to being FRUSTRATED.
She stormed off and demanded that she was going to leave, then crouched in a dark hallway and waited for Sean to emerge.
When he did, she started crying. 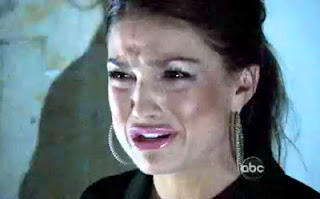 Life is hard y'all.
Tierra has been waiting to give her underwear  heart to someone for a long time.
And being in this environment is very trying on her...even though she thinks that Sean is such a great guy.

This is when I had a black out rage attack.
Sean said, "Wait right here..." and left.
To which I exclaimed in my apartment alone, "DON'T YOU GIVE HER THAT EFFING ROSE SEAN."
He didn't listen.

HE FELL FOR HER TRICKS.
DID COURTNEY ROBINSON AND VIENNA SAUSAGE TEACH HIM NOTHING?
WHAT IS WRONGGGGGGG WITH HIM?

She is the pits.

The last date of the evening went to Leslie, or as I like to call her the girl with 1,000 teeth: 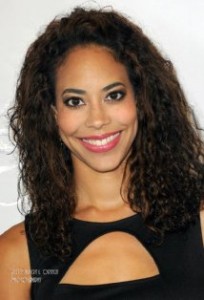 The date card came with a pair of diamond earrings.
Everyone watched in awe.
Well everyone except Tierra who was found on the couch eating Doritos from a bowl.
Amateur.
The bag is the bowl.
Sean picked her up in a silver sports car and took her shopping on Rodeo drive.
He mentioned that it was every girls dream to go shopping there and live out the Julia Roberts "Pretty Woman" fantasy.

I want to break something down for everyone.
You know what sounds like the WORST DATE EVER:
Trying on clothes in front of a boy.
I prefer to try on clothes in the privacy of an Old Navy dressing room where I can sweat to get the button fastened and weep in peace.
Knowing that I'm trying on dresses for a guy who's abs are chiseled enough to be the home of Mt. Rushmore Pt. 2?
No thanks. 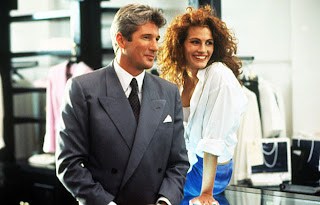 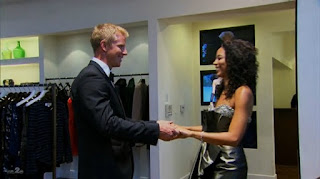 Also do women really have a "Pretty Woman" fantasy?
Because Julia Roberts' character was a nice hooker who gets picked up and treated like a queen for a week and then beaten up by George Costanza.
Not really my go-to dream sequence.

He also put a necklace on her with an obscene amount of diamonds on it.
Yet another fear of mine.
So many things could go wrong.
The clasp could get tangled in your hair.
You have a football player sized neck, and the chain won't fit.
It was uncomfortable for me to watch.

The conversation was really awkward too.
He kept asking her all these really deep thought provoking questions where she revealed she came from a broken family and only wanted to be married once.
However, we all saw the writing on the wall.
It was Leslie's time to go and he kindly walked her out.
Good news: She got to keep the earrings.

At the rose ceremony everyone was lashing out because Tierra is a dark cloud of hairspray and doom.
She said, "I'm going to win this."
To which I replied:

I may have gone overboard with that one.

Amanda ended up being the one to go home.
She tried so hard to be the crazy one...but when you have a presence as evil and strong as Tierra in the house she didn't stand a chance.

I don't even know what to believe any more.
It seems like Tierra just gets crazier and for some reason Sean keeps falling for it.
It looks like the TWO PART BACHELOR SPECTACULAR next week has a lot of dramz.
Mainly it looks like Tierra falls into a lake.

Next she'll be tying herself to the train tracks.
I don't think that's still a thing as this isn't a western...but who knows.
That girl is crazy enough to do it.