If I was a mature blogger, and able to take things in stride I wouldn't start of my recap with this but I'm shameless and I hate myself for doing it but here we go...

Last week I posted my recap on twitter.
My best friend Sara, who by the way is hilarious, and you should follow her on twitter (sir108), tweeted my blog link to Sean Lowe.

I didn't think anything of it.
I've tweeted to famous people before and never really gotten a response.
Well I mean,
Chobani and Cinnabon replied once...so I was thinking that was as good as it was going to get.
I had made peace with it.

You can imagine my surprise when I saw that Sean Lowe had tweeted Sara back:

I immediately called Barb Jones, to which she replied, "well how do you really know it was him and not just someone pretending?"
.
I then yelled that his account was verified and hung up.
Because I'm mature.

Then I really started doubting myself because one time I wrote Jonathan Taylor Thomas a fan letter every week and when I got an autographed picture back my friends at school told me it was a stock picture that everyone got.

So I needed confirmation from the source: 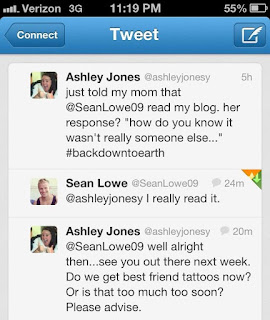 I haven't gotten confirmation if we are in fact making an appointment for our Chris Harrison holding a tray of roses tattoos yet.
However, I'm sure he'll get back to me soon enough.

Now that Sean and I are clearly best friends (right? that's how it works?) I was super pumped for this week's episode.

The first one on one date was with Sarah.
You'll remember her as the girl who has one arm.
You won't be able to forget that she has one arm because she mentions it every 2 to 3 seconds.

He picked her up in the very eco-friendly "Bachelor" preferred mode of transportation, the helicopter. 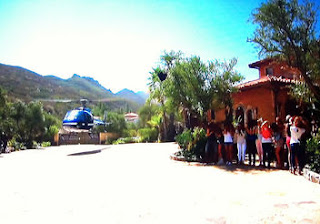 I swear y'all, they have more helicopter transports in this show than on "Grey's Anatomy." 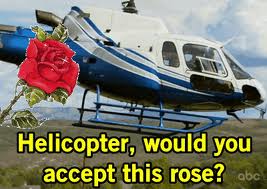 Sean takes Sarah to the top of a building that they are going to free fall off of which Sarah clearly believes.
I believe she really thought that they were just going to jump and Chris Harrison was going to catch them with a big net a la the circus clowns in "Dumbo" 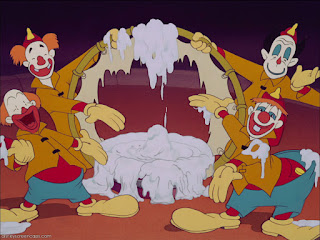 They actually just drop in one of those window washer cages which seems really cool.
Had they strapped some sponges to them, it would have been a productive date as well.
Window cleaning and fear falling...a twofer.

I don't necessarily think that Sean would have liked to continue a date with me after that adventure as I would become known across America as the "pee pants" girl.
Falling that fast, and with a cute guy next to you?
How do you NOT pee.
She should have gotten a rose for accomplishing that alone.

Anyway, they have a great time taking "a leap of faith" with each other.
(Barf).
Later Sarah tells the heart wrenching story of not being able to zip line in Vegas with her dad because she only had one arm.
It was tragic.
It's a right of passage to zip line in Vegas.
For her to be denied that was a true injustice.

Maybe it's rude of me to think that way, but honestly....it's zip lining.
Go down a long slide...it's about the same thing.

He gave her a rose.
She'll be around next week to tell us she's never been able to pogo stick before or something equally devastating.

The next date was a group date which are my favorite because girls lose their minds.
This date was awesome because they did covers for Harlequin novels which I am familiar with because my Meme is an avid reader.
A lot of girls had really fun sets.
I felt bad for Selma though who was forced to wear this hat: 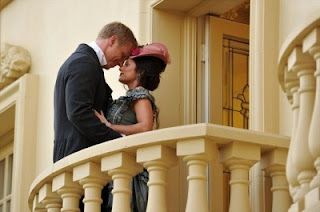 Everyone decided that they hated Tierra because she was fake and dumb.
(Duh.)

Sean told her he had a feeling she had a dark side to which she giggled and said, "No I don't."
Which translated in girl speak is: "I'm effing insane. Try to leave me and I'll kidnap your dog."

After that they all went back and had a pool party.
The pool party consisted of everyone sitting around the pool.
Not the noodle fight and barbeque cook out I was hoping for but entertaining nonetheless.

Poodle face killah, Katie was being weird all night and said that she wasn't feeling the environment: 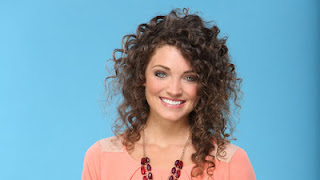 Which always blows my mind.
What kind of environment do you think you're getting in to?
So she told Sean she was ready to leave, and he didn't even put up a fight.
His response,
"Let me walk you out."
Throwin' shade Sean.
Throwinnnnnnn' shade.
I love it.

He had a cute convo with Lesley who is awkward and weird and I loved it.

Then he and Kacie had a conversation.
Sean offered Kacie his coat which most people find chivalrous.
To me I find that to be a terrifying offer.
Here's why.
What if a guy offers you his coat and then it doesn't fit.
And then you're in this type of situation:

It is a legitimate fear.
I would rather turn blue and die from frost bite than accept a man's coat.
And that concludes the insight into my crazy mind.

They also had a conversation about how Sean saw her only as a friend before, but now that she was present he started to look at her differently and that he was willing to take her out of the friend zone and see where things went.

She did some weird laugh and started giving sage advice to the contestants about what they should do and how they should act.
Her endearing qualities from last episode are out the window for me and I'm kind of over her.
She's like that one sorority sister that graduated but comes back to party every weekend.
She doesn't even go here!

His solo date with Desiree was next and I think she's so cute.
Chris Harrison turned the episode into "Punk'd" by setting up an art gallery and having her be accused of breaking a sculpture.

You could tell this is how Chris feels alive as he giggled in the back: 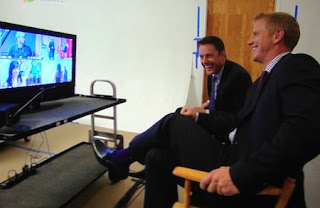 She took it well and laughed it off.
If it was me I would have left the art studio and ran home...to Philadelphia.
I would have been mortified.
Even more mortifying?
They went back to his house and got in the hot tub.
She of course looks precious in a bikini.
I would have worn a one piece and kept my t-shirt on in the water.

Another reason why I would be the perfect contestant next season....

They were really precious together and I like her which probably means she's going to like have a secret family or affiliation to a gang.

At the rose ceremony Amanda was wearing a knock off version of Belle's dress and acting like a freak. 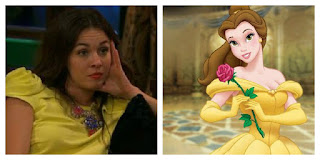 She wouldn't only activate and talk to people when she felt like it and insisted on giving everyone but Sean the stink eye.

He later ended up giving her a rose which allllll the girl were annoyed by.
With her and Tierra still in the house, I can't wait for next week.

Tierra seems to really step up the crazy.
I'm pretty sure this is when she throws herself down the stairs.
And because I'm an animal...I can't wait.

Who's your favorite so far?
I still haven't made my official pick.

I'm off to make Sean and I a burn book and friendship bracelets.
See you next week!