Last night started with a good metaphor.
See Sean working out in a gym...which good for him...watching his figure.
Who knew that's what he looked like without a shirt on huh?
Insane.
Just Kidding.
While I am in fact a never nude, Sean is consistently taking his shirt off and twistin' round his head...spinning it like a helicopter.

Petey Pablo reference?
Too much?
I'll keep going...
He says something about "how he has his work cut out for him"
WHILE HE'S IN THE GYM.
WORKING OUT.
GETTING CUT.
Bing bang boom.

The first date of the night goes to Lesley M.
Who I love, but is a little dead behind the eyes.
Like maybe she's seen some stuff. 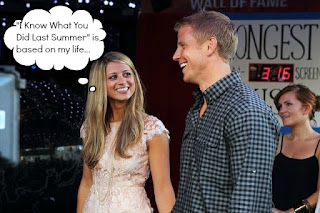 Either way he takes her on date where they have to break the world's longest on screen kiss record.
To be clear they have to make out in front of a crowd of screaming people for 3 minutes and 16 seconds.
Not only was it extremely uncomfortable as seen below: 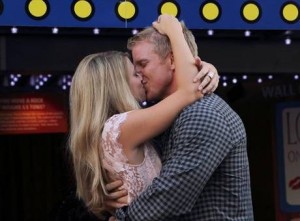 But I don't really think they have the record.
Why?
Because that's how I get guys to make out with me all the time.
And while the man that I promised a subway token to for his participation as the "representative" from The Guinness Book Of World Records is supposed to keep track of how long we've been kissing  usually walks off... I'm pretty sure I've beaten 3 minutes and 16 seconds...

Later they go to dinner and make out more.
I'm pretty sure the date was sponsored by Chapstick.

The next date was the group date.

The girls had to "Love & Baskeball" style play for Sean's heart in a game of beach volleyball.
I LIVE for these group dates because the girls lose their minds.
They play like if they don't win they have to give one of their kidneys as opposed to just riding home on the bus.
Also I don't know if it was just me, but their bathing suits were very "Saved By the Bell" spends the summer at the beach. 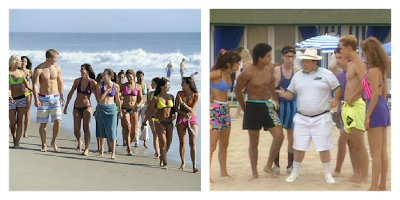 The game started at what I'm assuming was 12 noon and lasted until dusk.
They were terrible. 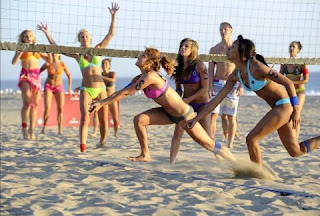 The girls that lost took it pretty hard.
As in they cried and said it was all their faults and it was the worst thing that has ever happened to them.

You know what was the worst thing that ever happened to me?
Getting lost on the beach in Wildwood, NJ for an hour when I was six.
Or not getting to go to DZ Discovery Zone for my birthday party because when Barb Jones & I went on a site visit she saw puke in the ball pit and said it was a dirty place.

Losing an extra couple hours with a hot dude has never been an option I guess so maybe I'm looking at it from the wrong perspective.

When the winning team got to hang out with Sean for a little bit longer Amanda and Des decided to fight.
I'm not sure about what.
It seemed really pointless actually.
So much so that I drowned it out.
I started listening again when Kacie had the drunken? wise idea to tell Sean about it.
Because her best friend, Des, fighting with another girl about a boy that all 3 of them were dating really took a toll on her emotionally. 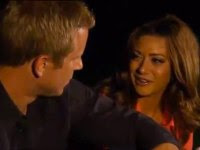 Sean seemed utterly confused just like the rest of us when she was recounting the story.
And just like that Kacie was ugly crying in the friend zone again. 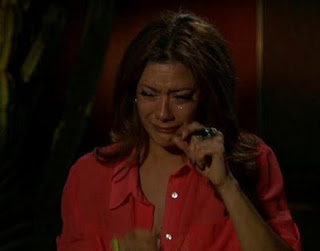 So I recant my statement from last week.
It may be that easy to sneak out of the friend zone, but it is just as easy to be deported..

That was mean and uncalled for.
Sorry Kacie.

The last date of the night is where the most dramz with a z happened.
First the person to read the date was Tierra.
This girl....lemme tell you.
She initially read the card as a 2 on 1 date, which everyone knows is when someone goes home.
She called out AshLee & Selma.
Then was all, "JK LOL Just AshLee with a capital L in her name for no reasonnnnuhhh. Baiiiii"
Because she's the worst.

Then SECONDS BEFORE Sean was supposed to pick up AshLee for their date you hear what I presume to be a bowling ball roll down the stairs.
With the way the fall sounded, this broad should have been a bloody bruised mess with like on shoe missing. 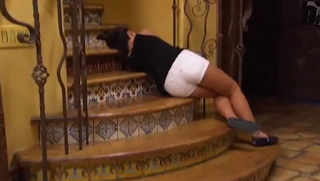 "But Jones, it looks like she's laying down for a little nippy nap on the stairs...not like she took a violent effing fall."
Right. I know.
Because she didn't fall.

When they strap her in to take her to the emergency room...because this is an "emergency" because she "definitely fell," and "is definitely not faking it." 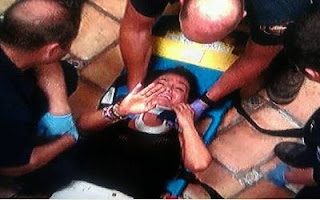 She said, "NOOOOO. LET ME OUT OF HERE. I'M FINEEEEEEEEUHHHHHHH."
Because seriously y'all.
She was fine.
As she didn't fall.

When Sean played right into her hands checked on her she was all of a sudden better.
How strange.
Say it with me and this cat:

This is a new low.
Faking a fall for attention?
I mean, mayyyybe AshLee shouldn't have admitted that she was bummed out that this was deterring from her date....but dang you do not give an EFFFF if that's your plan of attack.

She's going to fake a preganacy some how by the end of this and convince Sean that the baby is his.
Something about being in the hot tub...and that's how babies are made.
And because he's sweet and awesome he'll help her raise it.
AshLee's date finally started with her taking a ride in Sean's Jeep that didn't have windows.
I'm sure she was super glad she spent hours on her hair.

They then showed up at Six Flags where they spent the day with two awesome girls who had chronic diseases and loved the "Bachelor."
It was really sweet.
It did kind of bother me that Sean was like, "AshLee did so great with the girls."
Well yeah, hopefully dude. They didn't have unicorn horns and gills.

They were then all treated to a private concert by the Eli Young Band.
The two girls jammed on the air guitar while AshLee and Sean danced together.
Later, they sang another song to JUST the two of them and it made me wonder....
Do the bands ever feel weird for playing to only 2 people making out in a wide open space?
Also don't the people dancing feel weird?
I'm clearly not romantic enough for these kind of dates.
I would just melt from awkwardness.

Take me to a wing eating contest Sean.
Then you will see me at my best.
Ok, actually don't.


The end of the night girls were pulling Sean into random rooms of that mansion to convince them they were worth his time.
Tierra threw tantrums and pulled him away twice.
She really is a peach.
J/K I repeat she's the WORST.

I'm hoping that Sean sees how terrible she is soon, because it is apparent that she is there for attention.
Who am I kidding all of them are.
But I just want the nicest attention seeker to win his heart.
Because I just really think he's a muffin and want him to meet someone nice.

That's how this show gets me.
I can make fun of it until the cows come home, which, looking at the clock is soon, as their shifts are almost over.
But in the end I just love Sean and think he's such a nice guy and don't want him to get screwed over by someone who is really into being picked for next season's "Bachelorette."

He ended up keeping Daniella, or as I like to call her, Ke$ha: 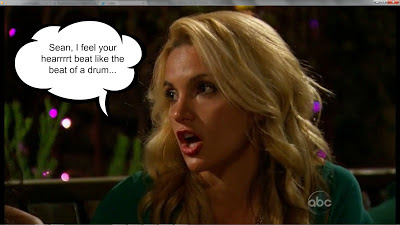 Which is weird to me because she seems really unpleasant.
He took Kacie outside and said he couldn't let her go through another Rose Ceremony knowing that they were only just friends.
So she's probably in hiding somewhere now.
Making a doll family from hairs she gathered during Ben's season and her own eyelashes that fell out while crying.

Ew. Again. That was mean.
I don't know where this rage is coming from.
Probably because they could've been awesome together and she HAD TO BE A GOSSIPPY BIDDY and RUINED IT.

Next week is roller derby and it looks like the women actually try to kill Tierra.
It looks promising.
See you then!
Email Post
Labels: abc bachelor 2013 saved by the bell sean lowe sponsored by chapstick