I'm about to go ham sandwich on this episode.

This week starts off with the girls finding out that they are going to the tropical WHITEFISH, MONTANA.
Or as the natives call it the Bahamas of the West.
They do not call it that...
But seriously "Bachelor"....Montana?
Last year you were going to Croatia (which I now know is NOT in Spain), London, and Bermuda.
Now Montana.
Don't get me wrong. It's looked really pretty.
I just want spicier locations.
(Chipotle for instance...seriously Sean would it kill you to take these girls to an indoor location for a nice whole plate of food?)

The first date was with  Lindsey.
He took her on a plane (whatttttt?) and then landed in some field where they made out. 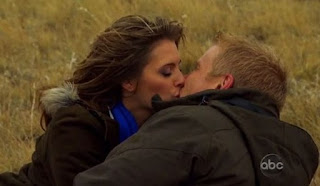 I don't know about you but I get nervous sitting in grass.
I'm convinced I'm on an ant hill and ruining every small underground creatures life.
I watched "A Bug's Life," a lot as a child and it has stuck with me.
Add making out with a hot dude to that and I'm essentially going to hyperventilate and I'll be taking a medivac helicopter straight to the nearest hospital...
Sexy. Real sexy.

Also did anyone else notice her say, "When I was an adolescent..." when talking about her life?
This isn't "Downton Abbey" girl...you can say "when I was a teenager..." We won't think less of you.
Perhaps she's just trying to look regal considering she did show up in a wedding dress the first episode. 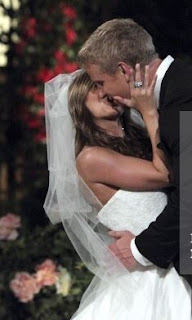 They then danced on an elevated platform in front of people during a concert...AGAIN.

Listen folks, the only people I wanna see dancing on an elevated platform are Justin, JC, Joey, Chris, and Lance.
Perhaps you know them?
They're part of the all male super group *NSYNC? 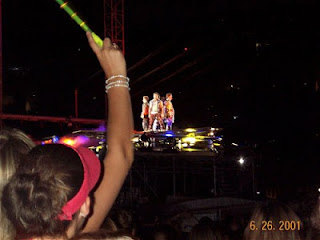 (via this angelfire site I found...)
Not two people making out.
It saddens me.

Anyway,
She got a rose.
To be honest she does seem like a nice girl overall so I'm glad she's sticking around a little bit.

Then there was the group date.
In the hills of Montana.
The girls participated in what my internet frang, Allie described as very "Double Dare"-esque.

I don't know why Sean is insisting these girls prove they could survive on the Oregon Trail.
Pretty soon they're going to be near a Cornucopia fighting for their essential materials (press on nails, hair spray, a bowl of 4 Doritos if you're Tierra).
I'll literally turn anything into a "Hunger Games" reference.
It's a gift.

Let me break down what their competition was:

Sarah, ONE-der Woman, didn't complain at all.
Which shocked me.
I was sure she was going to say,
"I'm scared of this challenge because goats fear me. Because I have one arm."
But she didn't.
She hauled hay, and wasn't a downer at all.
Actually she was pretty cool.

Des ended up chugging the goat's milk and her team won.
It was time for the other girls to hit the hay back at the hotel.
Get it?
PUNS

However, once at dinner, Sean dropped a BOMBSHELL.
The losing team was coming back!
The winning team was PISSED.
THEY WORKED SO HARD!
AND FOR WHAT?
NOTHING.

Let me reiterate what the winning team did:
-Rowed a boat
-Bailed hay
-Milked a goat
-Drank goat's milk.

Here's what they did not do:

-Clean up an oil spill
-Donate a vital organ
-Pick lice out of small children's hair
-Sacrifice the goat
-Survive a boat sinking in the middle of the ocean.

Thus I find their accomplishments to be pretty lame in comparison.

The girls came back and everyone was icy.
Especially Ke$ha, who seemed to take it pretty hard when she walked in on Catherine sitting on Sean's lap.
Which I had a whole other issue with.
You know what's worse than getting offered a guy's jacket?
HAVING THAT GUY ASK TO SIT ON HIS LAP.
Nope.
Not me.
Never.

Anyway,
She started weeping and Sean felt sorry for her and gave her the rose.
The women were furious because not only did they not care she was upset but she was on the losing team and still got a rose.
Their rage was real.
REAL LAME!
Burn y'all.
Major burn.

However, she said that she wanted to make sure she had the advantage and broke out of their holding cell hotel room out to see Sean. 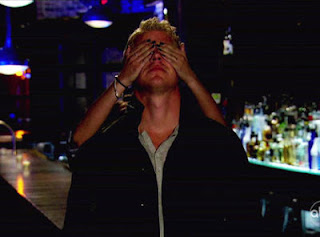 He was "happy" to see her and no one ended up knowing she was there.
Here's my question:
How the f did she escape from the hotel?
Why did no one stop her?
Does this literally mean there are no rules now?

I was livid.
Because I'm crazy.

The next day brought on another pioneer adventure.
Jackie, Sean, and Tierra took a horseback ride to another hill and chit chatted all day.
Sean tried to get Jackie to dish on Tierra, and she kind of caved.
He made out with her and then they went to dinner. 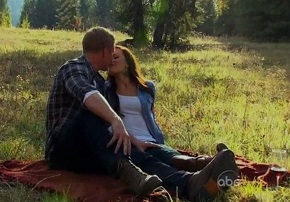 Let me tell you about this dinner.
It was hilarious.
No one was talking and you could audibly hear them swallowing their drinks.
I was cackling in my apartment.
Sean pulled Tierra away to chat with her and when he came back he uttered the best line in "Bachelor" history,
"Did you eat your fish? Good..."
followed by "So listen I'm sending you home...let me walk you out."

It was cruel...yet caring.
Didn't want to send her home on an empty stomach.
Traveling from Montana takes what 4 to 7 days?
I'm not sure.

As Jackie's limo rolled out, fireworks went off in the rear view.
Cold.
Ice cold.

The next day Tierra continued to complain about being "threatened."
She also stated that, "She came all the way to Montana...and it wasn't FAIR to her to be treated so terribly."
I would like to point out that everyone came to Montana.
It wasn't a special sacrifice she made.
I also never heard one of the women threaten her.
She also said,
"Sean's nice and all, and I like him, but I don't need this. I can go get engaged to any time I want."
This is about when my eyes popped out of my head and steam came out of my ears.
THEN WHY AREN'T YOU ENGAGED YET YOU SOUL SUCKING BOOGER FACE?

Sean walked by right as she decided to hulk out.
He then pulled Lesley aside and tried to get her to give him the details but she didn't.
SHE.DIDN'T.
I think that has a lot to do with the fact that everyone who snitches on Tierra gets sent home.


I was yelling at my TV.
Loud.
Real loud.
SHE LITERALLY SAID: "I COULD GET ENGAGED TO ANYONE."
THAT DIRECTLY EFFECTS SEAN.
HE WOULD HAVE SENT HER HOME.

Sean then pulled her aside and she gave him some sob story about how her ex-boyfriend was her best friend who died because he was an addict and she has problems giving herself to people because of her dead best friend boyfriend.

That's weird don't you think?
All of a sudden five weeks in we're learning about her dead boyfriend?
Girls drop those facts the second they step out of the limo.

The worst part:
SEAN BOUGHT IT.

Sean was also frustrated because he didn't feel like he knew if his wife was in the room anymore and I have to say I agree.
No one seems to care about him...they all seem to care about making him see why Tierra is Satan.

I'm bummed out.
I'm angry.
I have so many feelings.
If Tierra makes it much further, which is seems like she does via the preview of the rest of the season, I'm going to stroke out.
There's not anything good about her.
She's a second rate Courtney (from Ben's season.)
At least Courtney was good at being evil.

Courtney never cried to Ben about how she was being abused by the other women.
She just poured Visine in their food and called it a day.
If you're going to be a villain at least be good at it.