They're falling INTO love everyone...

I don't know if you know this about me but I love Hometown Week.
It's our chance to see where these weirdos come from and let me tell you this year, they didn't disappoint.

Our first date was with AshLee.
I was a little confused with how this date was going to go because through all of her weird abandonment stories I wasn't sure if she actually liked her family or not.

Like all dates this season, it started outside in a random field with AshLee and her yorkie dog Bailey.
Lindsay had a valid question that I was hoping would be answered: 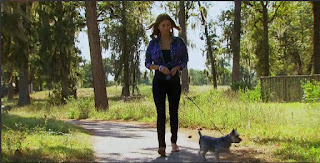 All these girls have tiny animals.
Once...just ONCE...I want them to have a werewolf of some kind.
"Hey this is my dog BUTCH. He's really friendly if you don't pet him or look at him in the eyes...let's talk about feelings." 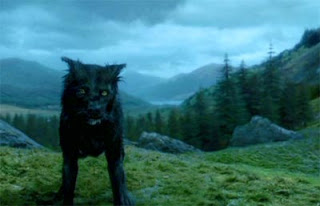 (This is actually Sirius Black as Padfoot...in case you were wondering.)

Conveniently AshLee had a picnic set up for them in a tall patch of grass. 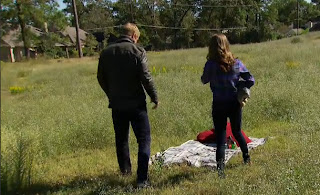 She stated very firmly that she was falling INTO love with Sean.
Not just in love...INTO love.
They drank wine out of these big ole goblets: 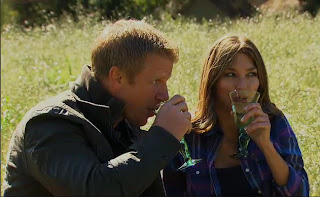 Which were also just casually placed on that holey blanket.

She kept saying how she loved him and how the day was perfect and how it was filled with pixie dust.
I think she must of had too much wine, because that "dust" was probably just a pack of gnats hovering over them.

Later they went to meet her parents.
I love Barb and Tim Jones a ton but I gotta say I'd be OK if Bruce and Deborah adopted me as their own.

AshLee told them all about her time on the show and it.was.awkward.
She said, "I'm going to be honest with you there was a lot of romance."

You know who doesn't need to know you are romancing anyone or anything?
Your parents.

But she kept on going.
It was weird.
I hated it.

She continued with her weird metaphors about being abandoned and how Sean makes her feel safe.
She said she had given Sean her heart to protect.
I'm pretty sure her chest cavity is the one doing all the work but I've been wrong before.

Sean talked to Deborah about how much he enjoyed being with her daughter and dang, Debbie is the coolest. 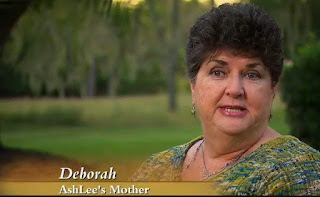 She rocked a thumb ring too, which you don't see a lot of older ladies stylin' and profilin' these days.

I found it odd that AshLee waited so long to tell us her dad was Mr. Belding, but I'll let it slide. 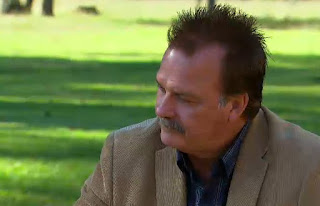 Mr. Belding told the story of his "first date" with AshLee which made me weep.
It was the sweetest damn story ever and I was super irritated that these were AshLee's parents and not one of the other girls'.

AshLee is getting creepier each week and super clingy. 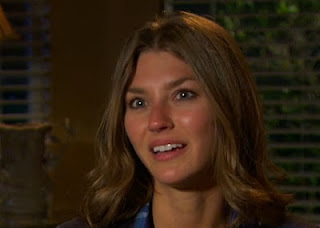 She also keeps saying "this man" when she refers to Sean and makes me irrationally annoyed.
So I'm over her.
I do not accept her rose.


The next date was with my second favorite Catherine.
They started their day off catching fish which I'm assuming is a Seattle tradition.
In Virginia we do more of a hillbilly hand fishing type thing so this was an odd tradition to witness.

I want to take a minute and point out to the producers that this man: 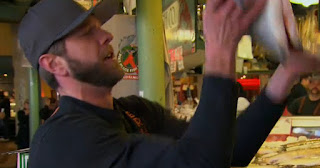 was muscular, strong, and beautifully bearded and should gimme a call.

No one really addressed the fact that the two of them didn't wash their hands after man handling fish which concerned me.
I mean did they wash their hands?
DID THEY?
DID THEY SPEND THE REST OF THE DAY WITH FISH FINGERS?
A little information about this would have been appreciated.

They also took part in the bubble gum wall, because apparently they wanted the effing flu:

Next it was off to meet Catherine's family which consisted of her Mom, two sisters, and Grandma.

Of course the first thing that they did when arriving was to show off Sean's personality by making him do pushups with Catherine on his back. 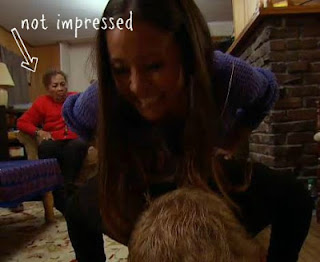 Grandma could've cared less.
My friend Ashley vocalized my feelings about the whole situation quite perfectly:

Sure Sean dressed in an apron and made food with Catherine's mom but the real winner of this hometown visit was this lady: 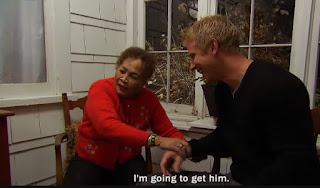 Then we met C's two sisters, who could only be named Anastasia and Drizella.
They acted exactly like the evil stepsisters from "Cinderella." 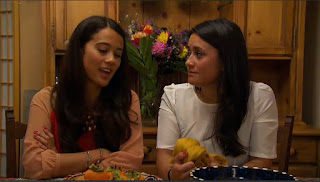 The bashed Catherine to her face and to Sean.
They said that she was messy...not dirty...but messy.
Lemme tell you something.
THERE IS NOTHING WRONG WITH THAT.
MAYBE YOU LEAVE YOUR CLOTHES IN THE DRYER FOR 3 WEEKS BECAUSE YOU'RE TIRED AND DON'T WANT TO FOLD THEM.
MAYBE YOU TAKE YOUR SHOES OFF IN RANDOM PLACES IN YOUR HOUSE AND LEAVE THEM THERE.
THAT DOESN'T MAKE YOU UNDATEABLE.
....so I've heard.

Those skanks ruined that date for me.
Sean and Catherine seem to really like each other and those two curmudgeons really put a damper on the whole visit.

The conversation with her mom was also strange.
Sean asked for her permission to marry Catherine to which she said,
"You've got 3 other girls. See what happens."

She kind of gave me the,
"I'm not like regular moms. I'ma cool mom,"
vibe, which only confused Sean.
Not cool.
Not cool at all.
Sean then went to see Lindsay.
The date was kind of uneventful honestly.
She made him do a weird obstacle course where she too had him do push ups.
Do you ever think Sean is like,
"Ask me to do a math problem or say the alphabet backwards. I'm not a piece of meat."
Probably not...math is hard.
Who am I kidding...so are push-ups.
I can barely push myself up out of a pool.
Lindsay told her parents that she wore a wedding dress the first night which made them giggle.
Good ole' crazy Lindsay.
The classic wedding dress prank.
Also is it just me or does she get a baby voice after awhile?

Her family really seemed to like Sean and he seemed to feel really confident about the date.
Victory.
While we were setting ourselves up for the best date of the night, my sorority sister Caitlin tweeted:

Which got me thinking about what my hometown date would be like.
I think it can be best summed up by this video of Barb and Tim:

It would be that for literally 8 hours.

Also how is it that the majority of these families have sprawling farms?
I thought the Joneses were fancy because we have a cool backyard.
Now I feel like my childhood home is a glorified tent.
Which brings me to Des.
They went on a hike because Des is outdoorsy.
Which is so weird because I don't know if you all know this but Sean is outdoorsy.
Because he likes the outdoors.
Because it's outside.
And he likes being outside.
Because it's outdoors.
I'm not sure if you knew that.
That he liked to be outside...because they haven't said that at all.
Did you know Sarah had one arm?
I miss her.
The next part of the date involved the two of them making dinner for Des's family who would be joining them.
SUDDENLY there was a knock on the door.
Some man barged in and said that he loved Des, he missed her, he'd been calling her, and she hadn't been answering.
He loved her.
A lot. 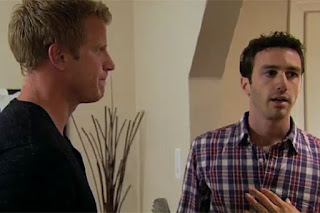 It was incredibly staged.
I had mentioned before to my Twitter frangs that I believed Sean was about to get pranked a la his hometown date:

And I was right.
He admitted that he was an actor and it was all a joke to get back at Sean for pranking Des at the art studio on their first 1:1 date.
I'm not a career counselor anymore, but I want to suggest to that guy that he should take some night classes because I don't see him as the next Ben Affleck.
Everyone had a good giggle and it was time to eat.

Her family finally arrived and they seemed very very sweet.
Let me back up, her PARENTS seemed really sweet.
I'm pretty sure I've seen her brother on an episode of "Lock Up." 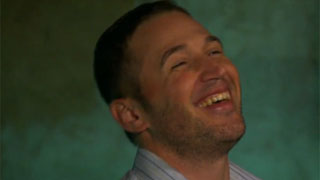 He kept calling Sean a "playboy" and thought Sean was in it for the "wrong reasons."
He kept saying he knew what Sean was really doing with his sister.
Climbing trees?
It only happened once!

After the confrontation at the dinner table Des's parents started talking about the weather.
Her dad literally said,
"We have 4 distinct seasons."
Her brother was such a jerk and really unreasonable.
I guess time in a tent changes a man.
All I know is Christmas is going to be TENSE....
(get it...tense...sounds like tents....and they lived in one?)

The rose ceremony was brutal.
Sean gave the first two roses to AshLee and Lindsay.
He was having a hard time deciding between Catherine and Desiree.
It was so difficult that he dropped the rose and left the room without an explanation.
I thought it was due to an unfortunate Taco Bell experience, but it seemed that it was just an emotional moment for him.

Chris Harrison showed up to Sean's panic room and gave him some solid advice,
"You'll do the right thing. Just make sure you don't mess it up."
Then in Chris Harrison fashion he rolled out to smoke cigs with the other producers outside.

Sean decided ultimately to send Des home.
He told her that he felt like he would regret the decision in the morning but it was what he thought was best.
Des tried her best to make her case.
At one point when they were hugging I'm pretty sure she tried to put him in the sleeper hold: 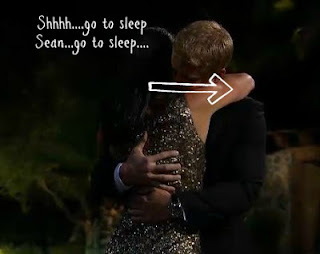 The whole thing was really sad.
I thought for a hot second he was going to keep her because as we know with this season there are no rules.
But he pried her off and sent her packing.

They probably made a pit stop at her brother's house where she then knifed him.
But that is only speculation.

Next week they're going to Thailand where I'm assuming everyone's hair will look super frizzy but they'll blame it on their love with Sean being so electric.

Tonight Sean tells all.
I'm pretty excited to hear what he has to say.
I'm also interested to see if Chris makes him do push ups while sits in a chair chugging beers.
Fingers crossed.