Is it too early for a favorite?

Well I wanna say this episode wasn't a huge mess of weird but I would be lying to you.

I don't know if Desiree promised tears to a gypsy or lost an arm wrestling match with Chris Harrison but the majority of these dudes are a tad over dramatic.

I don't know if there's a full moon or if all of the men's cycles synced together to make them a little over the top bananas but dang yall.

Brooks had the first one on one date this week with Desi-booboo.
She picked him up outside in her new whip.
Normally when anyone on this show gets picked up for a date it's common place for the men/women to crowd around the kitchen table and say good bye before they leave.
However, this group of ninnies has decided that every time a dude leaves for a 1:1 they are all going to file outside and heckle them and wave as they drive away.
I was half expecting the men to break out in this song to play them out: 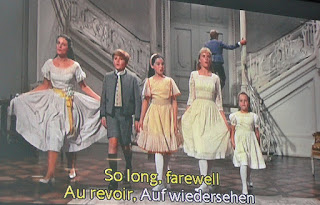 Their first date was pretty precious actually.
They went to a bridal store and tried on dresses and tuxes you know so Brooks could really comprehend Des's true passion of designing bridal gowns.
I find that can also be communicated by her showing him sketches and saying,
"I'm really interested in starting a bridal line." but that wouldn't take up 25 minutes of television. 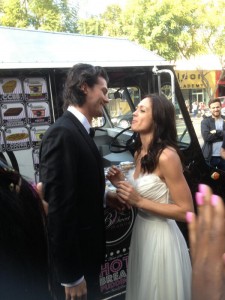 After the drove around doing wedding type things, they went up to the Hollywood sign and made out a bunch which was both cute and terrifying at the same time.
My luck would send me plummeting but Des isn't top heavy like me so she can make those dates work.

Then Des drove to an abandoned bridge where a magical dinner was set up for both of them.
After Brooks divulged his past, Des politely segued to the distant music playing in the background.
"Do you hear that? Let's go closer! This is totally safe and a surprise all at the same time."

The run over to find a private concert for just the two of them and Andy Grammer! 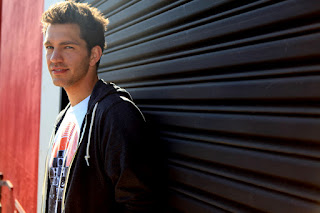 Now in all honesty I love Andy.
Love him.
So I would kind of dig the date.

I just can never get over how AWKWARD it must be for the performer to have to sing for a crowd of 2 people....who are mainly interested in making out with each other pretty intensely.
If I were Andy, this would most likely be the conversation:

"Seriously guys, pay attention for one song...that's all I'm asking. I wrote this ballad from the heart.
Brooks, dude, come on, two seconds with your hands not on her butt. Eyes up here.
Now sing with me, 'Ya gotta keep your head up Ooooh oo---OH COME ON DES--SHOW SOME RESPECT.  JESUS TWO MINUTES OF ATTENTION IS ALL I ASKED FOR---you know what fine. I hate you. Do what you want, I'm still getting paid....Harrison owes me...5-6-7-8...."
I really thought that one out.

I don't know if it's because a lot of the guys this season are a bunch of legitimate weirdos or because I'm entranced by his hair and white teeth but I think I'm already attached to Brooks.
He's my early favorite.

Naturally the group date was next.
What did they do?
Oh you know just casually fulfilled one of my personal life long dreams of FILMING A RAP VIDEO.
Let me back up a minute.
They filmed a rap video with Soulja Boy who helped them with their "Bachelor-ized" rhymes. 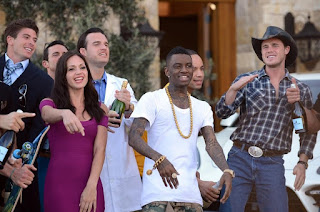 This picture pretty much sums it up real nice.
(via)

I was watching tonight's episode with Tim Jones and he was a little confused that the men weren't really creating a proper Soulja Boy performance.

At the taping everyone seemed to be fairly pissed at Ben.
No one really said why, just that they didn't trust him and didn't feel like he was telling the truth.

I personally don't see him to be Tierra-ish yet.
He just seems to not give an F about the other guys and really wants to maximize his time with Desiree.
So what I'm saying is, he's smart.
Mikey T. and Michael G. on the other hand are big fans of pulling Ben aside and telling him how upset they are with his actions.
Maybe if they focused a little more on getting time with Desiree and making the most of it they won't have to worry so much.

Barb was also a little confused as to why the guys were so upset with Ben.
I told her that Ben brought his son the first night.
Her response:
"That's like bringing a puppy. Not cool. Also I hate Mikey T. He's gross. Tweet that."

Brandon got a little weird during the date, saying that he didn't expect to have fallen in love with her...I guess alluding to the fact that he had already.
Which is normal.
Because they've been in the same proximity for a week.

He then told her that he was born (spoiler alert), grew up (shocking), and then his dad ran away.
Where? We don't know.

However, he raised his family because his mom was addicted to drugs.
I thought last week he said she was an alcoholic but listen who am I to fact check?

He also taught us that: 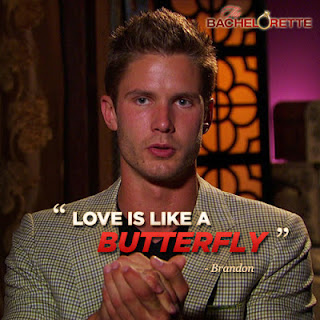 Ben received the rose for the group date and I'm fairly certain that Mikey T seriously considered putting out an Amber Alert for his son, so that he would have to leave.

The second 1:1 date was with Bryden.
They went on a road trip together and it seemed pretty boring.
At one point Des tried to fly a kite, which more looked like her running smack into a rock:

That might have spiced the date up a little bit.

Bryden told Des about a really terrible accident he was in years earlier and conveniently had pictures of it with him in his jacket pocket.
She was touched.
They went to the heated pool.
They had the following conversation:
"Today was awesome."
"Yeah it was awesome."
"Yep. It was awesome how awesome today was."
"You're awesome."
"Hey you know what was awesome? Today."
FINALLLYYYYYY
Des said,
"Kiss me already."
And he did.
Had she not made that move I'm certain they would still be having that conversation in the same pool but just with extremely pruney skin.
He got the rose.
Meh.

At the rose ceremony Michael G was going to have his moment with Des where he revealed his secret:
He has type I diabetes.
Yes. Diabetes.
That was his confession.
He had a fear that Des wouldn't be open to this because it was going to impact her life should they be together.
TO CLARIFY:
He has diabetes.
Not a twin growing in his spinal cord.

To which I replied:

While he was letting it all out, Ben interrupted and sent Michael G. and Mikey T into a frenzy.
They pulled him aside AGAIN to say it wasn't fair for him to keep butting in to their time with Des.
Michael G. looked like he was going to cry, but I'm pretty sure if he would have just eaten the Snickers that was offered to him during his tantrum he would have stop acting like Maxine from the Hallmark cards. 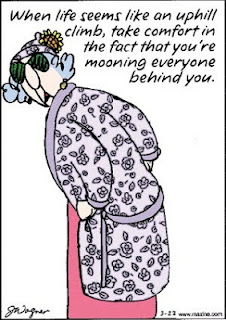 That big ole baby got a rose at the end and so did Mikey T.
Urkele didn't and Gale (Robert) was also sent packing.
Nick M. clearly distraught and got lost 3 separate times trying to leave the house
Next week looks awesome.
Someone's girlfriend shows up.
There's a fist fight.
The men make Ben into even more of a villain.
Ben wears the same tank top Ryan wore all last season.
Things are looking better folks.
As Andy Grammer would say,
"Keep your head up! NO SERIOUSLY DES LOOK UP HERE. I'M SINGING."
Still not funny?
I'll see myself out.
﻿