I think this season is sucking out my recap mojo.


Even with the mega fight that happened this week I keep thinking how much I miss Sean.

I hated Ben's season with a fiery passion but at least Courtney was crazy enough to carry me through.
The only thing I'm clinging to is that we'll get to see Brooks and Chris more because I think they're weirdos and kind of love them.

I don't know if this recap is going to please Grace but I'll do it because like I've said before....she's threatened my life.
I feel like if I mention it enough and one day go missing...people will check under one of Bash's blankets for me.


Des shows up in Spain and exclaims,
"I'm in Spain."
So we're off to a good start.
She says that Spain is full of life as she walks through the streets looking pretty dead behind the eyes.
I don't know if she touched on this at all but I'm pretty sure she's killed before. She's super excited for her time in Barcelona and can't wait to see all the guys.

Meanwhile Chris meets up with the dudes and tells them that they are also in Spain
& that there will be dos 1:1 dates and uno group date.

Chris lets the guys know the first 1:1 date is upon them and Drew is the lucky guy.

They show Des walking down the street pretending not to know exactly where Drew will be...
Somehow she stumbles across him (thank God) 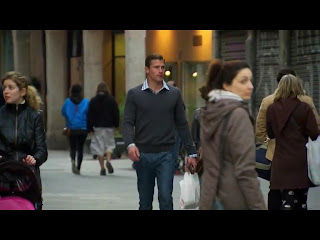 and she exclaims that she is hungry for some tapas.

That is a phrase I have never and will never say.
Mainly because tapas are really mini appetizers, not a meal and should not be treated as such.

As soon as they sit down Drew tells Des about his dad and how he was an alcoholic and did a lot with the AA program.
Which kind of makes him un- anonymous now but whatever he's was divulging a lot of information and I'm sure she didn't want to correct him.
He starts crying she starts crying.... their already pretty stupid tapas is getting soggy.
It's a big ole mess.
Then Drew tells her that not ONLY was his dad a recovering alcoholic he also has aggressive cancer.

Uh.....Drewbie Downer...can we take a minute to just pause and recognize how you may be dealing with the most serious sitch of everyone and we're now just hearing about it?

Also...you didn't really spare any deets did ya?
Sheesh I was crying into my cheese.
A whole block of it.
Because unlike you two I don't believe in small portions.

Anyway Des gives Drew a hug with no expression whatsoever.

As they walk thru the streets they make out.
They go to dinner and he drags her to an alley...
where they make out...
Des says they're kissing in such a great way, which is descriptive.

She gives him a rose and he immediately turns into business Drew where he then tells her everything that James had said in the van from last week.

Des responds politely:
Back at the hotel Kasey does what he does best and narrates the next steps
-There will be a date card.
- It will mostly likely be the group date.
-His name might be on it.
-He will have to balance his feelings for Des while balancing all of his feelings that he has about this James situation.
Wait what?
How about no one pay attention to James and let him have a roid attack and prove what a jerk he is on his own...
But Kasey cannot.
He informs us viewers that should he be on the group date it will be a very nerve wrackting experience.

That's not a typo.
He said nerve wrackting.

The date card arrives and Brooksie-Poo reads it.
They're going to play soccer. 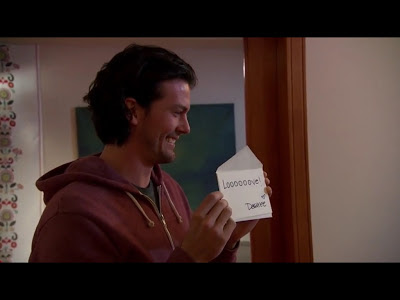 Once they get there the men find out they will be playing Desiree and a professional women's team from Spain.

All of them start LOLing because there is no way a bunch of girls can beat a group of guys.
Michael G. informs us that you can't hit a woman but you can kick a soccer ball out from under her. 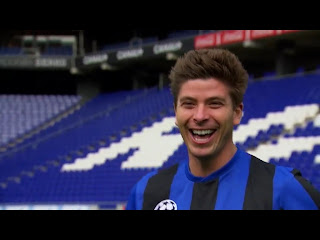 The guys were then miserably beat by the women because James, being the big dumb oaf that he is, missed every ball that flew by him. 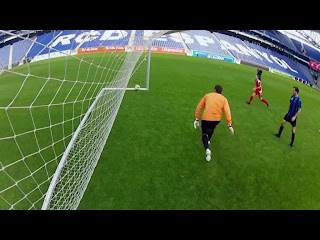 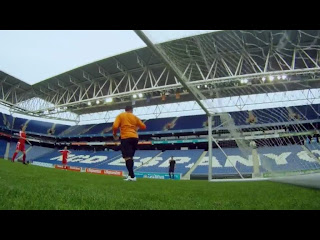 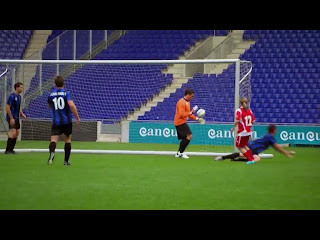 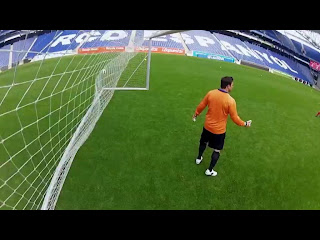 Each time he missed he looked so confused.
I  could have done a better job being a goal tender had a just laid in the net.

His poor performance led the guys to further revolt against him.
They said he wasn't interested and wasn't into Des at all which was real true.
She even noticed it calling him an outcast.

After the game the guys and Des have their usual after party.
Des steals Chris away and reads him a poem that she wrote.
It was quite a few stanzas. 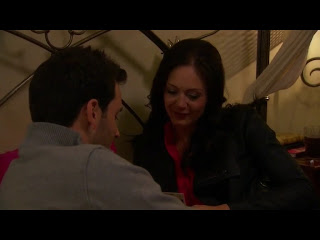 Then when he returns downstairs the battle begins.
Kasey confronts James telling him about the conversation that he and Drew heard in the van. 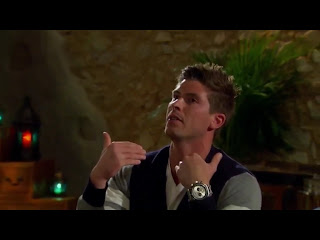 He told James that he heard him say he would have a great chance to be the Bachelor if he made it into the final four.
James then begins to say he never said it.
Michael for some reason jumps in and says that he's appalled and can't believe he would do something like that.
James said that they wouldn't understand because he went from a great 1:1 date to having to only go on group dates and that was really hard for him.
And who cares if he was thinking about the future if things didn't work out?
He was being realistic.

Michael says that James needs to not counter accusate (an official lawyer term I'm certain) and then James yells at him and says,
"YOU HAVEN'T EVEN BEEN ON A 1:1 DATE MICHAEL."

James continues to insist that he only thought it was a good conversation to have because he wanted to go on Mikey's boat and that it was all Mikey's idea.

He also says all of this yelling and not looking any one in the eye.
I have seen these tactics before.
On "Flavor of Love."

Meanwhile Chris is trying to diffuse the situation by shushing everyone. 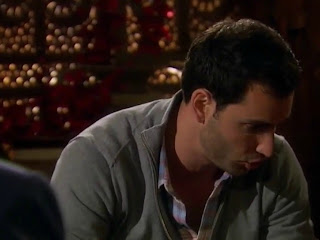 James then tells everyone he wasn't trying to be sneaky in a car that he was the size of.
Let's break that one down.
James is saying that he is the size of a car riding in a car.
Thus...not sneaky.

He leaves and Michael G reveals that if Des lets him stay everyone will collectively sh!t in their pants.
So when he says collectively does that mean they all share a pair of pants?
Little a sisterhood of a traveling pair?
Who's the Blake Lively character out of their bunch?
Oh I'm reading too much into it?

Des comes down talks to James and it goes no where.
He tells her a lot of things that I don't think he understands and says that the worst thing that could happen to him if they break up is that he could become the Bachelor one day.
Are you confused?
Me too.

Des doesn't give a group date and goes home. 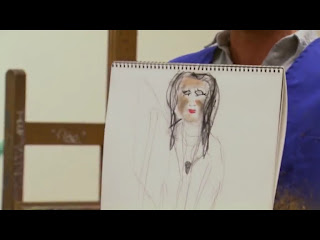 Zak is really growing on me.

I like him a lot.
He's funny and nice and actually talks to Des and asks her questions about herself.
I would watch a season of him dating girls.


He ends up getting the rose.

In the hotel James confronts Drew about the conversation he had with Mikey.
This will never end.
He just keeps saying it wasn't a bad thing for him to think ahead and to want to picture what his next steps were should this go south.
Drew then states, that James wouldn't go up to a girl he's dating and say, "If this doesn't work out I'm going to date the following people..."
Which I'm not sure is entirely true.
I kinda think that James does that regularly.

After their argument he goes and sits on the couch: 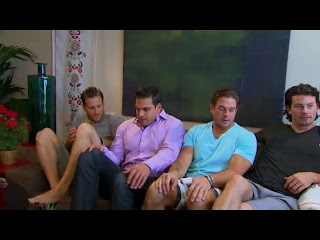 And makes everyone feel really cozy.
At this point my RA Alaina, who watches with me just about every week, asked,
"Why does he buy all his close at Baby Gap?"
Good question Alaina.

Des comes to pick him up and they talk outside.
I literally have zero clue what came out of the conversation.
Mainly because I was mesmerized by James's man boob sweat.
Moob sweat if I may. 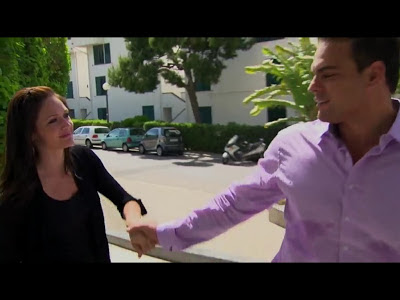 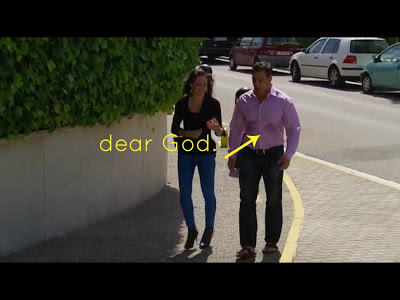 At the rose ceremony no one knows what's going to happen but 3 people are going home.

Because of that everyone is very worried about the fate of James.

Considering she's been fine with everything else under the sun I was very surprised by the fact that she let James go.

Mainly because she cried about how hard things were for her even having to know about what James had said.
During this sob fest my Twitter frang Linsday asked if I had checked out Des's giant man hands.

Homegirl was not lying: 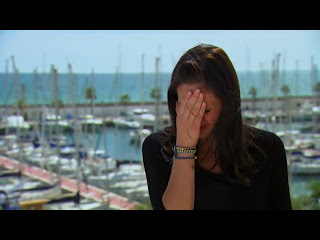 The first two roses went to Chris & Brooks.
The 3rd and final rose went to Michael G who quickly ruined his moment by saying, 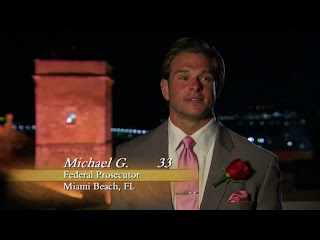 "People vs. James. Case dismissed."
We get it.
You're a lawyer.

That left Kasey, Juan Pablo, and James without a rose.
Kasey bounced out like a little kangaroo without a care in the world.
Juan Pablo cried and that was heartbreaking.
Then James said, he couldn't believe he had gotten eliminated based on a conversation he had in a car about REALITY.

I think they edited it a little because what I'm pretty sure he actually said was,
"I had a conversation in a car about my future in reality tv."

I'm a little confused as to what the previews mean for the next weeks ahead.
It looks like she cancels the show but if I've learned anything, it's that you can't trust these shady producers.
So who knows.

Viva la Brooks and Chris.
And maybe Zak.
Don't bring any douches back.