It is well documented on this blog that I am an *NSYNC super fan.

I celebrate JC Chasez's birthday every August 8th.
I remember that he was a Leo and afraid of needles which is why he didn't get tattoos with the other guys.

I owned a "Fumanskeeto" t-shirt from Chris Kirkpatrick's fashion line.

I was a big fan of the "On the Line" soundtrack hit by Joey called "Falling."

I still own these:
You can imagine my excitement when I woke up two days ago and read the headline,
"*NSYNC to reunite at the VMAs this Sunday?"

I pinched myself.
Surely I was still dreaming.

Justin has repeatedly said that there would be no reunion.
You know...
because he's too busy...
because he hates me....
because he doesn't want the world to be happy...
There's no way that out of the blue the five majestic unicorns that I have loved since the age of 11 would be returning to the VMA stage once more.

I had stopped getting my hopes up for it to ever happen.
But something about this just felt right.

Maybe it was finally time.

Perhaps Justin recognized the pain he was causing.

Did JC finally find time during his "America's Next Best Dance Crew" hiatus to grace us with his presence?

Were we waiting for Joey to finally get that time off approval from his night shift at Applebees?

Was Chris able to step away from his "Braid-y Bunch" shop that specializes in terrible hair trends for men?

Were the stars aligning to create another award show masterpiece such as this:

That's what I thought.
And still think might happen this Sunday.
Despite what that BOOGERFACE Lance Bass said on his Sirius XM radio show.

What did he say you ask?

This bull:
"I have to address the rumors…this morning I woke up to a lot of rumors flying [around] that the NSYNC reunion is happening after eleven years at the VMAs this Sunday. Well, let me tell you how this all came about. Justin Timberlake is getting the Michael Jackson [Video] Vanguard Award this Sunday at the awards, so of course people are automatically going to think we’re going to be there performing, but this is exactly how it happened and I knew these rumors were going to fly. We all came down here [to Miami] except for J.C. [Chasez]—J.C. stayed in California, he had to work…Joey [Fatone], Chris [Kirkpatrick] and myself went to go see Justin’s last show with Jay Z at the [Sun Life] Stadium last Friday, and I even took a picture of it, it’s on my Instagram…[it was] really fun and…I think that’s what started the rumor that there’s going to be this big reunion with NSYNC…it’s amazing to see the reaction out there on Twitter and social media…[and] how many people are supporting NSYNC. It’s so nice to see because when we ended things [over] ten years ago, there was no social media, there was no Twitter [fan base], but it’s so cute to see how many people are supporting [us] and NSYNC was even trending.” (via)

OH REALLY LANCE?
IT'S CUTE TO SEE HOW MANY PEOPLE ARE SUPPORTING YOU?
ME AND MY CREW DON'T TAKE APPRECIATE YOUR CONDESCENDING TONE. 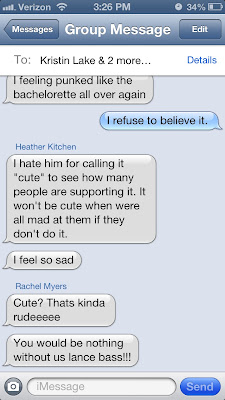 Yeah Lance. Where would you be without us?
"It's Gonna Be Me" who buys your concert reunion tickets LANCE.
"It's tearing up my heart" that you don't give a what what about my emotional needs.
"This I Promise You," Bass ....if you don't make your five angelic voices combine in beautiful harmony this weekend I will sell only YOUR bobble head and marionette. Sure it makes the whole set less valuable but THAT'S NOT THE POINT.
It's about what is right.

And what is right is that you dress up in 5 matching outfits like the grown ass men that you are and get to dancin'.