I've opened up on the blog before about being a garbage disposal.
I've confessed how much I hate exercise.
And it's been kind of a huge relief to type it out into the universe.
So, I'm here to do it again.


To be honest I've been a little absent from the blog world because I've been in a funk lately.

Since middle school I have been kind of an anxious monster.

Natalie Dee once did a cartoon that pretty much sums it up:

I promise I'm not going to give a sob story about a terrible life.
In fact I've got a pretty great one.
I have an awesome family, great friends, a sweet job, and a drawer full of hoodies.
The only thing really missing in my life is a dude to hold hands with and a puppy.

But still I find myself sitting on the couch sometimes willing myself to get up and go get paper towels from Target instead of continuing to use my t-shirt as the alternative.

I still have weird panic attacks that I'm a truly terrible human being and that Barb & Tim have my friends on a payment plan to keep them around.

There are days when I've convinced myself that not hearing from a friend for 6 hours means that they remembered something that I said 8 years ago and it has really thrown them over the edge.
Even if I haven't know them for 8 years...same concern.

I bought a pair of glasses a month ago and was too nervous to wear them out in public because I was afraid I would be accused of eating Zooey Deschanel.
Who worries for a month about wearing glasses?
Why is that a thing that I thought was normal?
I need glasses to see....but I was more concerned that people would think I looked like a huge hipster nerd...so I didn't.
For.a.month.

It all boils down that shitty thing called self-confidence.

I hate that I feel gross about myself.
I hate that I've said that I was going to sign up for a 10k and don't think I've ran a 1k since I posted about it.

I pin a ton of crap about eating clean but convince myself that just cleaning my hands before I eat should do the trick.

I don't want to be the girl who cries fat and then does nothing about it.
I don't want to mold to my couch because I'm too unmotivated to karate chop my way out of a bad week day.

I have had a new pair of running shoes that I love sitting in the box because I'm too afraid to get started.
What if I give up again?

What if I'm not wearing a supportive enough sports bra and my boob goes flying and gives an unsuspected bystander a concussion and then I enter into an "Orange is the New Black" situation for carrying a concealed weapon?


If someone takes a picture, on the outside I'm like "haha yeah everlasting memories!!!! wooo."
On the inside I want to grab their cameras a la Kanye West and destroy it so I never have to see what I look like. 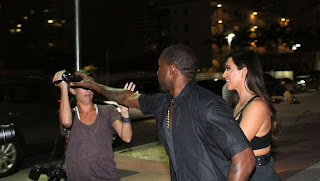 So, after wallowing in self pity for the better part of the past 3 weeks I've decided to take it to the blog.
Do I want sympathy?
No.
Do I want compliments?
Nope.

What I want is to put it writing that for once I'm going to give myself a solid shot.

I have to prove to myself...and only myself that I am capable of making a change that is healthy for me.

So instead of promising some lofty exercise goal that may or may not happen...I'm going to promise myself this:
I will no longer talk about myself like I'm some big dumb ape.

Hating & doubting myself is what got me into this mess to begin with...add a dash of anxiety and blammo:
Barf city. Population me.


I don't need to be the butt of my own jokes when it comes to my weight.
My weight isn't what defines me...or my humor.
So I'm done being a hater of myself.

Miley Cyrus...you're not safe.
Celebrities and reality show contestants: you're not either.