On Friday, I claimed that I found myself a bully.
Someone to call me names and motivate me to go out there an be somebody.

Her name is Allie and she is from Pittsburgh, PA, and dammit she is funny.
And mean and terrible, and I'm going to take her down, and so forth and so on, etc.

To be honest, it's nice when you find someone who is going thru it with you.
Not that you wish feeling gross about yourself on anyone, but when you find a sister or brother of the traveling yoga pants not used for yoga, it's kind of a relief.

That's why I'm so glad to be doing this challenge with her.

I don't know the rules really.
We're coming up with a stake still...
I wrote that and thought....hmmm maybe we buy the other one a steak,
BUT THAT DEFEATS THE PURPOSE JONES.

While we're figuring out the details, meet Allie, and try not to love her too much.
Because seriously: so funny.
But remember:
She's my competition.

So here's me in a nutshell:
Yes, in case you were wondering, I definitely have my Master's in Microsoft Paint.

OK let's be serious. Here's me in a nutshell: 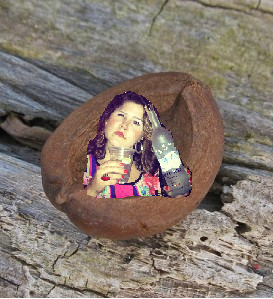 I've been overweight my entire life. As a kid, I shopped in the husky girls section at Sears and then it just never got easier.

Finding clothes has always been a chore and, more often than not, I buy something just because it fits. That's no way to live. I want to try something on and buy it because I LIKE IT (crazy, no?) not because it fits and I'm settling for it, ya know?

I've gone through multiple yo-yo dieting phases and have had some successful weight loss over the years. I was at my heaviest in 2006 when I graduated college - hovered around 270. When I saw myself in my graduation pics I was appalled and thought, "No f**king way I'm that fat?!?!?" So I started going to Curves and the weight melted off. Over the next 6 years I fluctuated between weights and diets and sizes. I was at my skinniest in 2008-2009 at around 199. I have always had an unhealthy relationship with food and that's why I continue to struggle. I HATE when people take my full length picture and I'm sick of saying, "OK let's get one from just the neck up!" It's not because there's anything special about my damn face, it's because I hate my body and hate that feeling I get when I see it next to my (skiiiiiiinny) friends in photos. I've mastered the art of hiding the double chin and standing in more flattering positions. For the most part though, I'm sick of standing in the back and trying to hide/blend in. Then again, a good photobomb never hurt...but that's a different story.

This is about 4 weeks ago:

Sure, it might not look too bad, but only because I cropped the other people out of it. I was trying to hide behind my BFF (who is 5'1" and probably 100lbs.) and my other friend's baby (ain't no shame in my game) in order to cover some of my girth. And that pose? Not because I had to pee, but because I was trying to hide the size of my legs. Trust me, if that was just a full length shot of me standing normally without the sweater or the human shields, the lunch lady arms would be a-flailing and the back fat would make you wonder if I put my boobs on backwards or something. Also, allow me to point out, it was about 90 degrees that day and I WAS WEARING A LONG-SLEEVED SWEATER. Hello. Hefty people sweat, y'all, and yet I felt the need to wear a sweater over a really cute dress?! I'm so done with my body embarrassment.

Aaaaand finally, this is circa March 2014 at Mardi Gras. 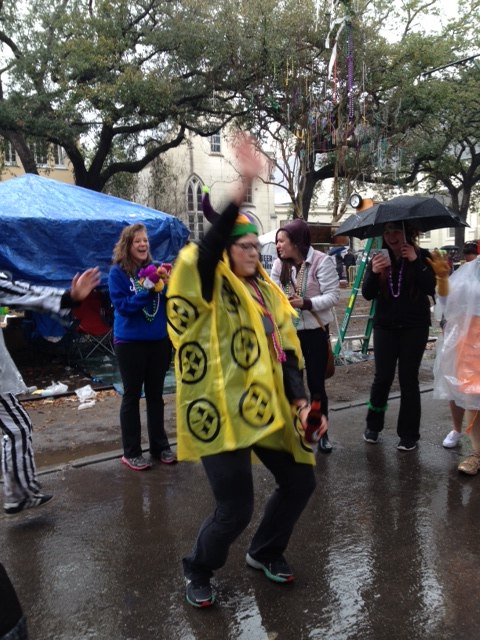 Just doing the Wobble and other dancing in the street...in a Steelers poncho...with a bunch of random people. Look, I'm no stranger to a) day drinking, b) a good time, c) acting like an idiot. I just wish there never had to be photographic evidence of it. My sister took this pic while I was dancing and I was like...oh hell naw:

I know what I have to be doing to lose weight and feel good about myself, but the act of doing it is so hard. Currently, I'm at 237 and never wanted to be this big again. I'm mad at myself but motivated to change, hence challenging Jonesy to an east vs. west aka Biggie vs. Tupac weight loss battle. We are two peas in a Pennsylvania pod and hopefully, by sharing our story with random internet strangers, we can GET SHIT DONE.

I've been rocking a FitBit Flex for a few months now and I LOVE IT. It's nice seeing how many steps I take and how many calories I burn (and how many I don't if I'm having a lazy day!) and I highly recommend some sort of tracking device. Shit, if it's good enough for Dave Sedaris, it's good enough for me. Friend me on FitBit at https://www.fitbit.com/user/2G876J to KEEP ME MOTIVATED!!! And if you're so inclined, you can follow me @alliewagon on Twitter and/or Instagram.

I've said it before and I'll say it again - I'm sick of feeling like a prisoner in my own body. I have a job that pays the bills, some AWESOME friends who I adore, and a family who drives me nuts (but who I love a ton). I love to travel and explore. I'm single but can't get past the need-to-lose-weight-before-trying-online-dating phobia. Call Michael Jackson because I gotta make that change. I'm a fun-loving (but also super sensitive) person who always turns to jokes and sarcasm as a defense mechanism. I want to look and feel confident and rock my 30s
. Age ain't nothin' but a number but that doesn't mean I want to spend this next decade as chubby as the previous one. 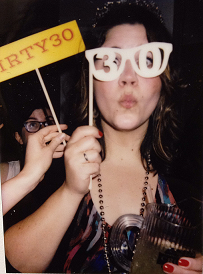 Last but not least, if anyone wants to join the weight loss challenge, send your weekly weight to missalliewagon@gmail.com on Weigh in Wednesdays (WiW) and I'll track it! We're going with percentage loss calculation. Is there a grand prize? Who knows. I'm just in this to feel better and do a little motivational trash talking along the way.