When I said I would watch "Bachelor in Paradise," I thought it was going to be a cheap substitute until they announced the next Bachelor.
And it is.
But it is so so so fantastic.
It is the trashy television dreams are made of and I'm 100% invested.

We were greeted in paradise by a Chris Harrison who has decided to use this opportunity to wear a mint suit. 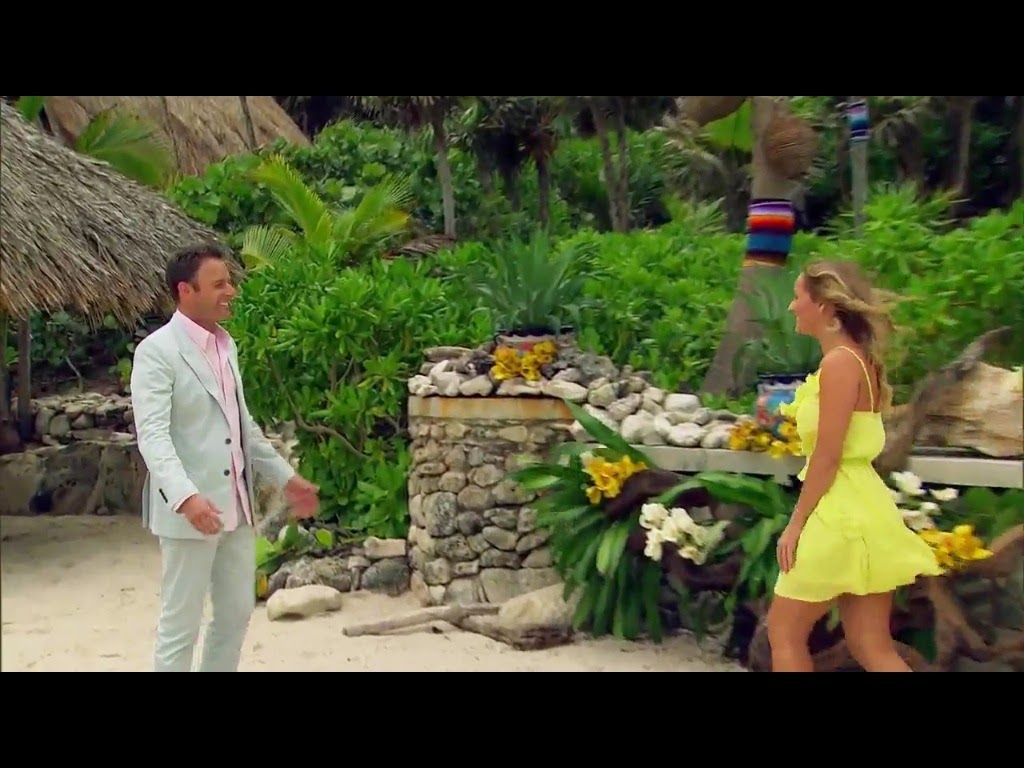 Clare was the first to arrive and man was she crazy as ever.
Marcus was next and although he was still heart broken over Andi, he was pumped about the ample space on the island to hide the bodies of lovers who scorned him.
One armed Sarah is back.
She talked about having one arm 2 seconds into her introduction.
It's good to see something remain the same. 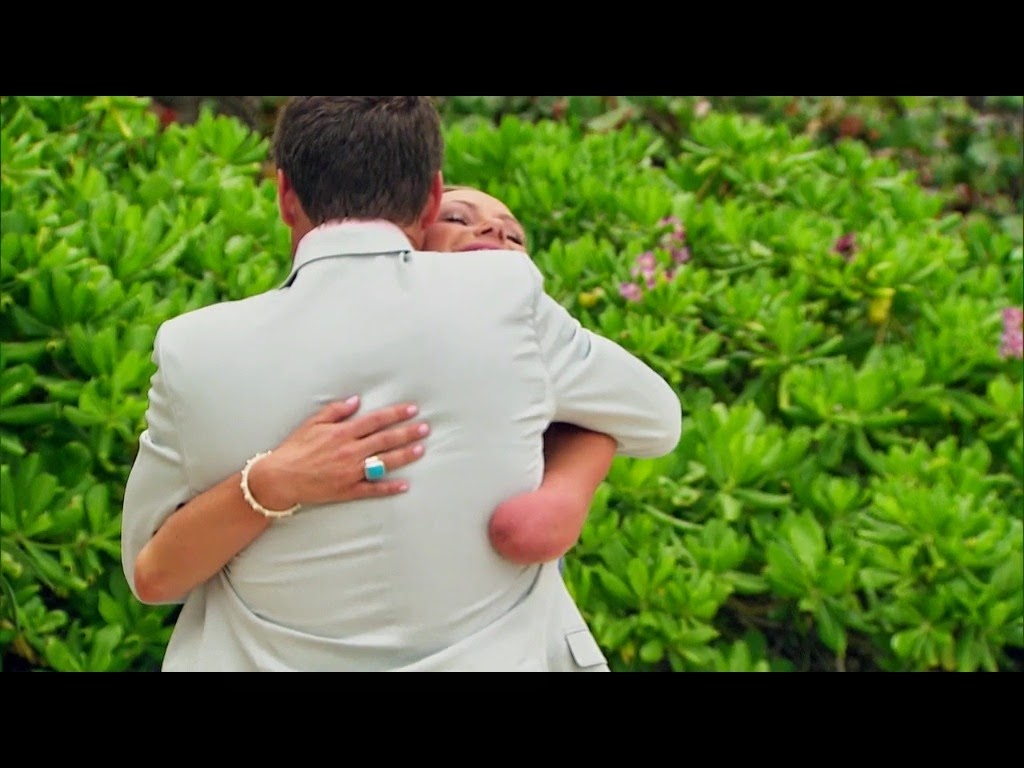 I'm actually really excited she's on this season, because she seems like a super fun lady.
I say that purely from the information I've gathered via Twitter.
One time she tweeted that she loved anything buffalo flavored.
That's a gal that deserves only the best in life.

My main dude Marquel showed up looking delightful as ever. 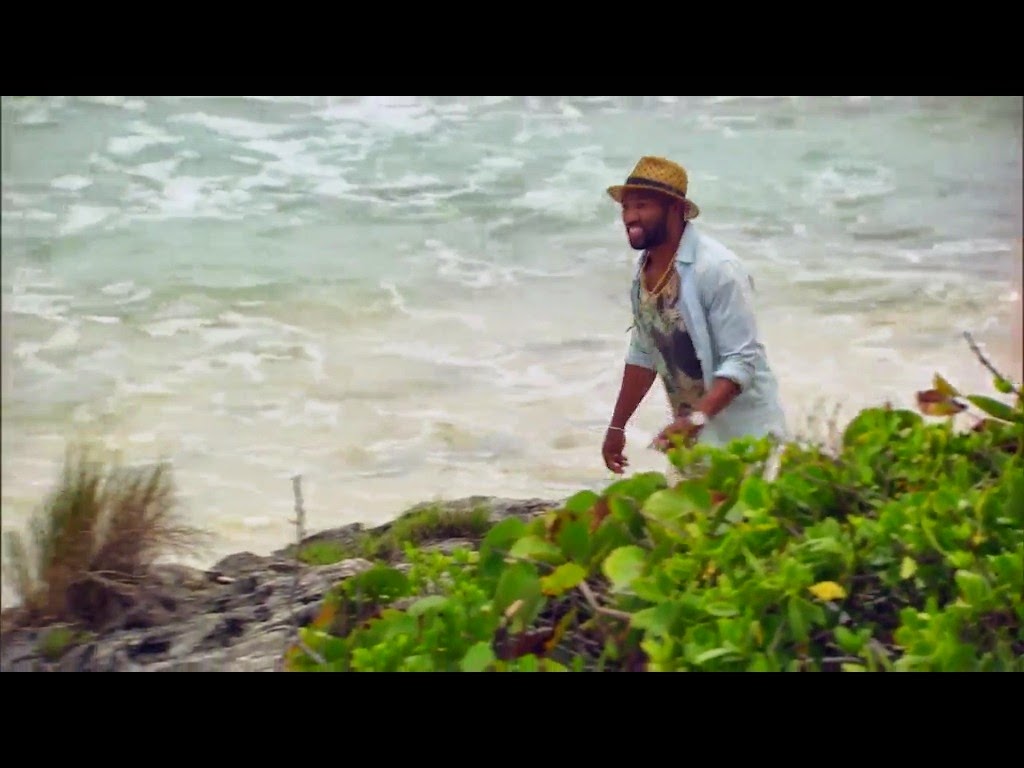 Daniella from Sean's season and a guy named Graham arrived.

I have no idea who he is but apparently amongst the Bachelor/Bachelorette folks he is a hot commodity. 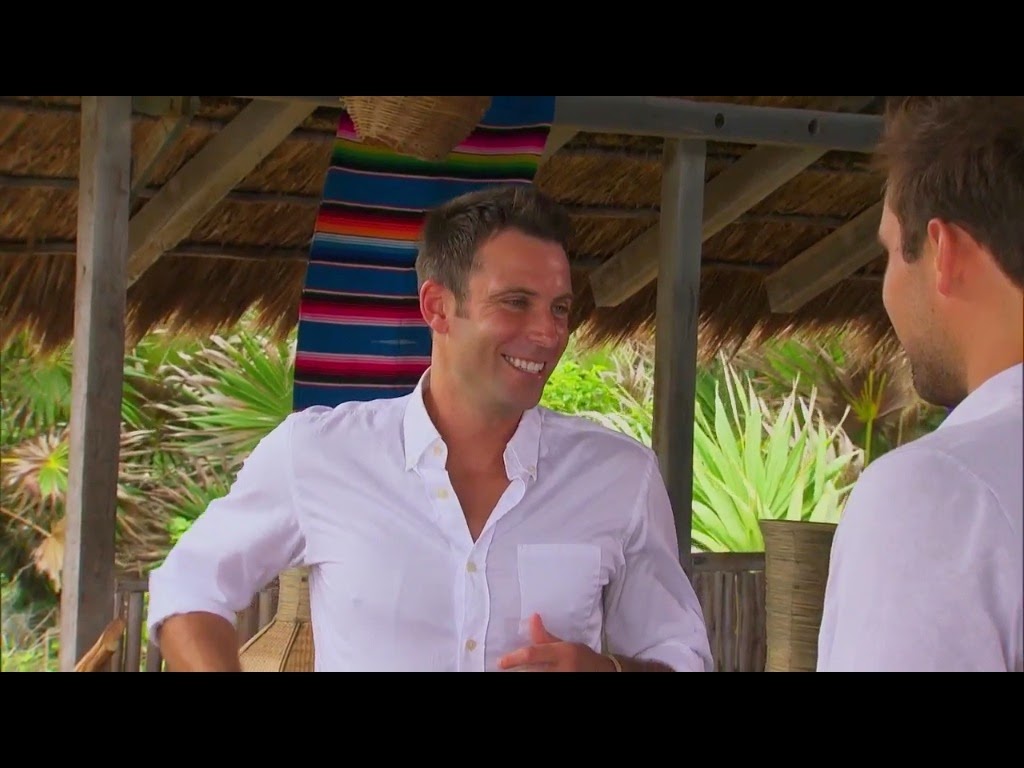 ABC's first attempt at Bachelor Barbie was proved a success when Lacey showed up. 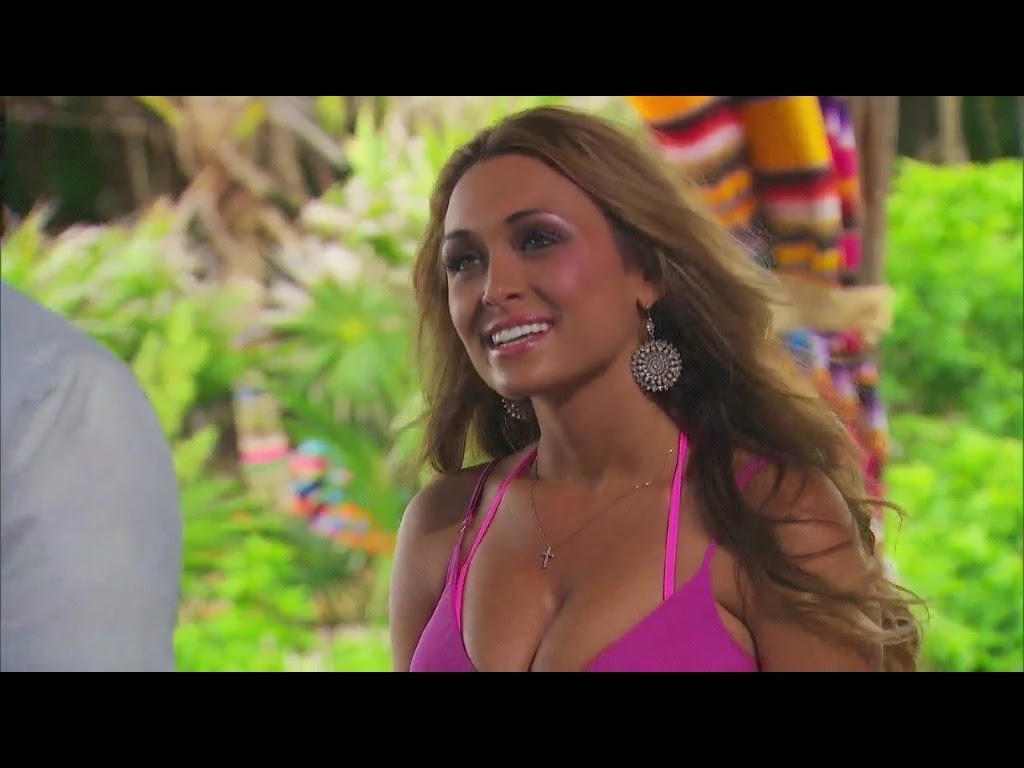 I couldn't remember when she went home on Juan Pablo's season but apparently it was early because Clare also had no recollection of who she was.

Evil Ben appeared in a cloud of smoke.
I'm half expecting his son to be living in a tree house somewhere, for him to use if he was feeling really desperate for attention.
Fingers crossed. 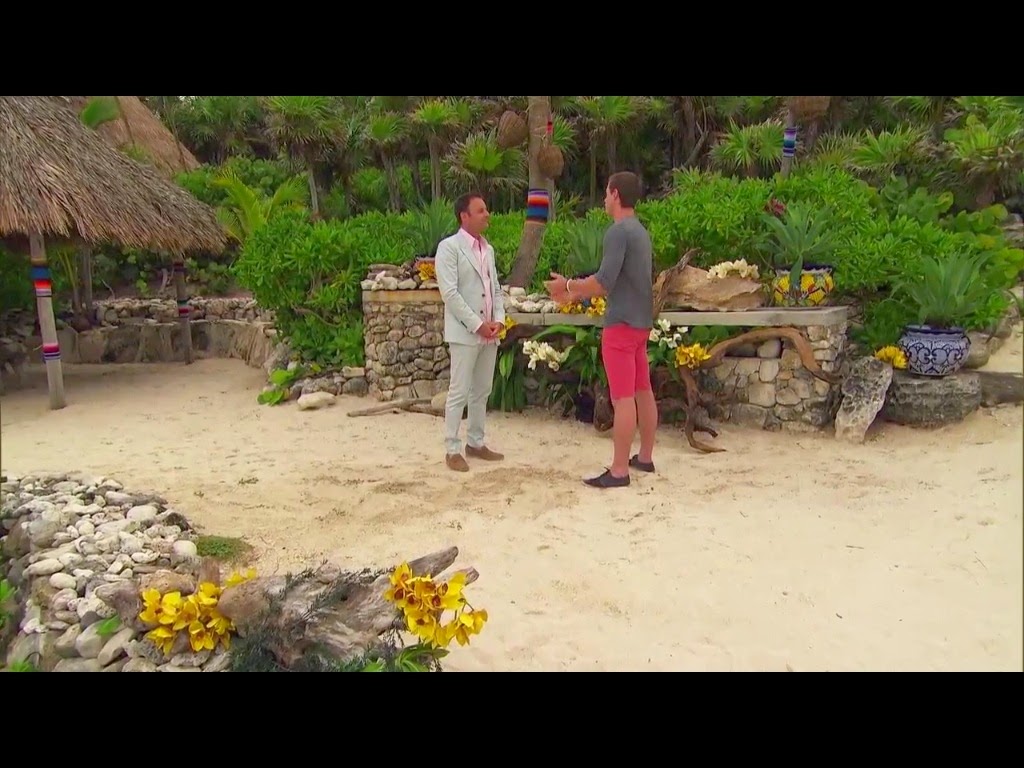 Then there was Michelle from Jake's season.
I vaguely remember her leaving in a huff during a group date, and being extremely uncomfortable to watch. 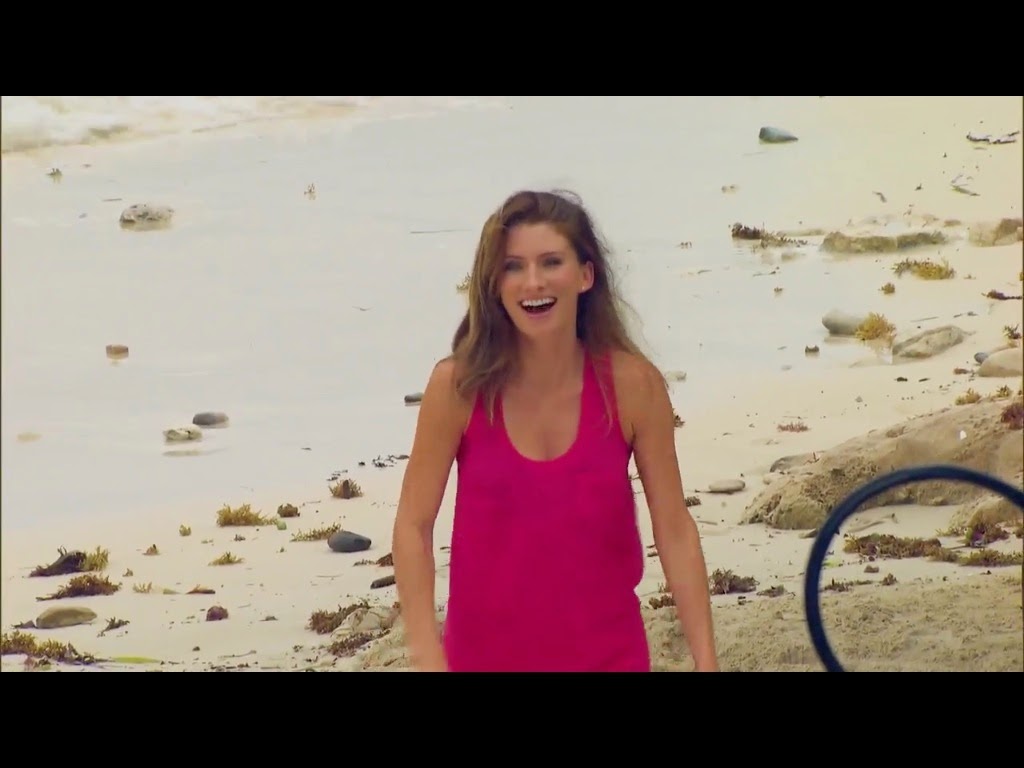 When Dylan walked toward the house, Marquel ran to greet him and jumped in his arms.
So I'm immediately rooting for them as a couple, because it was adorable. 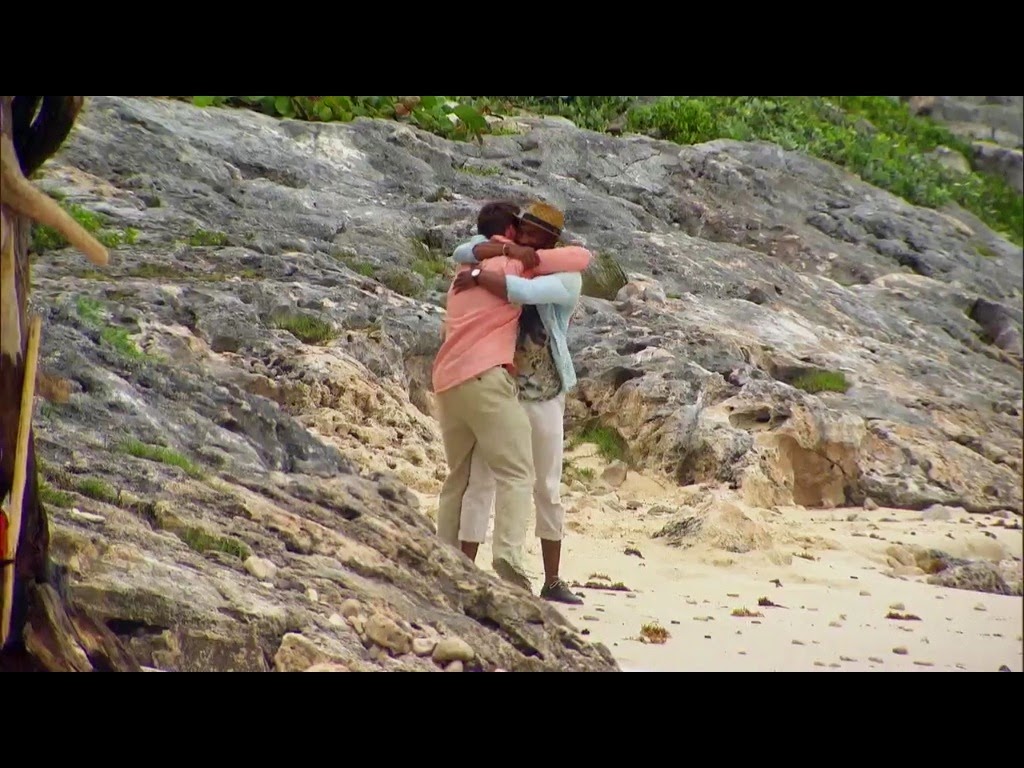 Elise slide down the stairs like my niece did when she was 1, because stairs in heels are hard. 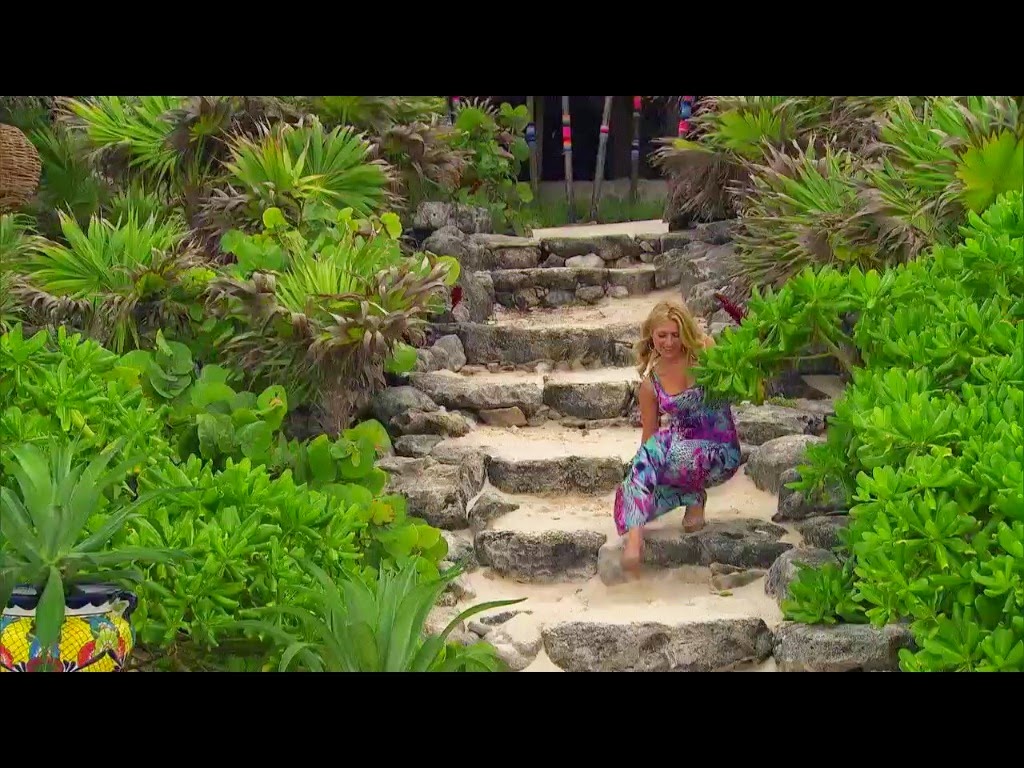 I have a feeling math, remembering to brush her teeth, and how to open a Capri Sun is a challenge as well.

Ashlee descended on Mexico with her eyes turned all the way up to crazy.
As she walked towards the house she said that she was hoping that Graham was there specifically.
So naturally I began to fear for Graham's life. 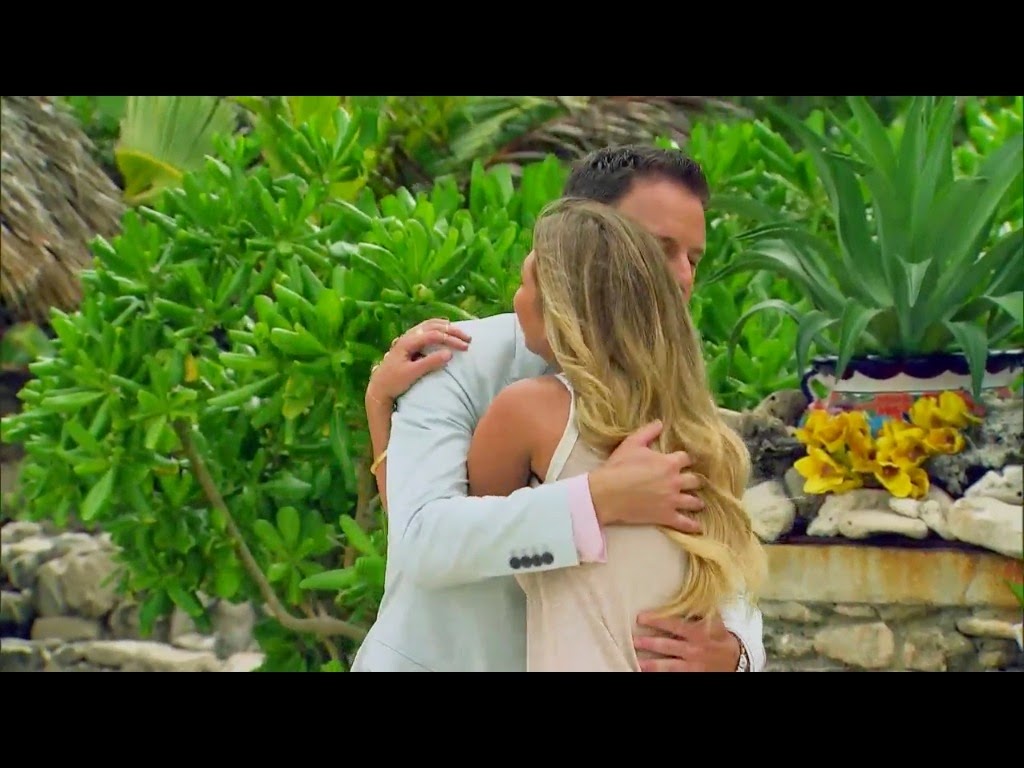 Minty Fresh Harrison came to explain that each week there would be a rose ceremony.
Currently there were more boys than girls so it would be a male week to give out the roses.
But the ladies should have no fear, because next week they were to be in control of the floral arrangements. 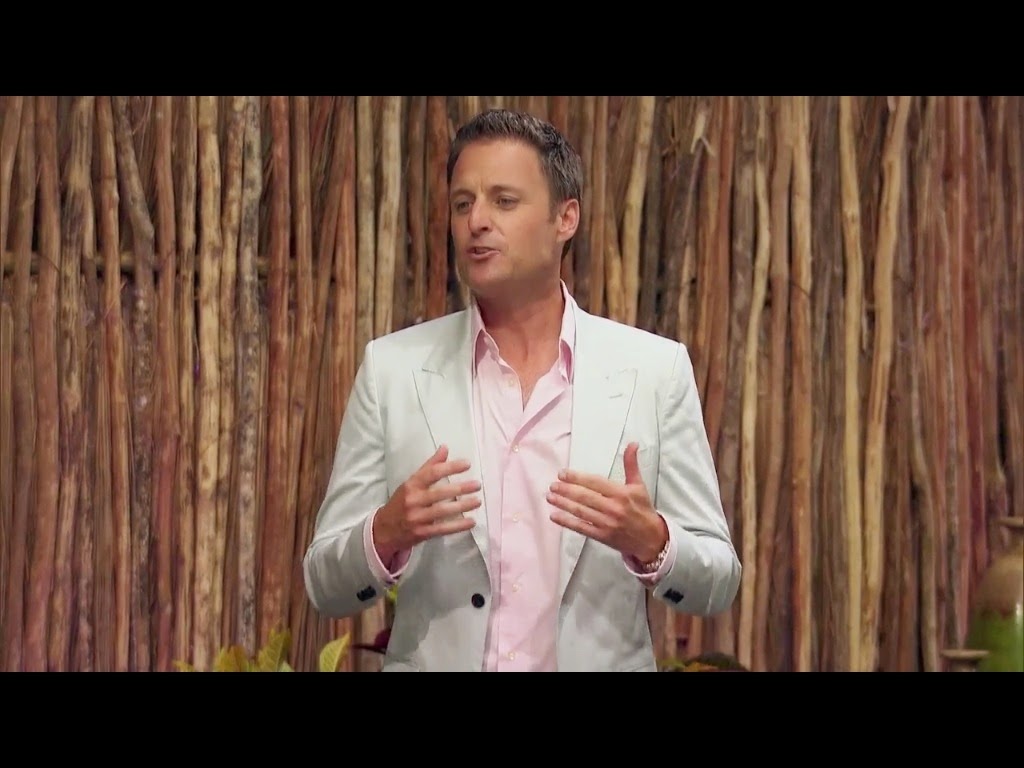 With that Chris said that if you weren't apart of a couple, you would be at risk to go home.
Lacey took that information very seriously and immediately hopped in the water with Robert or as I called him Gale from Emily's season.

Is it just me or do you also assume that anytime a couple is the water they are doing some kind of something?

Later in the evening, Marcus, not getting the attention he was hoping for, wandered into the ocean to mourn his relationship with Andi...
In his orange boxer briefs.
Because: Mexico. 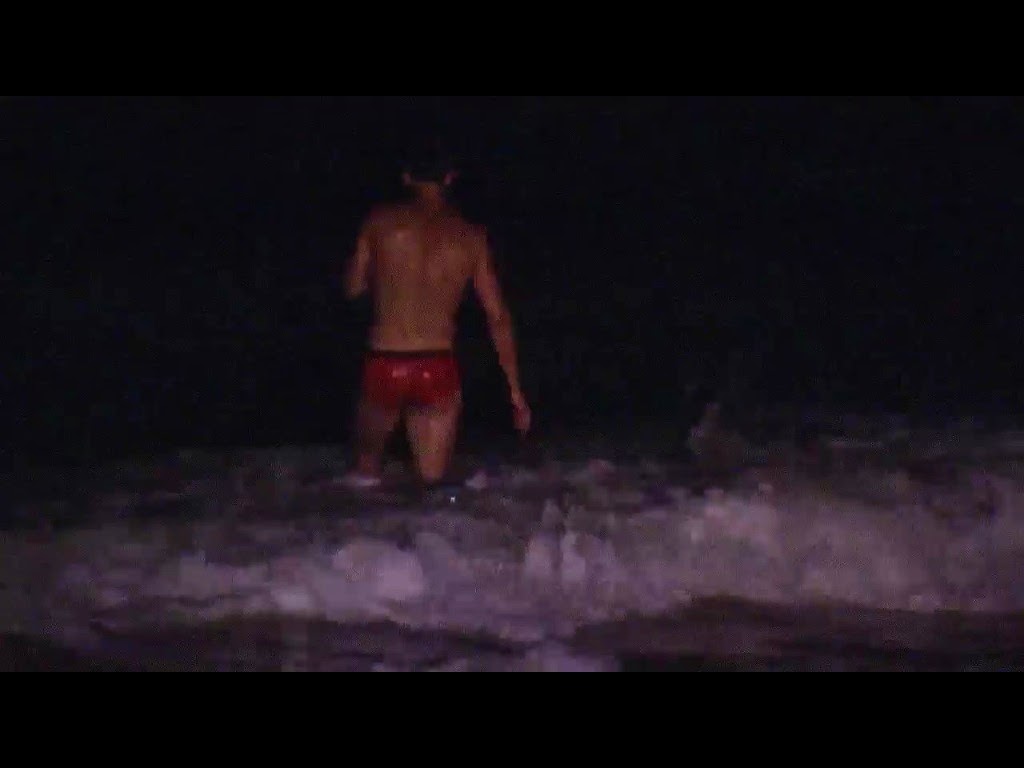 Seeing Marcus in his vulnerable state, Lacey decided she also liked him.
Meanwhile Gale stated that he's liked Lacey from the moment he met her.
So for anyone else trying to do the math: a whole 8 hours.

The following day Ashlee informed us that she had been following Graham on social media...and around his house, for awhile and felt like they were meant to be together. 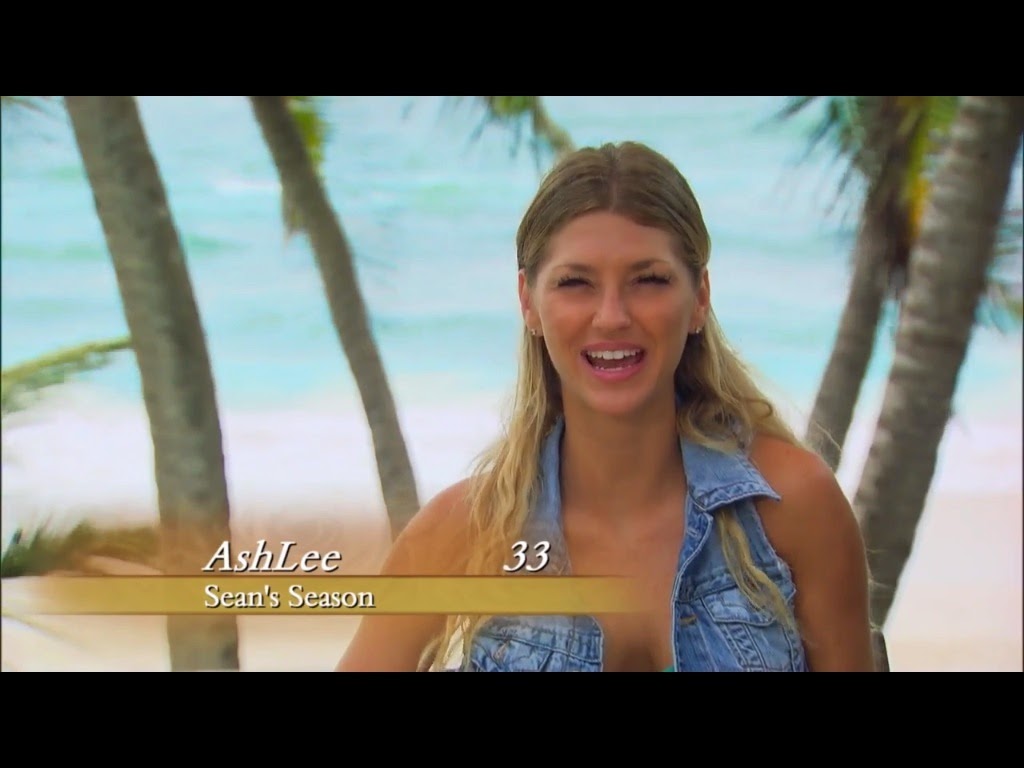 They took a walk, and she told him no less than 3 times how glad she was that he was there.
His response: Thank you.
Cupid's Arrow is lodged into Graham y'all.

Ashlee said she was trying to play it cool around him and
"be flirty and cute, and not love all over him," but didn't want to see too enthusiastic.
Nailed it, girl. Nailed it.

Back at the hut, Clare received the first date card.
She decided to ask Graham on the first date, and Ashlee took things really well. 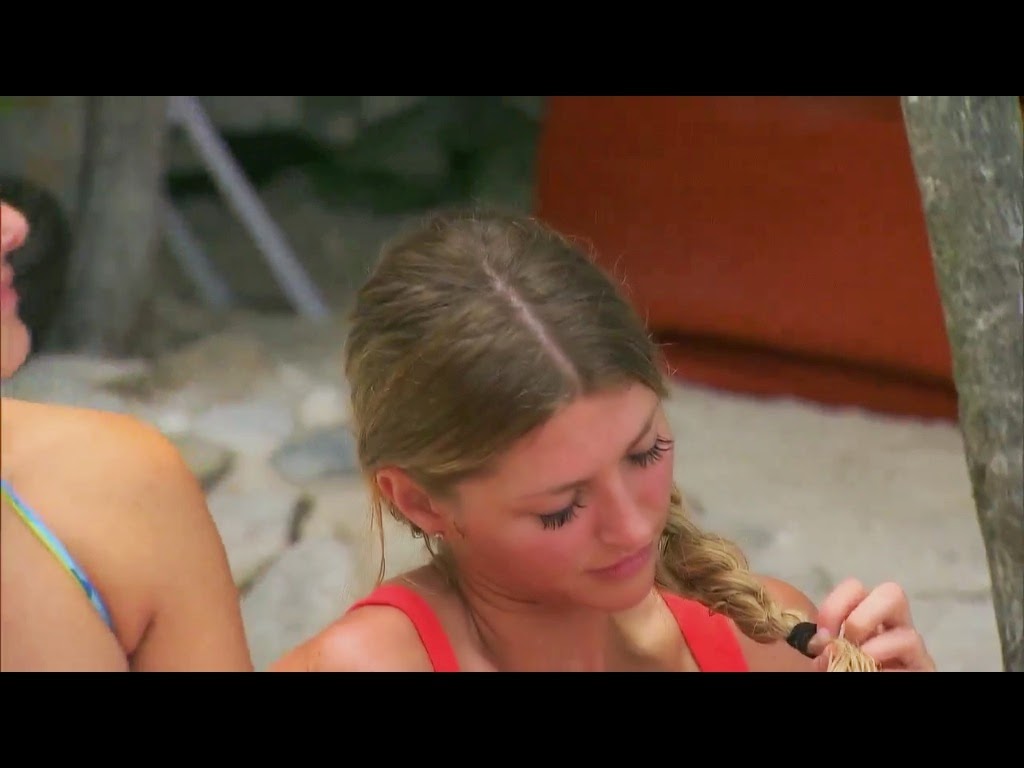 She got up.
Started crying.
Called Clare a slut. 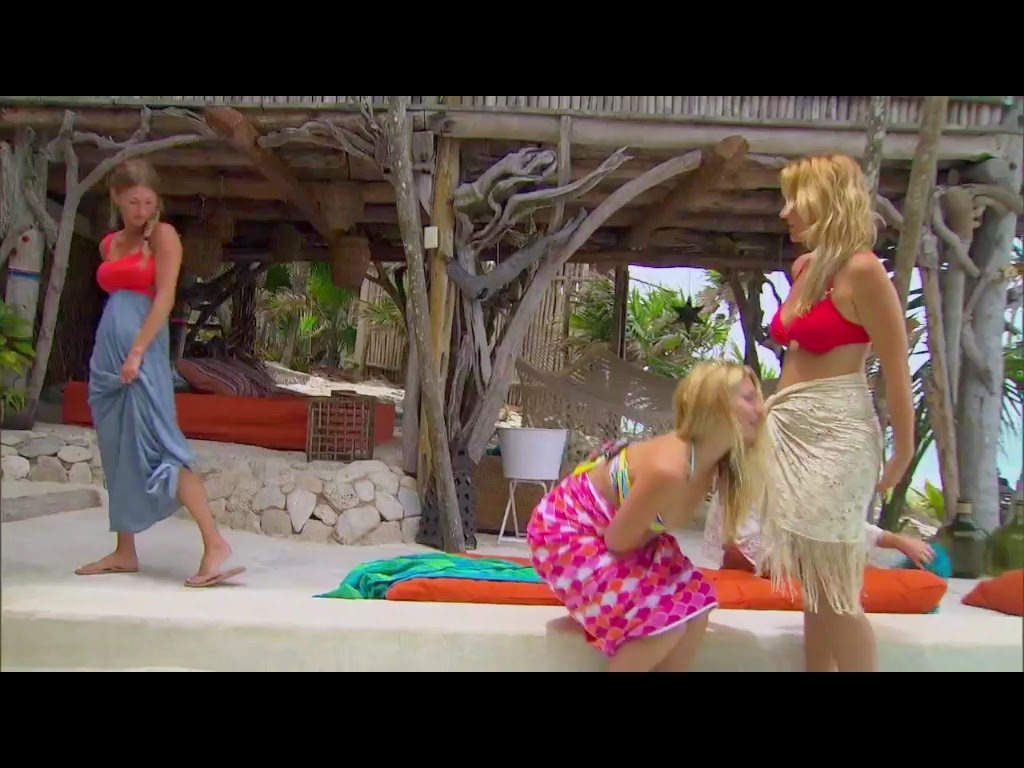 Went into her room and started talking to, who, you may ask?
Oh, just herself.
She said things like,
"I can't even trust him for 24 hours."
"I'm the only other normal one here besides him."
and: 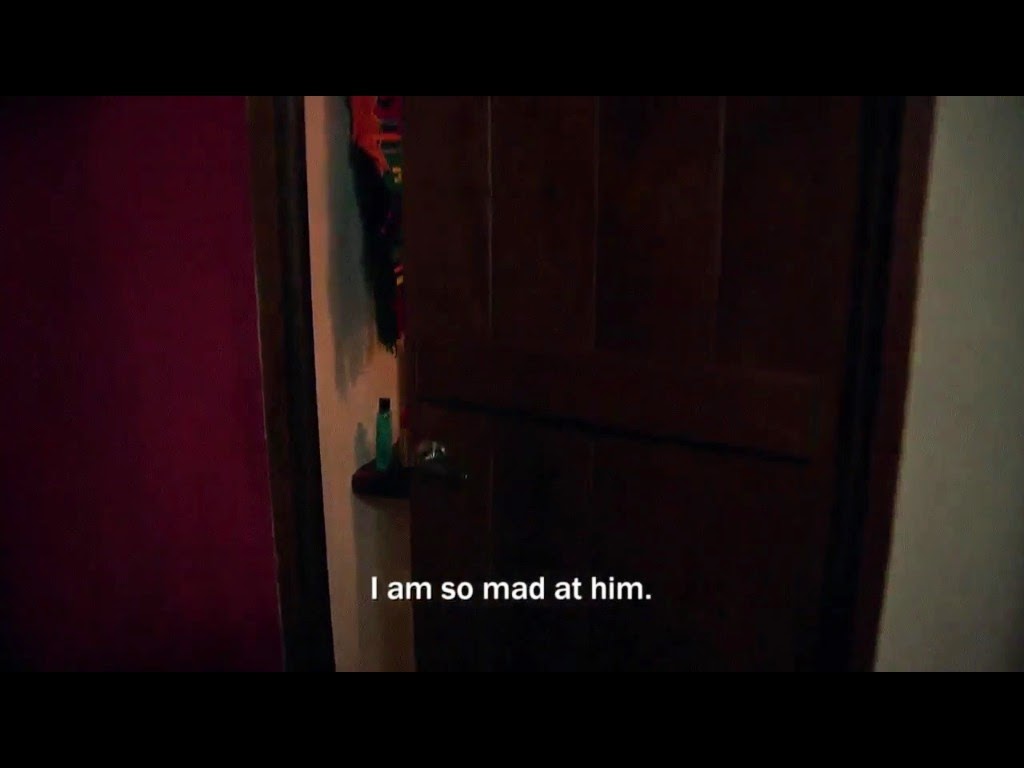 Daniella said it best:
If Ashlee things someone is semi-cool, she thinks they're going to get married.
She also mentioned that if she was thinking about Graham, she wasn't anymore, because she didn't want to get murdered in her sleep.

Meanwhile out on the porch, Rachel Raycoon, sensed an in depth interview opportunity and made her way to the steps to talk to Clare.


Y'ALL CLARE HAD A CONVERSATION WITH A RACCOON.
LIKE YELLING TO A RACCOON ABOUT ASHLEE.
ON THE FRONT PORCH OF THEIR HOUSE.
I'M DEAD.
dead.
This is me as a ghost in heaven typing a blog post.

Clare, fully refreshed and empowered after her conversation with the raccoon decided to ask Ashlee to talk.
Ashlee used her witch craft to not only have Clare cancel her date with Graham but also give her the master bedroom, Clare asked Gale to go on a date with her instead. 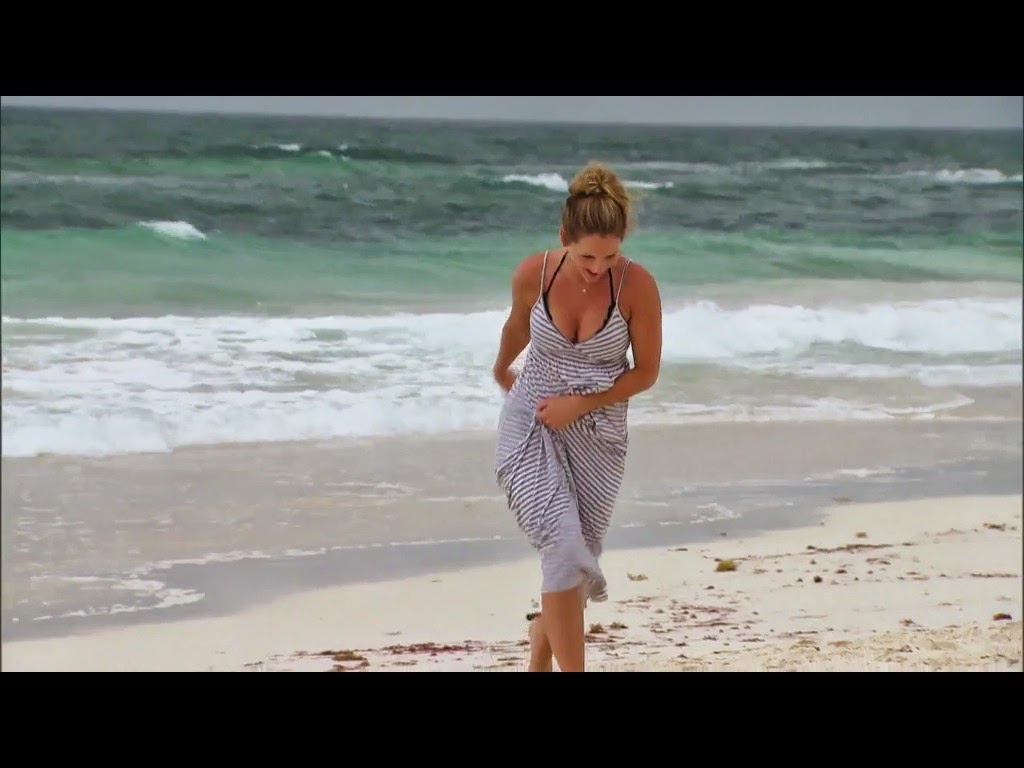 Graham, wearing his best pooka shells was very confused as to why Ashlee was upset. 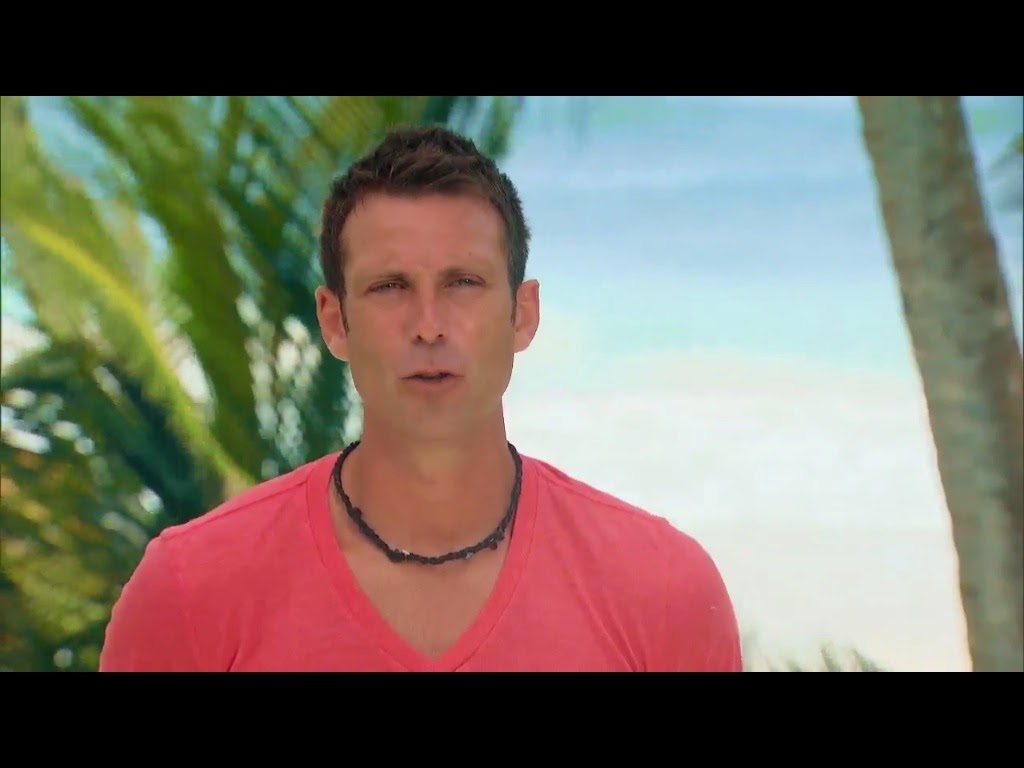 When he attempted to reach out to her, she said that she wasn't ready, and would talk to him another time.
Totally normal behavior for a 33 year old woman. 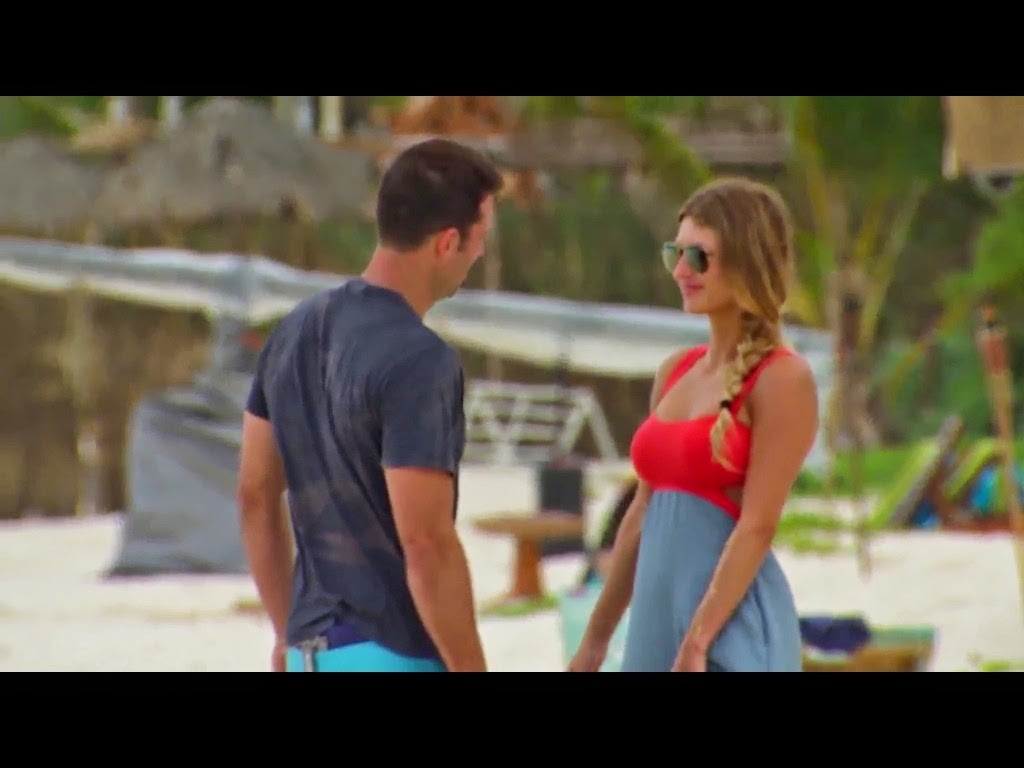 Clare went on her date to the ruins, which some might says was already RUINED by Ashlee. 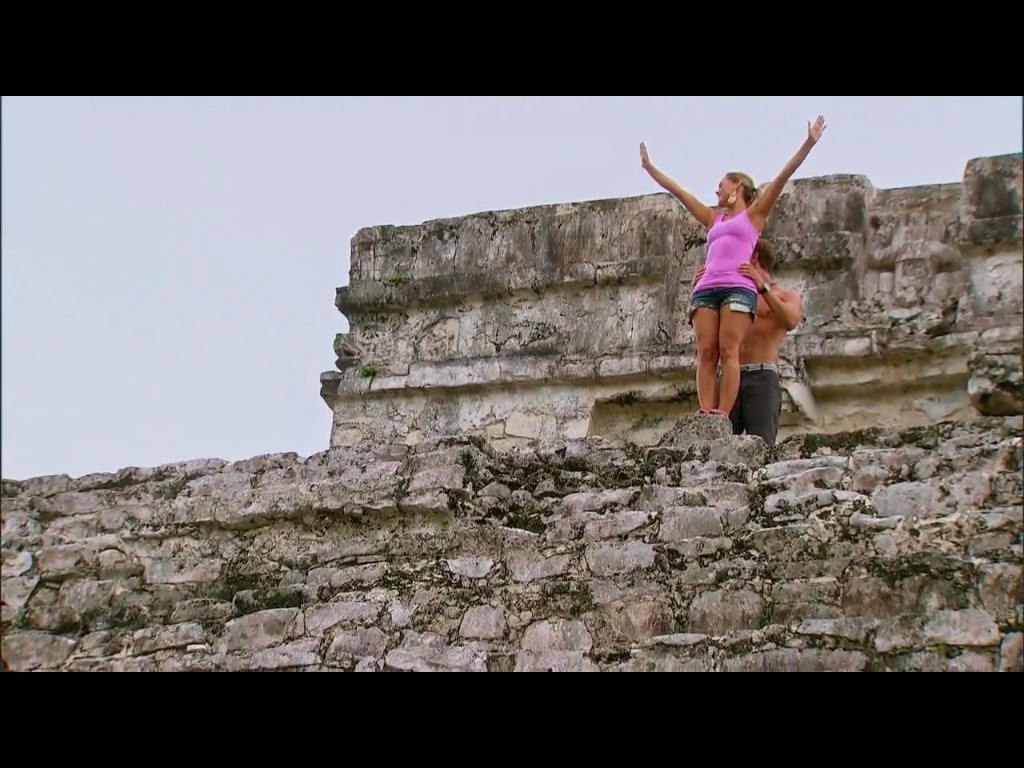 It was boring and everyone snored.

Marcus, still devastated about Andi, took himself back to the ocean where he hoped the tides would float him to the new love of his life via boogie board. 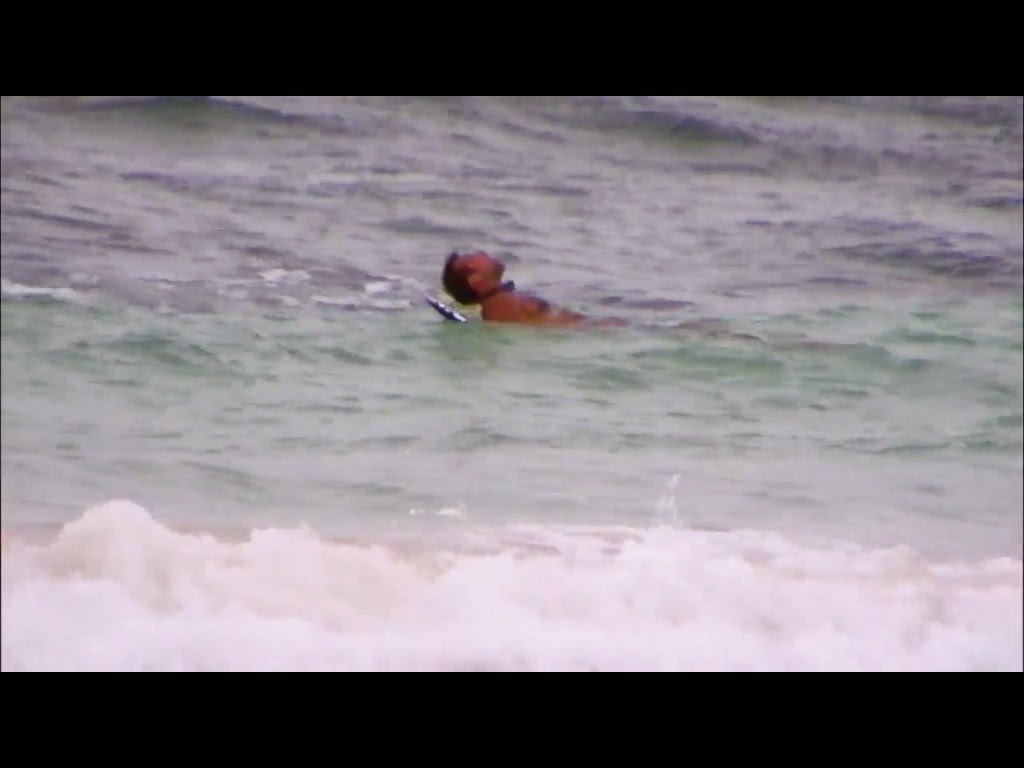 Instead Lacey went out there and tried to make it really apparent she was here to party.
Or she was confused that the men on the island were like Pokemon and she needed to catch them all.
Sarah got the second date card and asked Marcus.
She rocked a killer one piece, and really tried to be forward in how she felt, without being well...Lacey about it. 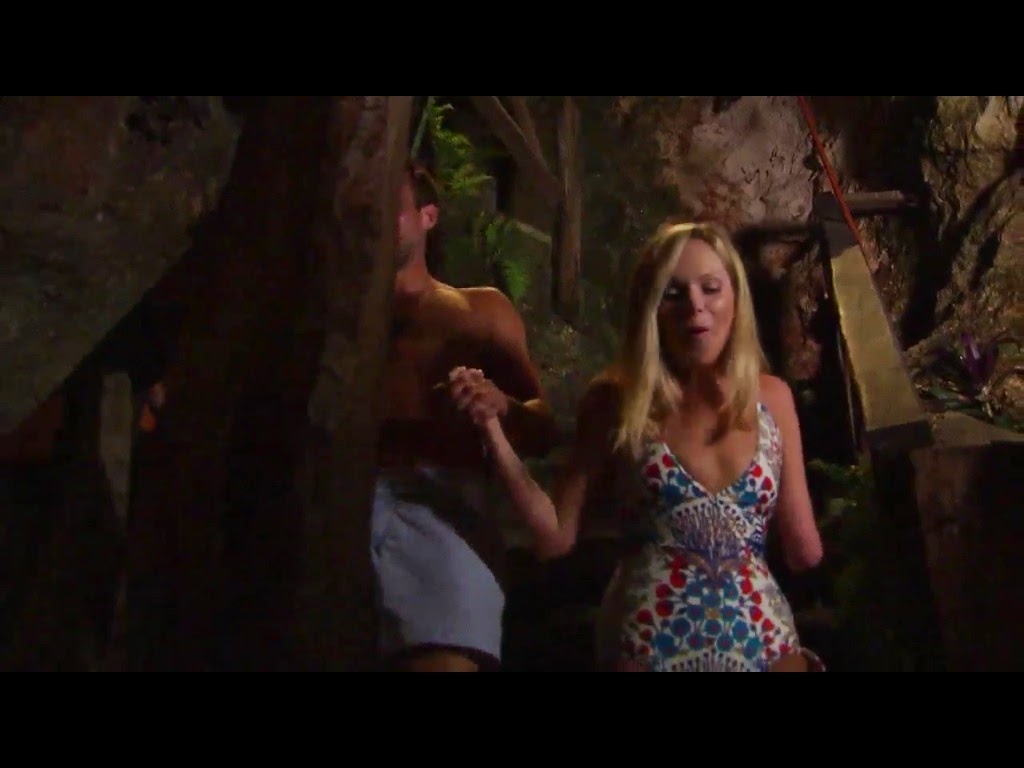 The date was also lame, because all Marcus talked about in the interviews was Lacey.
After the date it was pretty clear that Marcus sucked big time and that Sarah was pretty presh.
I just wish she would stop making herself seem like Josie Grossie.
She's so nice and sweet.
She needs to own it.

At some point Lacey and Gale went on a date and it seemed like a sure thing that they were going to be coupled up. 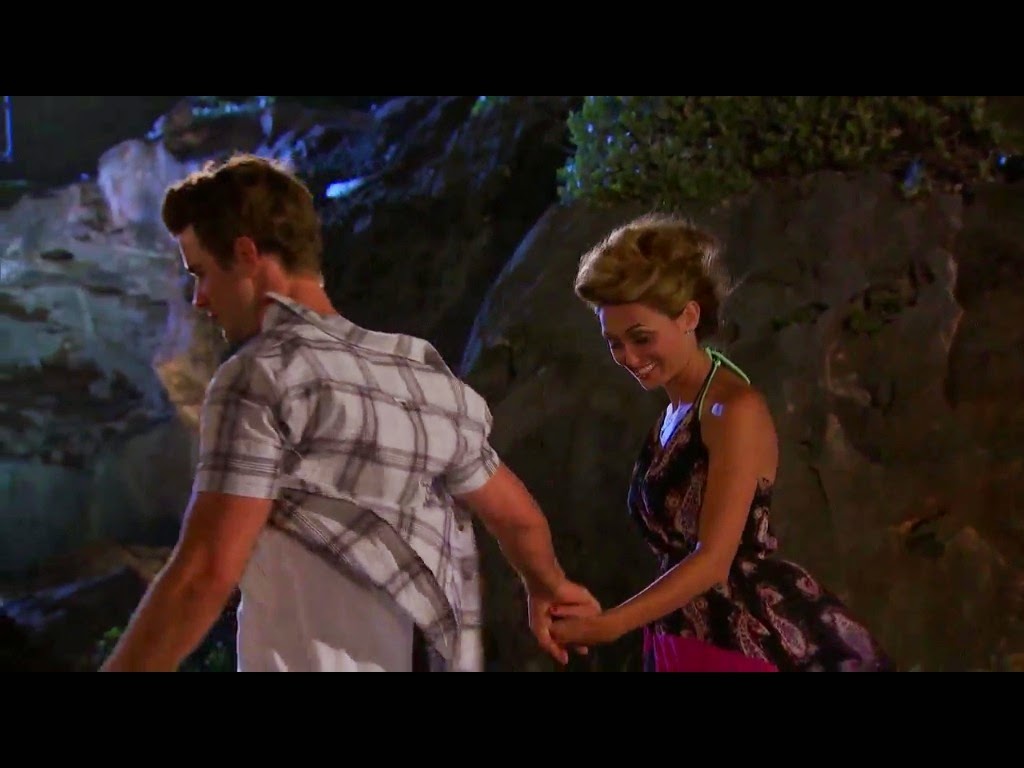 Later, as Marquel and Dylan tried to convince Marcus he didn't have a shot with Lace face, another lady arrived.

Michelle from Brad's season.
I don't know that season, but I do know that I don't hate her.
She helped us out with the Bachelor fiasco during the finale so she is a friend of mine. 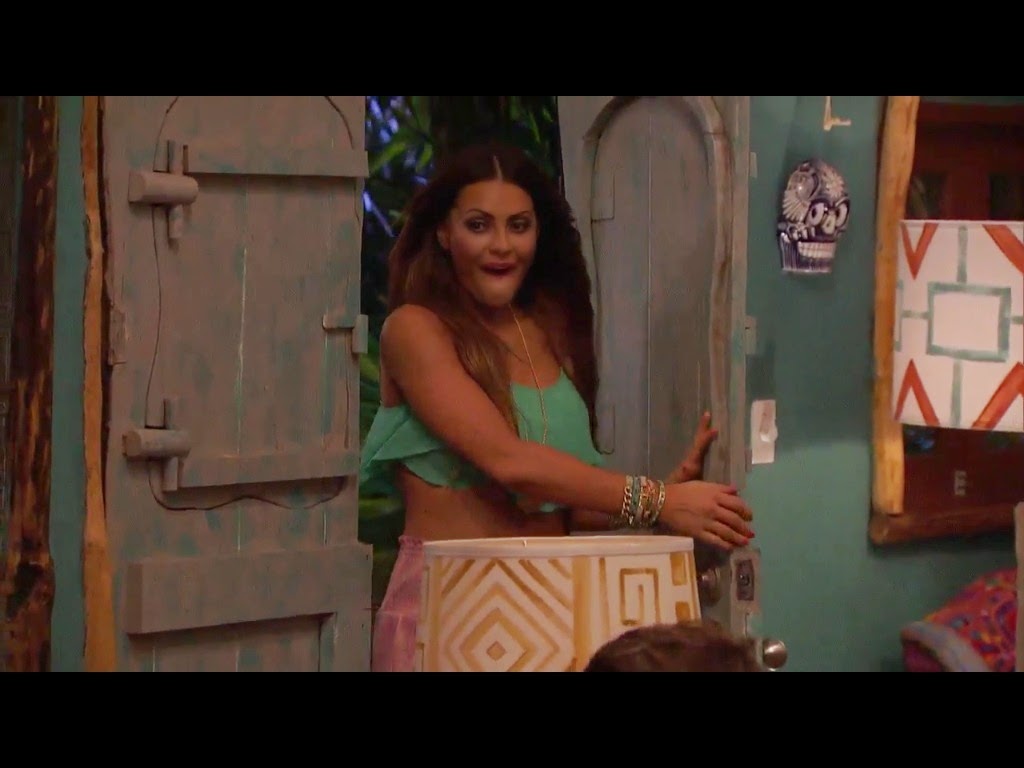 And also a real good friend to Graham.

Which created a fire in Ashlee's eyes yet again.
The next day she decided to pull Graham aside and finally talk to him about his unforgivable sin. 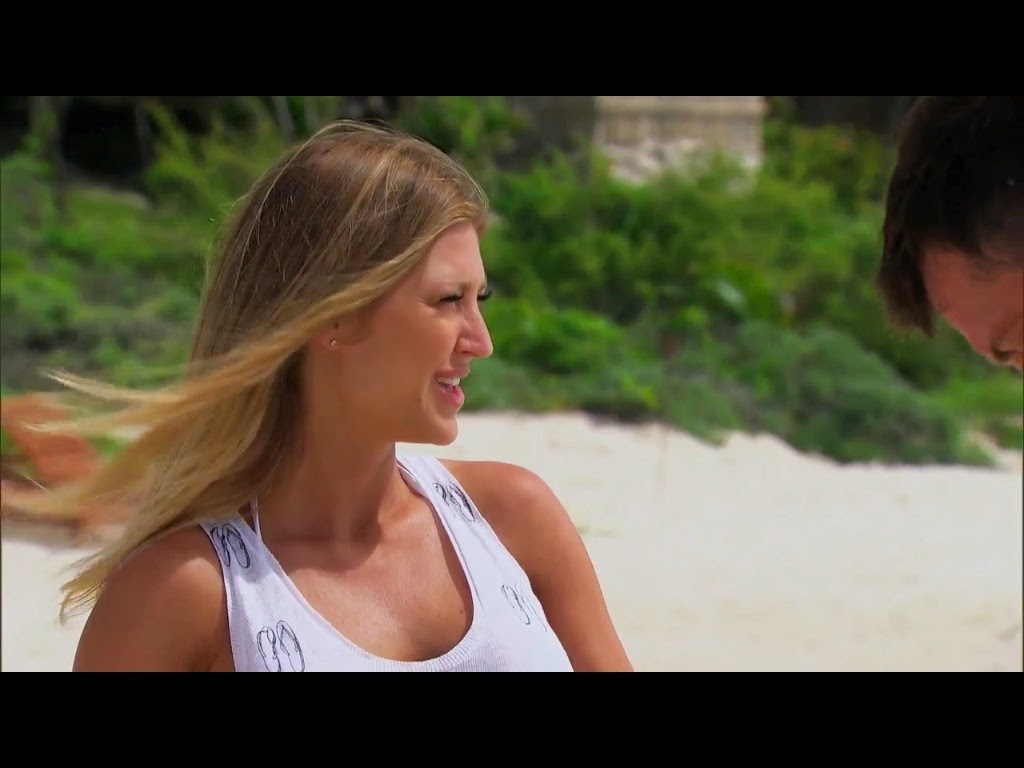 She apologized for how she acted and wanted him to know that she was still interested.
Graham, not wanting to create a situation where Ursula Ashlee dragged him back into the sea with her eels and potions, said it was OK, but that he thrived on communication.

Michelle and Marquel went on a date, which was sweet.
I dig them as a couple. 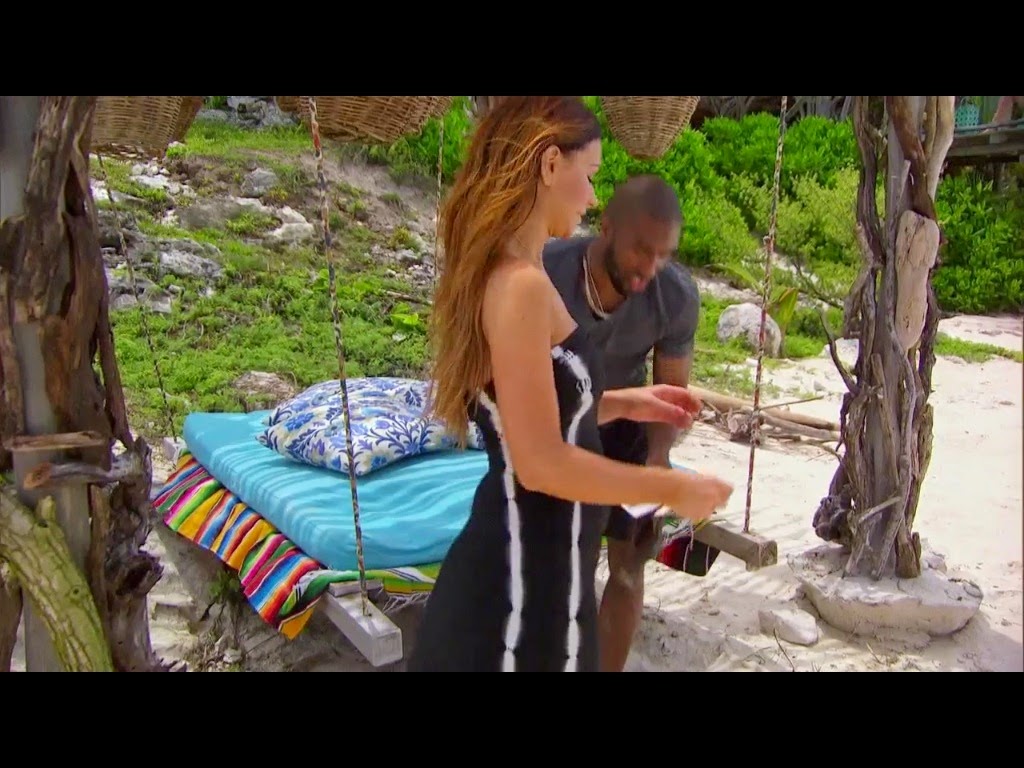 After all of that, it was finally time for the cocktail party and rose ceremony.
During the cocktail party there was a thunderstorm that I'm assuming Ashlee summoned with her hatred for any woman who thought about Graham or graham crackers for that matter.

During the rose ceremony, Ben knew he didn't have a great connection with anyone and that his vote was a wildcard.
He talked to a couple different people, but told Sarah that he really felt like she deserved to be there. 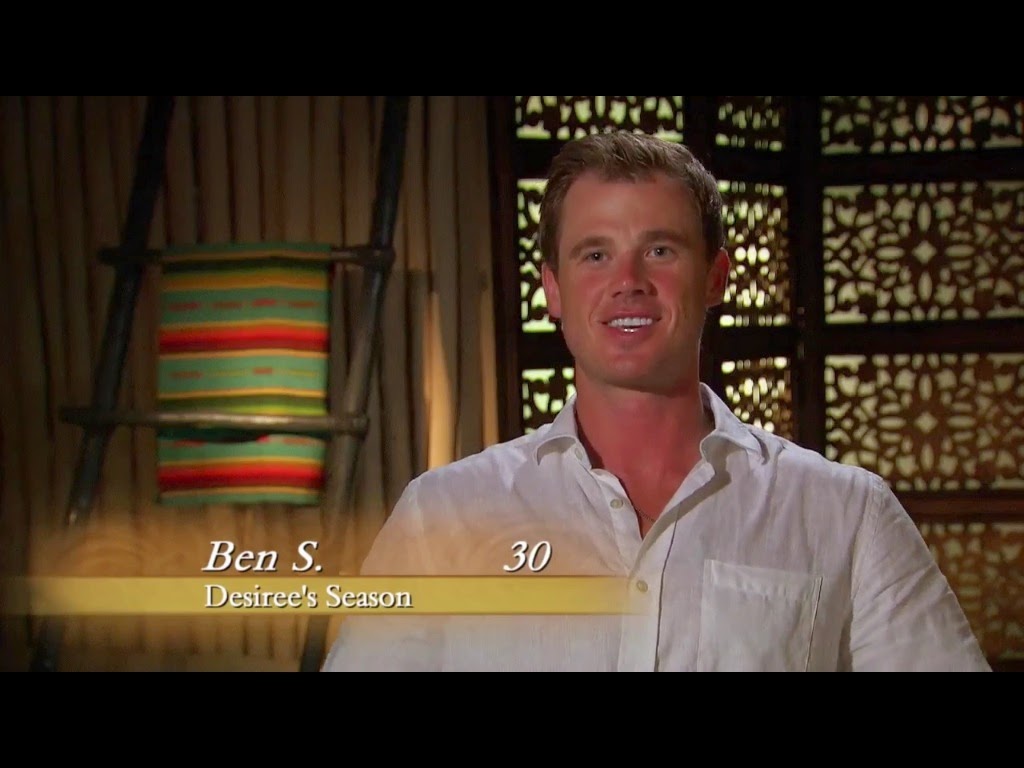 Unsure of where she stood, Sarah asked Marcus what he was thinking.
He said that she was cool, and that she should be there but he had feelings for Lacey.

He said that he would like to give Lacey the rose, but was probably going to give it to Sarah.
Sarah felt better about that, and went on about her evening.

Clare was talking to people about how she was calling Mexico, Claradise.

Lacey told us that she was 80/40 about her feelings for Marcus and Gale.

Ben was getting drunk.

And then the clink of the glass let us know it was time to begin.

Michelle excused herself from the show, because she didn't have a connection with anyone.
Also because she knew she was going home. 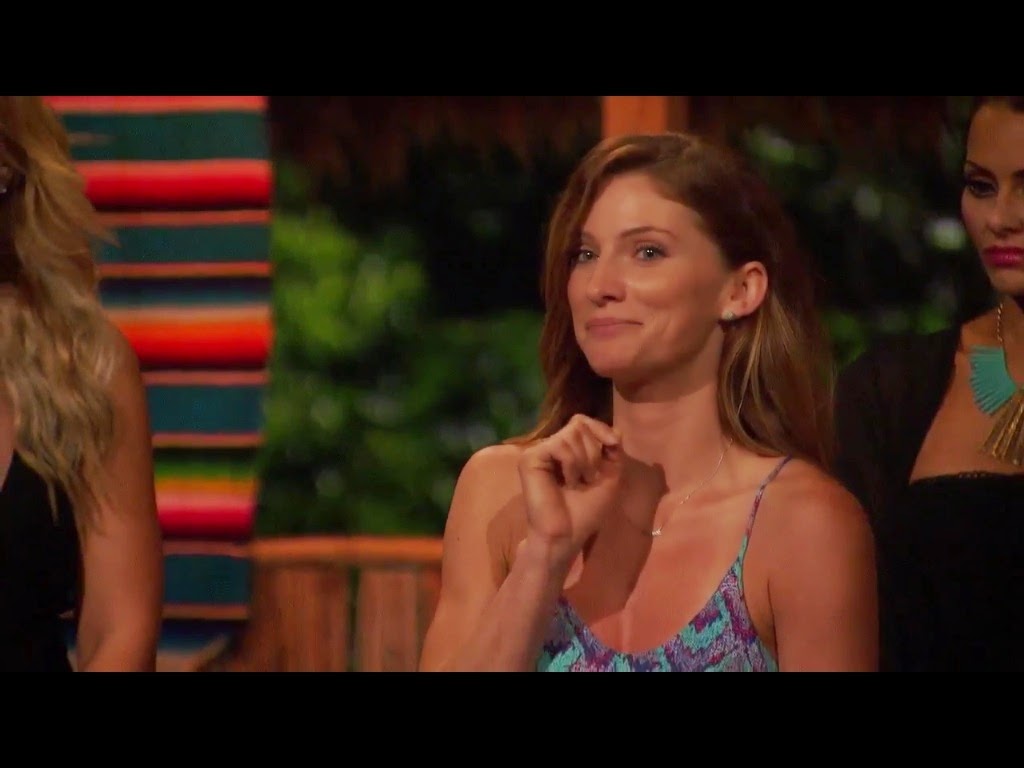 Apparently we learn more about why she really left next week, and I'm so excited.
And disgusted with myself, because I'm excited.

Marquel picked the other Michelle.
Graham picked Ashlee (or else)
Dylan picked Elise

Then Marcus was up and HE PICKED LACEY.
Even though he told Sarah she was a sure thing.

And after everyone told him Gale was going to give Laceface the rose!
What an a--hole.
I literally gasped and said,
"Poor Sarah."

Which left Ben.
He seemed to be vibing off Daniella, so I was convinced that he too was going to leave Sarah in the dust.
But he didn't!
He totally gave Sarah the rose!!!! 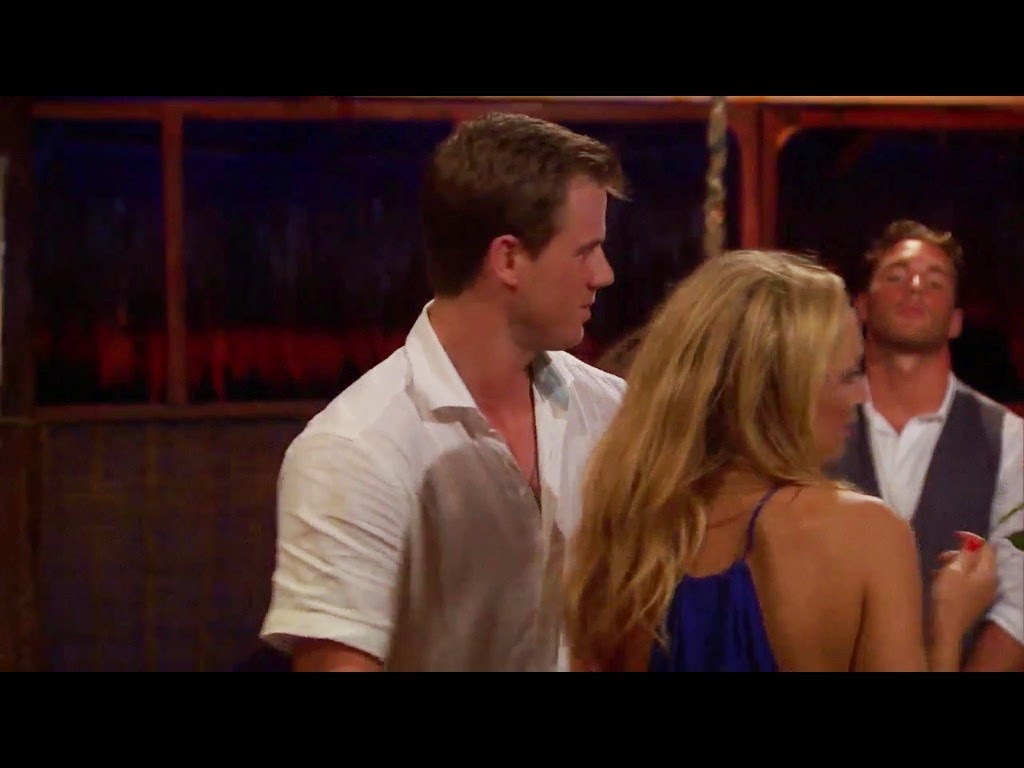 Who knew he had it in him to not be the worst?

The best part is that next week looks even better.
There are so many people and so many dates, I'm going to have to do a better job of explaining them so they aren't a jumbled mess, but boy do I love this incarnation of the Bachelor.

What were your thoughts?
Did that raccoon have rabies?
Did it give Claradise good advice?
Is Marcus the sleaziest person alive?