Well, the finale, or as I called it, the "Waiting for Whitney to Win" episode, came and went.
Chris Harrison let us know that shit was about to go down.
In fact he told us to buckle up.
I was like dang this going to be a bumpy ride.
Turns out it was a "click it or ticket" type statement because it was real bland trip to Iowa.
Chris walked through the snow pondering life's choices in shoes that people wear to work on Wall Street.
Whitney met the family first, and Chris greeted her standing in his driveway like Robocop. 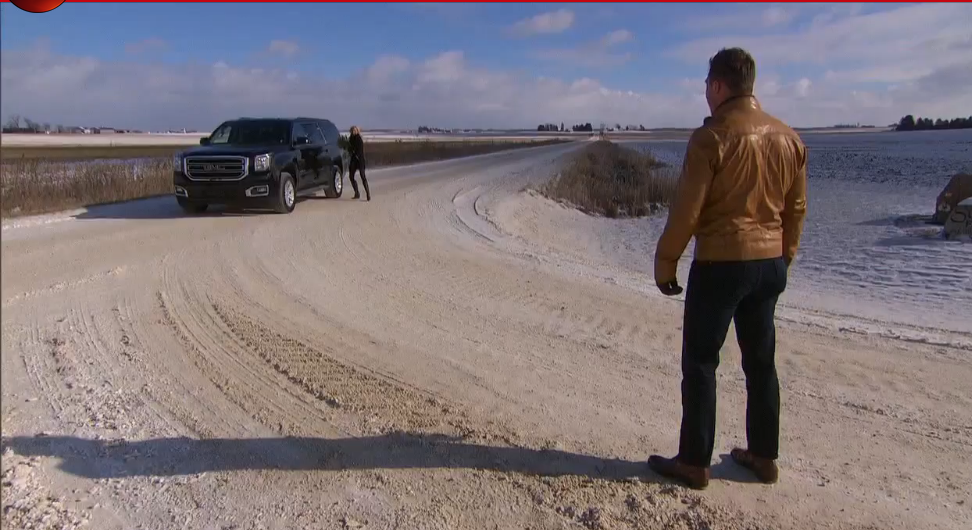 Whitney then started her campaign....I mean date by letting Chris know how much she loved him before they walked in the door, and then every step they took after that.

I don't know if the family bought stock in Whitney's fertility clinic or what but Jesus all she had to do was walk in the door and they were throwing their underwear at her.
Except for the dog.
He gave zero f's. 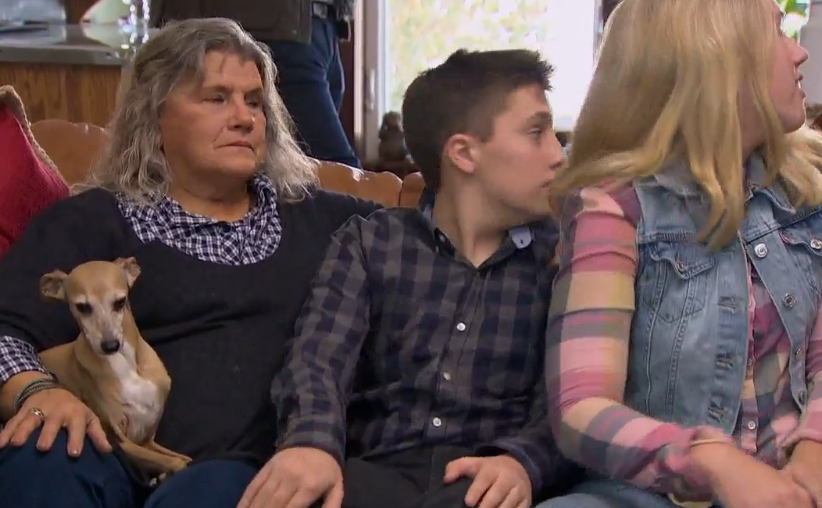 Whitney ended up giving the LOOOOONGEST speech ever about how badly she wanted a family and couldn't wait to call people "mom" and "dad" again.

At one point, I wasn't sure if she was attempting to become Chris's wife or his sister.

As the entire family starting making "Whitney is the Best" buttons,
Chris had to tell them that there was still one more girl coming to the house, and that they would like her a lot.
The sisters arched their backs like angry cats and hissed until ABC was forced to go to a commercial. 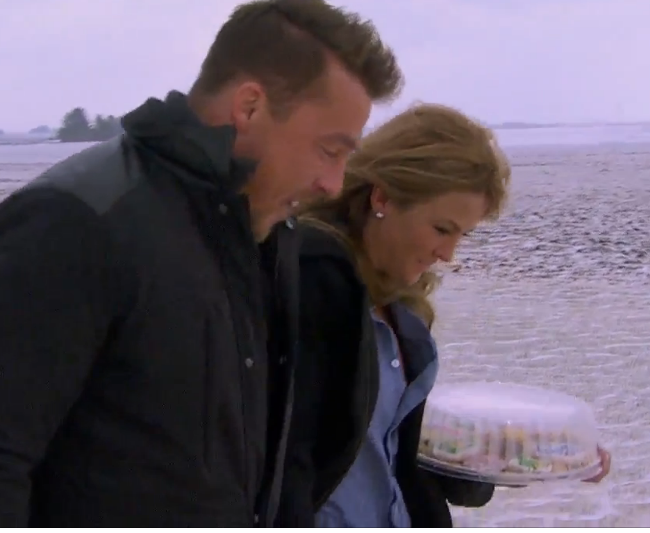 and immediately you could tell that the family was just being nice to her.

Although she was so personable with them, and told stories, instead of just reading off index cards about why she was the best fit for the position Chris's heart.

Later she talked to Chris's mom Linda, who turns out is a literal angel sent from heaven. 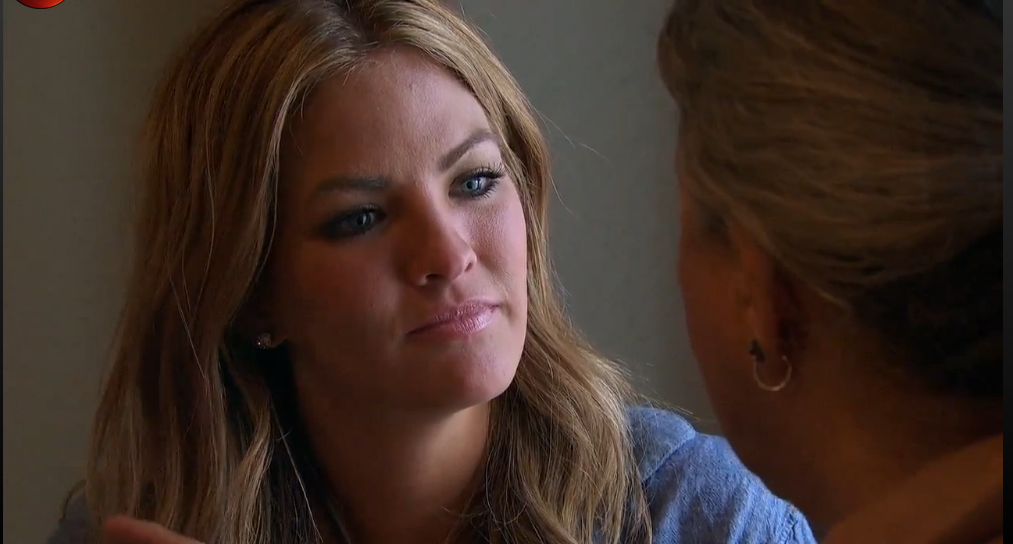 Becca tells her that she's never been in love before, and as Linda BRUSHES THE HAIR OUT OF BECCA'S FACE LIKE THE SWEETEST CARING WOMAN OF ALL TIME, she tells Becca it sounds like the feelings she have are love.
Linda was my beacon of light.

Perhaps she could beat it coax it out of Becca and make my dreams come true.

After they met the family, Becca and Whitney had "last chance" dates where they did Powerpoint presentations as to why they were the best choice, and then Mark Cuban offered them money...wait nope that's "Shark Tank"...how weird that I got the two shows confused.

Becca's last date had no effort whatsoever.
It was essentially them sitting in her hotel room, talking about feelings.
It was the saddest last date on planet Earth. 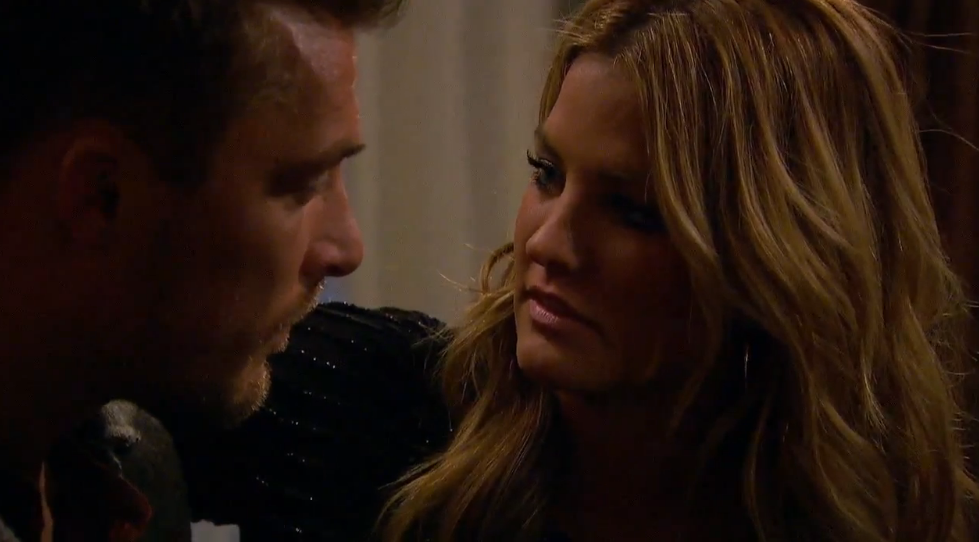 I think the hardest part was Chris asking her why she didn't feel in love with him.
I was hoping that she would just mouth "Olive Juice" which looks like "I love you" and that would have been a solid enough compromise.

But she couldn't make herself say it, and it made sense.
You've only know the dude for 2 months, and now you've gotta be cool with dropping everything and being 1000% in love.
That's gotta be stressful, when you're a normal, funny, delightful human being.
(It's been a week and I'm not over it...I'm sorry.)

Meanwhile Whitney's last chance date was on the farm.
The MOMENT Whitney got out of the car she started talking about how at home she felt. 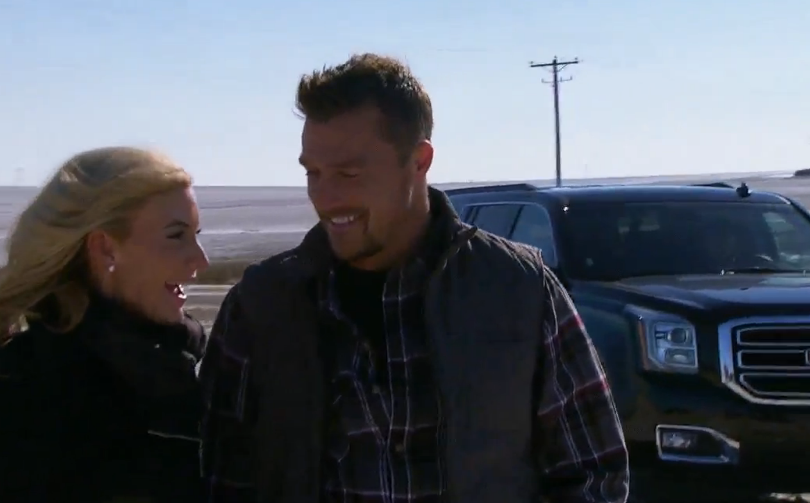 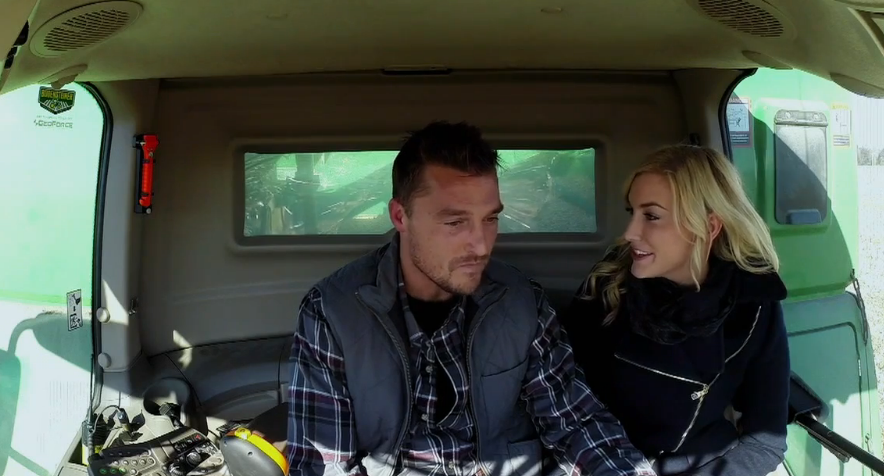 He showed her the basement that he keeps drifters and hitch hikers that he's kidnapped in, and she loved it.

He could have shown her his super cool Dungeon and Dragons figurines and she would have pulled out some that she widdled out of bars of soap from the hotel bathroom.
Literally everything he said or did she was 100% about.

At the end of that date it was clear who the winner was and I was i.r.r.i.t.a.t.e.d.

The final rose ceremony was in the barn that Chris raised his first pig. 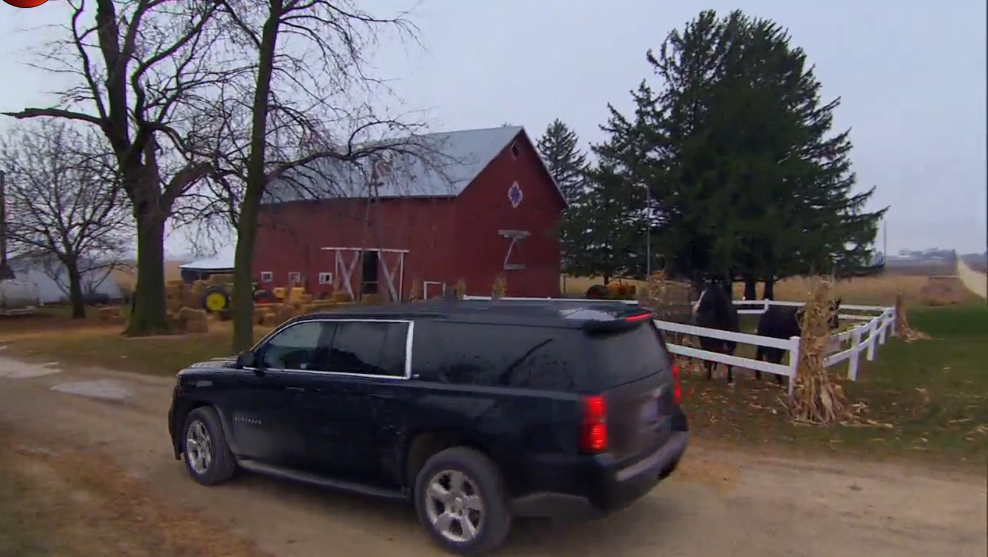 I was hoping so hard that his pig would be there, and that he would have coaxed his spider friend to write "Will you marry me?" in a web above the barn, but nope, nothing.
My dreams continued to be crushed when Becca was the first to show up and get dumped.
She was so great about it and said she understood.
She told him that he was the reason why she was able to come out of her shell and she thanked him.
SHE THANKED HIM. 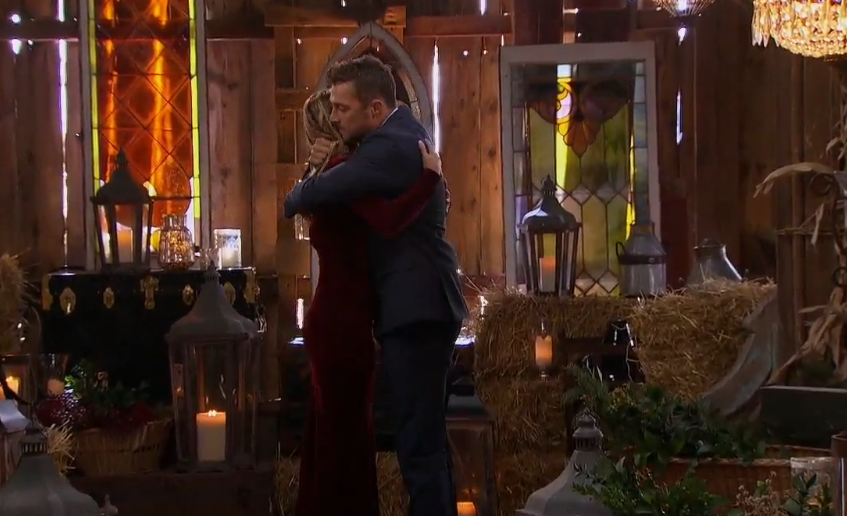 Chris said he was devastated.
I then literally yelled at my computer, "YOU'RE DEVASTATED? I'M DEVASTATED, CHRIS."

(Side note: how long do you think it took them to make that barn look like that/did they install that stained glass window specifically for this event?)

Becca was pretty robot like in the care, but all in all took it like a champ.

Whitney showed up and if she would have barfed, I wouldn't have been surprised.
She was shaking so hard,  and blinking so much.
When she talked it sounded like she was in a car going down a cobble stone road.
Chris said a bunch of lame stuff, and ended with
"I love you?"
Then he got down on one knee and proposed. 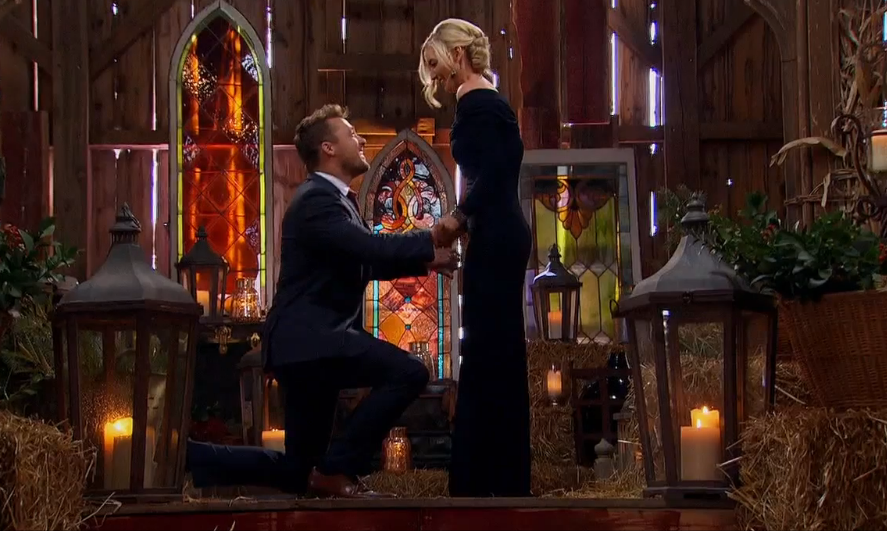 Whitney, although, pleased that Chris picked out a ring, pulled out one that she had already purchased for herself, and put it on her own finger.

Whatever.
Love is great.

During the "After the Rose" ceremony, Chris Harrison tried to make Chris Soules tell everyone he wasn't over Becca.
When that didn't work, he said things like,
"Becca was a lost cause," and "Becca couldn't feel love."
Still no reaction from Chris.

When Becca came out Chris and her had a mature conversation which angered Chris Harrison. 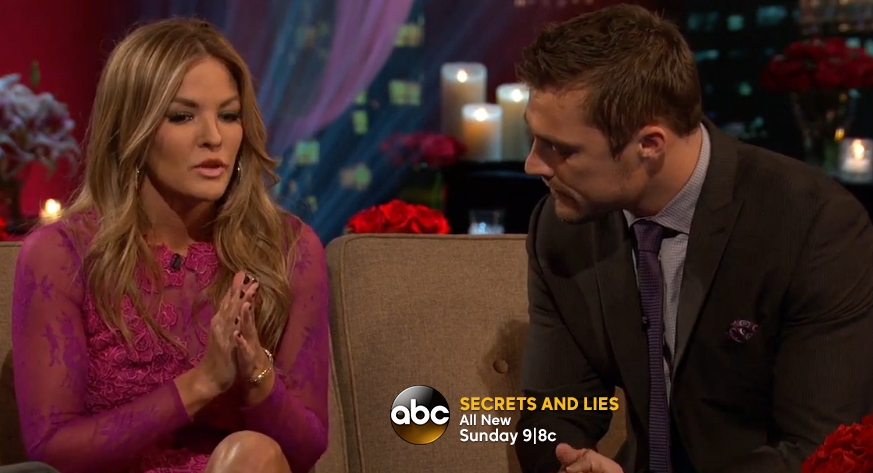 So much so that the threw a couple of fencing knives on the table and told them fight out their feelings.
Not really but he was begging for some drama.

Whitney came out later and they looked happy.

So I will invest my time into their relationship on social media until they break up.
Or throughout their marriage.
Whichever comes first.

They were given a cow by Jimmy Kimmel and that did cheer me up a little bit.
Mainly because he named it Juan Pablo. 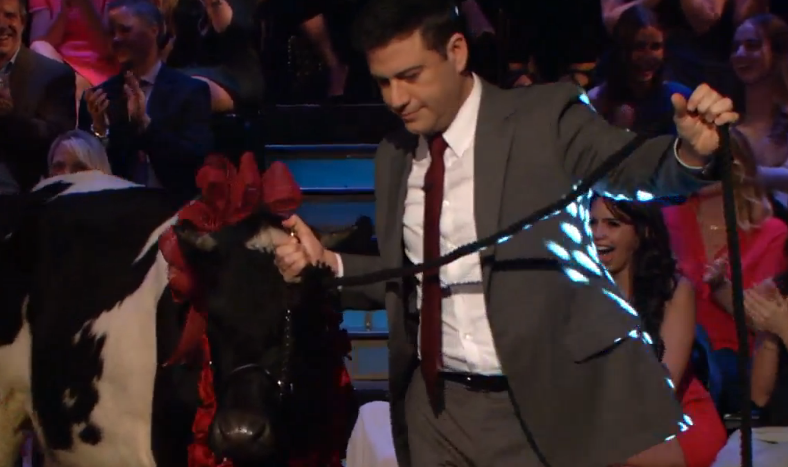 The final segment of the night was the Bachelorette announcement.
Chris Harrison said that there were divisions so great across Bachelor nation, that they couldn't choose one Bachelorette....they had to choose two.
Kaitlyn & Britt.

I call bullshit.
There is no way that people loved Britt so much, that they would want a whole season of this face: 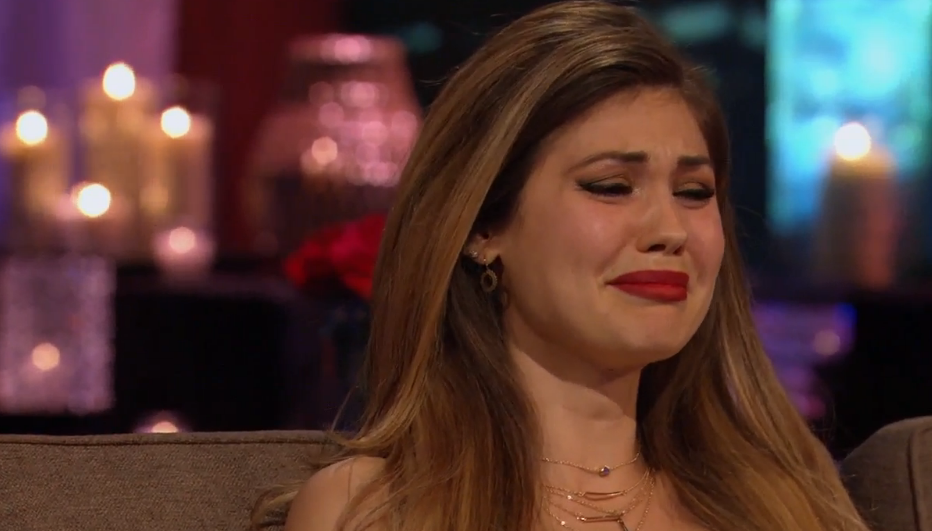 But alas, we now have two Bachelorettes and I'm really conflicted on whether or not to watch.

Here's why: the men get to choose which woman they want to date.
The way they set it up it seems like two women go in and one woman comes out the season's Bachelorette based on the men's preference.
What happened to picking specifically for the main contestant?
Why can't they pick for both women and follow both their stories?

Now these two ladies have to compete again, to then find a partner?
That seems so lame and kind of degrading.
How gross will one of them feel when they get rejected again on national television?
Kaitlyn even said it wasn't ideal, and honestly neither of them looked super pumped about the announcement. 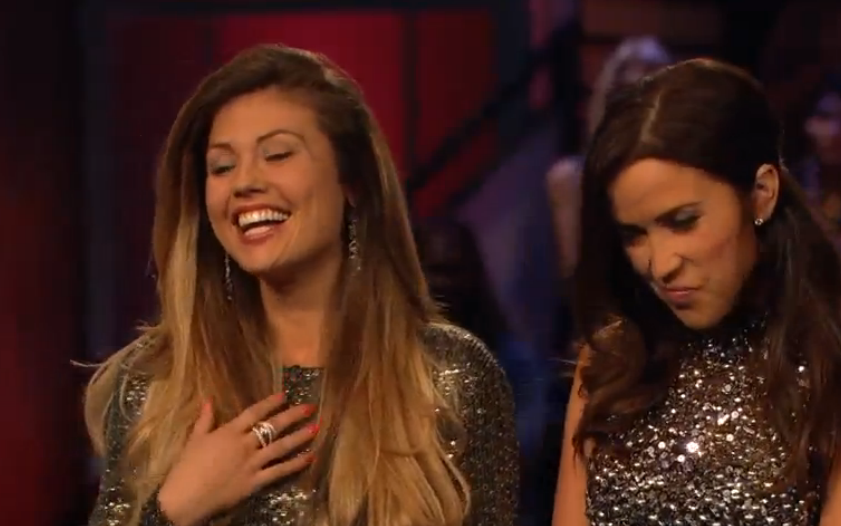 The one saving grace is that the confusing Bachelor in Paradise is coming back this summer and Ashley S. is making her way to the island.

I've never read "The Secret" but I heard that it's based on the theory that if you put something out into the universe enough it comes true.
Here's what I'm putting out into the universe:
I want Ashley S. to make a shark fin, wear it in the ocean, in the pool, on land, to scare everyone, and I want the "Jaws" theme music to play every time.

Please make that happen ABC.
And please make the right decision by giving Britt and Kaitlyn equal chances to make their choices.

Another season down.
What were your thoughts?
What do you think about this new "twist"?
Tell me errything.