If this season isn't a recipe for intense arm pit sweat I don't know what is...
We open this week with Ian berating Kaitlyn.
He said that the guys on the show are on vacation
(Besides Clare Danes in "Brokedown Palace," these guys may be having the least relaxing vacay)
and that they only talk about sex and make poop & fart jokes...
If you ask me farts are always funny, so either I'm perfect for every dude in that room or Ian needs to get a life.

Ian tells her that he was hoping that she would still be heart broken so that he could swoop in and take advantage.
Kaitlyn needed to appreciate how deep Ian was, because Princeton didn't teach cheesy movie quotes.
Basically, he was kind of a big deal, his apartment smelled of rich mahogany, and he had many leather bound books.
He said because Kaitlyn was such a bad Bachelorette he knew what it takes to be a great Bachelor.
He also stated that he needed some sex.
Cue up Katy Perry y'all because Ian was the one that got away...


Nick seeing his opportunity swooped in to make sure Kaitlyn was ok.
He tells her he wants to know her inside and out ....and if you've watched last week you already know what I know about what they did so.....
Yuck.

Shawn is also concerned so he goes to check on her AND SEES HER MAKING OUT WITH NICK.
Did I yell "AVERT YOUR BEAUTIFUL LAKE WATER BLUE EYES!" at my TV?
Maybe.

He looked so hurt---and he continued to seem bummed the rest of the episode.
I know, I know...he signed up for this all inclusive vacation knowing the risk of being dumped but dang:

By the way, all of this happens
BEFORE the damn rose ceremony.
So much is going on that Cupcake declares he'd pull out one of his teeth for a rose.
To be fair, he's a dentist, has the proper tools, and it would probably be a back molar so what's the real sacrifice?

After the rose ceremony, Joshua left to weld himself another rose to play the least satisfying game of, "She Loves Me, She Loves Me Not."

They find out their going to Dublin, and Cupcake says that Kaitlyn is the pot of gold at the end of the rainbow.
I was half expecting him to say, "She's after me hearts, and I'll give her me stars" but then realized he would probably refrain from Lucky Charms jokes as it's a sugary cereal and bad for one's teeth.

He makes a joke about getting lucky in Dublin---again....foreshadowing.

It started to feel like we had seen this episode before ---oh because we have:
Andi: 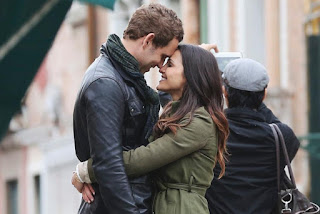 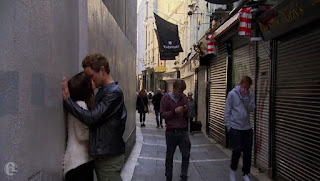 I don't know what it is about Nick that makes women love him so much.
I've gotten some comments that he could be a shapeshifter and appears more attractive to the person he's preying on which is a valid point.

The date consisted of them walking around, "river dancing," and buying Claddagh rings, and Chris Harrison having to yell "hand check" every 15-20 minutes because they couldn't stop touching each other.

That night, they have dinner in a church.
Ok--they make out in a church.
Even the statues were like "Ooo girl...get a hold of yourself." 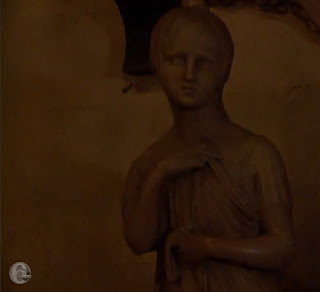 They go back to her suite, go into her room, and have sex.
They left their mics on so we were treated to Nick's romantic words of,
"I'm feeling for you."

Pack it up guys, because with lines like that how can you even compete with him?
Cupcake, your sweet ride got towed from the driveway so you're on your own. 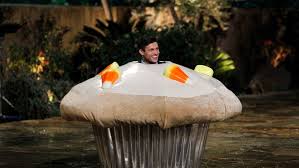 The fact that they were still mic'd up leads me to believe there was a lot of wrestling with cords.
And the fact that a camera guy had to stand there filming a closed door for however long is creepy, disturbing, and a little bit funny all at the same time.

The next morning Kaitlyn went from being unapologetic for what happened, to remembering that Nick outted Andi on national television, and would have no problem telling the guys what happened.

In the guys suite, Nick smugly tells them that he went back to Kaitlyn's room and talked for hours.
The dudes quickly shut him down by saying that the same thing happened to Shawn...
Nick tells them things got intimate, but no one pries because they hate him and don't trust him.

The group date card comes, and two names are left off the list.
That means that JJ and Joe are on the dreaded 2:1.
Remember when JJ was the villain?

Those were the days.

The group date sends the guys to an Irish wake where they celebrate the life of their dead girlfriend Kaitlyn. 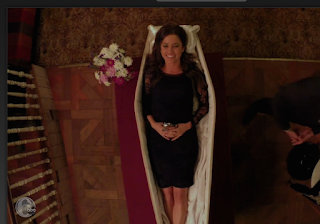 Ben H. summed it up nicely by saying,
"Great. My girlfriend is dead. Now I'm single again.
Shawn says she couldn't take life anymore after spending a full day with Nick.
Head Shoulders Chin and Eyebrows (too long?) said she was so talented with a terrible laugh.
Ben Z then made it real by reminding us all about his mom's passing.

I don't know if the producers are just constantly setting her up, but there is not one group date this girl can go through without getting reminded of someone's painful past.

Luckily Mumford & Dads came to lighten the mood and everyone had a grand time. 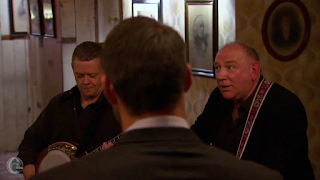 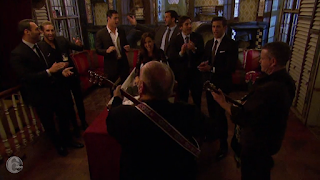 Until Chin got the group date rose and Shawn starts to have another break down.
He talks to a producer that he trusts (uh-oh) and says that he feels like he can't do it anymore
(no plz. never leave me Kaitlyn)

He tells the guys he loves her and somehow makes it back to her room.
Kaitlyn is so happy to see him, but looks like she's going to crack and tell him what happened with Nick.

Next week looks like a series of storming out rooms so have your inhalers armed and ready if that kind of thing makes you nervous.
(Just me?)

At the very end, Brady wakes up from his 10th nap of the day to meet Britt's mom.
She only refers to him as her friend and Britt seems concerned.
Do we know if her and Brady are in a beanie contest?
Because now it's just seeming a little forced... 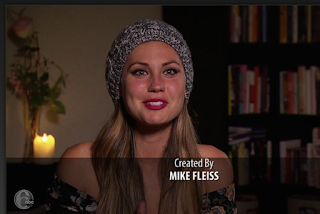 What do you think?
Are you still Team Shawn?
Who do you think makes the most dramatic exit next week?
Tell me in the comments!