Yo... this season is stressful.
The guys suck so bad (not you Shawn you're perfect and don't let anyone tell you different.)
Kaitlyn is only shown making out with dudes or looking like the host of a "What Would You Do?" reboot with the types of group dates they're going on.

I find myself wanting to fast word through conversations with some of these guys because they are truly --and I mean this from the bottom of my heart--
idiots.

This week started off with the guys grilling Nick before the cocktail party// rose ceremony in the arctic tundra of Yankees stadium.

Joshua began to crack and asked if Nick only thought Kaitlyn was a cool chick and not an amazing woman.
It went on for awhile and we begin to realize that Joshua was less endearing and little more "stands outside your window with a boombox after one date."

During the cocktail party JJ uses her as a bat and then runs her around the bases, which would fulfill zero dreams on anyone's bucket list.
The only time I want a man to run while carrying me is away from a fire...and even then don't worry about it bro.

Guys complained about Nick but she showed them who's boss by making them stand on an iceberg known as the first baseline while she handed out roses.
She then told the guys that they were going to the top romantic honeymoon location in the world:
San Antonio.

The first 1:1 date was with Ben H.
They went to a two-step competition, where a woman who met her husband on the dance floor taught them the dance.
Then the producers found the people who's ancestors lived in the town from "Footloose" to give us 1000 dance/love metaphors.

We also met this sweet ghost, who could really get down.

They got tapped out of the competition which was a bummer...

via
but don't worry the producer's enjoyed the suspense of not knowing when you were going to get bounced so much that next summer they're bringing us:
STEP UP TO THE STREETS BACHELORETTE ROULETTE DANCE COMPETITION PARADISE ISLAND.
4 Bachelorettes
84 guys
1 choreographer
1 beach
1 high school cheerleading championship and 88 hearts on the line.

Overall the date was cute.
Ben H. seems pretty adorable but once you see Shawn B in action it's like no one else matters.

What's that?
My crazy is showing?
Got it.


So this group date was probably borderline if not over the line offensive.
This kid killed it with his traditional mariachi song.
So much so that he is now also in the running for Kaitlyn's heart. 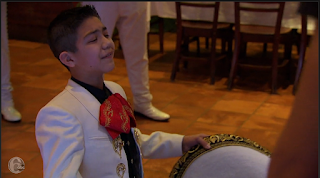 The guys then had to write their own traditional mariachi songs (when will this reign of terror end?) and sing them in public to Kaitlyn.

Naturally they needed to fit the part completely by wearing this: 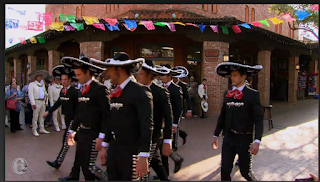 It was painful, but dates like these do prepare them for real life.
Wait....

During the whole date Joshua kept talking about how he didn't trust the new guy.
He kind of turned into an old timey sherriff saying things like,

"I don't know but m'guy intuition is tellin' me somethin'..."

Later in the date, Joshua took some time to show Kaitlyn how much she trusted her, by asking her to cut his hair while he was blindfolded.

In a rusty bucket of the old timey saloon, there were clippers, scissors, and an eye mask.
Did he have to ask the producers for those things?
Because if so --hilarious.
He told her he trusted her completely which is a bold move.
I took advice from my mom once to "get a shag haircut" because it would look "adorable." 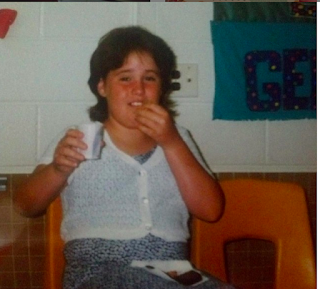 During the evening Nick continues to essentially just breath which sends Joshua into another fury.
He pulls Kaitlyn aside--AGAIN--and tells her that everyone hates Nick and can't stand that he's there.
Kaitlyn flips the script and asks if that means that "everyone is lying to her."
Joshua starts cave because he realizes that he's poked a sleeping dragon.
When he returns to the group he tells them that he was doing an interview.
Kaitlyn comes to the group and confronts Joshua and the rest of the guys.
Everyone realizes Joshua lied about the interview, and no one fesses up to how much they hate Nick.
Joshua looks dumb and Nick gets the group date rose.

Clearly Josh is in way over his head.
And while he was sweet before, he's got tunnel vision.
He wants to take out other dudes--but we all know that's not what gets you thru.
Poor guy.

So I don't want to exaggerate, but uh....
Shawn B is the only person on this show that needs attention and I'm annoyed that we can't just skip to the final rose because he is the best. 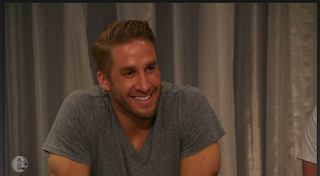 He is the Captain now.

Their date was perfect.
I can't be snarky.
He told a story about how he almost died and then said,
"I could have missed out on all of this."
I MEAN WHAT?
HOW DID HE SAY THAT AND NOT SOUND LIKE A DOUCHE?
BECAUSE HE DIDN'T.... 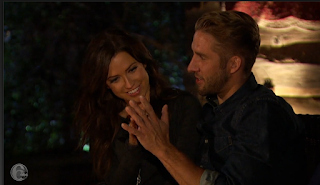 She said he could be the one she handed her final rose to, and so help me God, she better be telling the truth.

Back at the House// Cocktail Party:

Like most episodes this season, it looked like we weren't going to get a full rose ceremony.
We were however, going to be treated, to Ian's "Bachelor" audition tape.

Ian said to Nick and to the producers, that he was a former model that defied death.
My theory is that he's a former model due to his weird crop circle baldness.
He said that he didn't find anything wrong with himself...but with her.

Ian claimed that he would make a great Bachelor, as he is a gift that you unwrap for life.

I would rather have another season of Juan Pablo then ever watch an episode of Ian as the lead.
I'm a little scared that if I say that 2 more times, a Beetlejuice situation will occur, and Juan Pablo will appear...but I'm willing to risk it to prove how much Ian suckkkkks.

Clearly there was some editing done to his comments but he really started to lay it on by saying that Kaitlyn wasn't half as hot as his ex-girlfriend.
There's probably a lot of reasons why that girl is his ex.

At the beginning of the cocktail party, Kaitlyn canoed through Josh's tears, and found her way to Jared,formerly known as Eyebrows, now known as Chin thanks to a reader.
They make out and then Ian descends and tells her just how badly he doesn't like her.

He tells her that she's surface level, and only wanted to make out with guys.

He goes for blood and she looks PISSED.

We were left with a "to be continued..." and y'all next week looks tense as hell.
Shawn B gets mad, people get slept with, I cry.
It all goes down and I need someone to hold me.

What are you thinking?
Stressed?
Don't care?
Tell me in the comments!
Email Post