A Face on the Milk Carton

We've made it to Week 4 already!

Was anyone else a little afraid that when we joined the pool party in progress, Vanessa was going to be walked out by Nick, for telling him how disappointed she was?

She didn't hold back when she told him that she was happy to give the rose back if that's how he was going to act.
Nick told her that he was glad she reached out to him and that she just needed to be patient with Corrine.
Reading between the lines I think that means: "The producers are keeping her here..."

She said she understood, but believed that Corrine would not be getting a rose.
lol.

Meanwhile, the Jasmine, the dancer, was doing her best detective work trying to find Corrine.
In the first 10 minutes she said, "WHERE IS SHE?" three times.

If you go back to past episodes, she is constantly wondering around asking where Corrine is, and what she's doing.

Considering their dates aren't in the Mall of America on Black Friday, it's not that hard to find her.
She's either, asleep, manually blowing up a bounce house, asleep, eating, or writing letters to Raquel about how camp is going.
Dancer doesn't need to put the Corrine's face on a milk carton.
Although, that book really f'ed me up in middle school.

Sarah and Taylor, being the super sleuths they were, found Corrine sleeping.
They let her know that she was acting very privileged and entitled.
Corrine said she was in no way entitled or privileged.
A nanny practically pays for itself, y'all.

The rose ceremony was pretty by the book.
The women all thought they were about to be Corrine free, but were crushed when the final rose went to her.

The women were told the next day that they were about to get ready to travel the world.
Get your passports girls because your first stop is Milwaukee, Wisconsin- Nick's hometown.

via GIPHY
Everyone knows Milwaukee is the Paris of the Midwest.

Before the dates, Nick met up with America's most defeated parents: Mr. & Mrs. Viall.
I don't know if it's because we are always shown his mom weeping, but I've never realized how much his dad looks like an accountant from the 50's trying to take down the mob.
Nick's parents told him that they were hopeful for him to find love, but also they were tired of seeing him on the show.
They get it.
We get it.
We're serious Nick....this is the last time.

The group of women, all gather and Nick tells them that it's time for a 1:1, with Danielle L.

Up until now, she's seemed pretty cool.
Maybe even a top contender.
And for a lot of people she still might be but when she started giggling non-stop I was like:
The whole date, she was trying a litttttle too hard to be carefree and flirty.
At the cookie shop she was like,
"What if I just put like, this like, icing, on your nose?"
During the tour of his town, Nick sees an ex-girlfriend sitting in a coffee shop.
Very coincidental.
Seeing as he had grown up in the town when he was eleven, I can only infer that their relationship was deep and meaningful.

Danielle was a little thrown that they ran into his ex.
Let's be real, you can swing a dead cat and hit at least one of Nick's exes at this point.

Nick asked Danielle if she had any burning questions for Amber the Ex.
Amber, having known Nick at his peak tween maturity, was ready for the grilling.
When Danielle just giggled, Amber said that Nick lead with his heart.
Precious.

Later they went to a hill to make out, and that's when we learned about Danielle being a self proclaimed prude and child of divorce.

She wanted to find love, but was scared because she didn't want a divorce like her parents'.
The best solution was to come on a show where you and 29 other women date one man, with no real certainty that he will be compatible or that you will end up in love.
But hey, sometimes you go on the show and four years later, you're still trying to figure out how to get someone to just let you say "Will you marry me?" without getting interrupted.

The more Nick talked about his time growing up and how he tried to have successful relationships, it made him a little more endearing.
He has Friend Zone written all over him.
I mean he said he built a girl shelves for her locker to get a kiss.
He claimed he got it but we all know it was on the cheek, and the girl ran to jump in her actual boyfriend's convertible right after.

Later in the evening he asked her when was the last time she went shopping in her sweatpants.
To which I replied, what else do you wear to go shopping?
Stretchy pants are key when shopping for two reasons:
The possibility of a Cinnabon
Free samples

He gave her the rose, and then took her to a surprise concert with Chris Lane.
Once again they were dancing and kissing in front of a crowd.


The group date card arrived at the house, and even though we are in week 4, there were still about 15 names on it.
One of those names being Whitney. 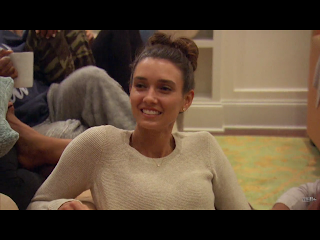 I can honestly say I thought that was Astrid this entire time. 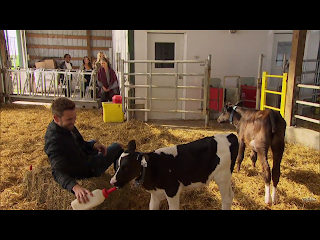 Which is so crazy to me.
It's like milk inception.
Feeding the cow milk, that then makes milk.
Trippy.

They found out that they were going to do farm chores, because Nick had a friend who had a farm once.
The owners of the farm talked about why important cows were.
Not only did they make milk but they also helped in the process of making one of earth's greatest gifts:
After everyone was shown Nick's inability to milk a cow, it was time to shovel poop.
As you can imagine, Corrine was less than pleased to be doing chores at all, so shoveling poop was clearly not working for her.


via GIPHY
She tried, but then had to stop because of a hand situation, that almost sent her to the hospital.
That's all according to her.
Not one ambulance was called.

I will say, Corrine is funny.
She's a terrrrrrrible person, but she's like Paris Hilton & Nicole Richie morphed into one person from the Simple Life and tbh...
I love it.

At the after party the women were tired of talking about Corrine.
Astrid or Whitney...I have no clue honestly...said she was done talking about her.
However, Taylor felt like it was important to talk TO Corrine further about why she was so offended about Corrine's napping.

Corrine, hearing that the women were talking about her stated it was because they didn't really know her.
She's a corn husk y'all.
With pellets of information and buttery juicy corn...

And honestly, it wasn't THAT big of a deal that she napped.
She pointed out that,
Abe Lincoln and Michael Jordan napped.

She's not wrong
They were/are some of history's greatest nappers.

Everyone knows Abe Lincoln's famous quote, "Four hours and 7 minutes ago, was the amount of time  I took a dope ass nap."
It's written on the penny.

It's also a well known fact that "Space Jam" was actually a dream Michael Jordan had during a nap, and he woke up and scribbled everything down before calling Warner Brothers.
Right down to Bill Murray being there and everything.

So give Corrine a break you guys.
She also got in a fight with Christina, who continually questioned her Corrine's maturity.
To which Corrine replied,
IS THIS MATURE?!

Throughout all of the conversations, Taylor, the mental health professional did a terrible job of facilitating the group process.
No one's going to heal Taylor if you keep talking over people.

Christina ended up getting the group date rose, while everyone else remained salty about Corrine's presence.

The last 1:1 date was with Raven.
She met up with Nick at Bella's soccer game. 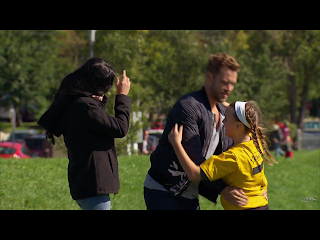 The amount of screen time Bella gets makes me wonder if he's her dad.
I don't hate the plot twist, but it would explain a lot.

Of course, Nick's parents were at the game.
Once they finished making Raven take a blood oath that if asked, she would in fact marry Nick, they went to the local skating rink.
Where you can apparently just win a kid in a claw machine:
I'm not kidding you when I say they were both graceful af on skates.

Later, at dinner, Nick asked Raven about her last serious relationship.
Her response was basically three solid verses to Carrie Underwood's next hit.
She caught her boyfriend cheating, essentially beat him, and then left.
It's gonna be a chart topper.

Raven is essentially Becca Tilley 2.0 and I'M HERE FOR IT.
Y'all know my stance: Becca Tilley for Prez, but now that she's booed up with Robert Graham, I'm campaigning for Raven.

She got the rose, and they ended the evening skating like they were about to go for the gold.

At the rose ceremony, Taylor was amped up to fight Corrine.
Mainly because she didn't like her, but also because she wanted everyone to know that she knew what "emotional intelligence" meant.

she decided that she was going to confront Taylor.

However, Taylor was too busy interrupting Danielle L., who took Nick first, even though she had a rose.

So, Corrine interrupted Taylor and Nick...to talk to Taylor.

She told Taylor she was not dumb and Taylor continued to say she wasn't dumb, just not emotionally intelligent.

The conversation continued to escalate and though there is a threat of a punch to the face, we won't know if it actually happened until next week because the episode was....

What are your thoughts?
Am I being too harsh on Danielle L?
Is Taylor going to stick around? Or will it be Corrine?
Let me know in the comments!
Email Post