Well folks, who thought this day would come?
The day when Nick Viall returned for the FOURTH time to find love, except this time:
He's in charge.

Much like all Bachelor's they started off focusing on Nick being a beef cake.
There aren't a lot of shirtless moments with Nick from seasonS past.
He was normally bundled or hunched over hiding from Josh and Shawn B.
But he's here, he's jacked, and he's ready to find love.
There have been a lot of people who said they aren't going to watch this season because Nick is a shifty, mush mouthed, jerk and while I tend to agree...I kinda fell for him during Bachelor in Paradise.
I'm pretty sure that's what all the girls say before they get murdered in a Lifetime movie, but alas, here I am.

Being introduced to Nick this season was basically a wash.
It was more like Chris Harrison showing up, and saying,
"Have you turned on this show at any time in the last 3 years? Then you're good."

I mean his little sister Bella was 8 when we met her and now she's essentially 3 years away from being a contestant on the show.
Everyone in Nick's family is just praying they don't have to travel to another "After the Rose" where they leave crying.
Nick seems pretty sure that it's going to work this time.
In fact, he's not going to give up until it does.

We don't negotiate with terrorists Nick.
After this the jig is up.
You go on Bumble like the rest of us.

From former Bachelors to the women, they tend to preface how much they didn't like Nick at all, until recently.
Sean Lowe, Ben Higgins, and Chris Soules sat around a table talking about how surprised they were that Nick actually turned out to be an OK guy.
If that's not a ringing endorsement, what is?

Let's review some of the women we met last night:

Attorney Rachel:
She's a hard worker and likes to let loose by vacuuming and dancing.
This is a girl I can hang with--however, I would like to start a gofundme for her to get a Dyson.

There's a "nursing student" who loves her cat.
I put her occupation in quotations because I think that's how it was listed on Amazon when she bought that costume.
She also asked Nick to "Lady and the Tramp" a cold hot dog.
I'm setting the DVR for their tv wedding special now.

The other day I was wondering whatever happened to Gretchen Wilson, and it turns out that she changed her name to Raven and now owns a small business in Hoxie. 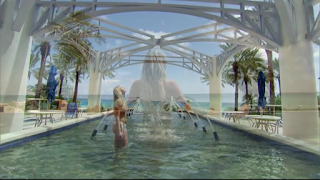 Does she make it look like those fountains are at her home in Miami and not at a hotel DJ Khaled rides by on his jet ski? Yes.
Does she still live at home "running" her parent's multimillion dollar company? Yes.
Does she have a nanny that takes care of her and gives her plain cucumbers as a snack as she pretends to type up contracts instead of angry yelp reviews? Also yes. 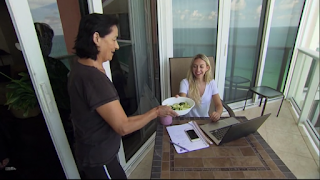 I can't say I'd like having a nanny in my late 20's.
Unless it was this Nanny:
via GIPHY

There's the actual neonatal nurse who is a lot like Cinderella.

Like there's a 99% chance Gus Gus helped her get ready for work.

There was the former wedding date, Elizabeth.

She met Nick at Jade and Tanner's wedding and while she originially pleaded the fifth she later confesses to sleeping with Nick.
She said she never gave him her number because she thought he was just being friendly when he asked for it.
After watching Nick on BIP she decided to go through the rigorous screening process to meet him, even though she could have hollered at her best friend Jade for his number and not taken a psych eval, but different strokes for different folks.

When she got out of the limo she wasn't sure if Nick remembered her, which was exciting for her.
She liked remaining a mystery.
If a guy doesn't remember sleeping with you and it's a fun challenge to get him to remember:
Nick...
Later Nick questions why she didn't reach out, and while she fumbled a little I don't think she's a total bunny boiler.

There's the mental health counselor who immediately told Nick that her friends think he's a "piece of sh!t."
Surely she is equally as empathic with her clients.

Client: My mom and I don't get along
Taylor: Well she did tell me you were a real piece of sh!t, so let's unpack that.

There were the women who made explicit impressions.
Most specifically the one who said, "Do you know what a girl wearing underwear says?"
When Nick replied, "No."
She said, "Me either."

Do you know what a girl wearing a sturdy pair of Hanes Her Way says?
Knock it off.

Others referenced how sexual Nick was and how they were TOTALLY fine with it.
Until Corrine stole Nick for a second time and kissed him.

Nick's reaction was something that you would want to tell the children.

*Corrine kisses Nick.*
Nick [voice over]: I wasn't ready for that. I hope no one saw it.

You can see the headlines now:
Aspiring Dolphin Trainer Eaten By Shark
The young woman thought the great white was a dolphin, and couldn't understand why it wouldn't float backwards on its tail while waving its fins. You could hear her asking the shark, "Why are you such a bitey dolphin?" The shark could not be reached for comment.

Even though she didn't know what she was, she committed to that part, and was a true delight to everyone in the house.

Overall, there were a few meltdowns, a lot of red dresses, and a promise for a good amount of crazy.

My hope is that the women eventually stop talking about Nick like he's their misunderstood prisoner pen pal with a heart of gold.

He was a jerk, but a jerk on a highly edited reality series.
I doubt he left women hanging over a lava pit at home, before he came to the mansion.

I'm open for Nick to find love on this journey.
My heart is ready.

What do you think?

Leave your opinions in the comments!