Remember the old days when we were guaranteed a full Rose Ceremony every episode?
Those were good times.

Now we are foreverrrrr being left with To Be Continued...
So all week I was a wreck about DeMario coming back.
I couldn't eat, or sleep.
JK.
I can always eat and sleep.

We left DeMario at the gate, and that's where it was picked up.
Rachel met him there and let him say his peace.
He said,
"You said I needed to keep it real.
I did not keep it real."

I don't know if there are any "Hot Rod" fans besides me and my two friends Sara & Dan but how he was talking kind of reminded me of this: 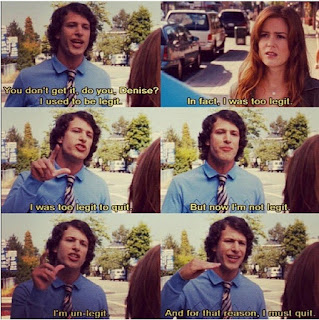 He had the worst dry mouth, and started using his favorite quotes.
I'm pretty sure he looked up "get her back" images on Pinterest in his car ride over.
He said that, "In order to experience joy, you have to experience pain."
Rachel told him she understood that he wanted to move forward, but that it wasn't going to be forward in the mansion.
Instead it was going to be the other way, because she was looking for a man not a boy.

Once the guys were put their torches down, it was back to the house for antics and the rose ceremony.
Tickle Monster had giant cartoon hands.

Why?
Why did the producers find them?
Why are they available?
Why did Rachel pretend she liked them?
We'll never know.

Kenny let her know he was a dad.
Just in case she forgot.
I think he just keeps referring to himself as "Daddy"on purpose.
I don't care for it.

Another stand out during the rose ceremony, and really any interaction in the mansion, is that green velvet couch.
I want to nap on it.
I want people to come by and look at it.
I basically want to get that couch and have a "Sip and See," for it.

With all the DeMario drama I almost forgot that Whaboom and Blake were fighting.
So when Whaboom told Rachel, that Blake had a crush on him I was immediately invested.
According to Lucas (Whaboom), he woke up to Blake standing over him seductively eating a banana.

Blake, however, said that couldn't be true because he doesn't eat carbs because he was on the keto diet.
Well Chutney told Elle Woods that she was in the shower even after she got a perm, and we all know how that turned out, don't we.

Blake and Lucas both thought they had saved themselves, when in fact, they both got sent home.
Lucas was sad, but Blake was angry.
There's a solid chance he's on a steroid diet, because Blake's response was,
"I'm going home with the clown?! Time to kill this guy!"

They proceeded to yell at each other in the driveway. Blake said that Lucas was a clown, and said words I'll never unhear:
Whacka whacka, boop boop, fart joke.
While the start of a beautiful haiku, it didn't rile Lucas up enough to throw some fists.
They DO live in the same town so I'm sure they'll be a stand off at high noon outside the local Ross.

The first group date had essentially all of my favs on it, and they were going to see one of America's favorite people: Ellen!
Ellen said that she tells herself every season she's not going to watch and then she gets sucked in.
Don't we all Ellen...don't we all.

As they walked in Rachel gave Ellen the run down.
Ellen wasn't too impressed by Tickle Guy....at all.
via GIPHY

Naturally she made all the men dance without their shirts on.
Praise you, Ellen.

Alex truly got down to business and told us about his business when he confessed that he peed in the pool.
via GIPHY

It was also revealed that some of the guys had kissed Rachel before.
Bryan and Will got into I kissed her/I kissed her better competition, and in a shocking move Bryan reached for Ellen's microphone.
Bryan, sweetie, don't touch Ellen.
She's a national treasure.

Tickle Monster said didn't think any of the guys had kissed Rachel yet, and maybe it was just on the cheek.
Precious angel,
That is not the case.

Fred thought the date was an opportunity to show Rachel that he was a man and not the little boy that she kept talking about.
Except then he asked to kiss her, and it wasn't that great, and she sent him home.

Alex continued to impress during the cocktail party.
He made a comment that Rachel was looking at his left eye when she talked to him, which meant she was focused on relationships.

All damn week, I've been noticing I look at the left eye too.
Just call me Ashley "Left Eye" Jonez.

He ended up getting the group date rose.
Even though, I would give a rose to Peter literally every day of the week.
#obsessed.

There was no date card for the 1:1 date card, but there was a 1:1 DATE with Anthony.

via GIPHY
Who I had never seen before until that moment.

They rode horses, on Rodeo Drive into all the stores.
They bought boots.
They danced.
It was....uneventful.
He got the rose and made his way back to the house.

In the mansion, Eric was freaking out because he didn't know if Rachel was genuine enough.
He was pissed because he'd never been so into just one girl before and that she wasn't giving him anything.

It was a little weird.
He said he was going to set the record straight with her at the group date.
Sounded promising.

Rachel showed up for the group date with her crew (again).
via GIPHY
They were probably still in the area because their planes didn't leave for paradise until the next day.

They all got on a party bus and hit the road.
Raven asked Lee and one of the other chiseled jaw lines who couldn't be trusted.
They both said Eric.
Raven said it was a red flag.

They arrived at a Coyote Ugly style bar, but for women.
The guys took their shirts off, and were told they were going to mud wrestle.

There was some pretty uninspired cat calling from the women to the shirtless men, like,
"Show us your junk," and "Let me see that butt."

At least make it creative ladies:

How much do you think those women were paid?
Like they probably have respectable full time jobs and now they're going to be gifs.
Actually...maybe that's not so bad.

Everyone thought Kenny was going to win mud wrestling because of his professional wrestling background.
via GIPHY
But he didn't, the other guy did.

I could not tell you his name for one million dollars.

Later in the evening, Kenny, not to be out done let us know that he used to be a dancer in Vegas.
And showed her.

via GIPHY
I know I talk about how much I hate when people sing at someone...

Add lap dancing as a tight, TIGHT, second on the:
Things that Ashley Hates List.

Eric finally got to talk to Rachel, and she brought up her friends' concerns.
They had a weird conversation but determined that everything was cool, and they were going to move forward.
I think.
It was a hard conversation to follow.
During the conversation Rachel told him that Lee was the one who said something to her, so after he got off the couch he went to confront him.
Lee said that he was suspicious of Eric because he'd never been in love before, and that he wanted to help him.
Like a love coach.
A little love coach, that has real controversy surrounding him this week...
Somehow, that conversation was also confusing to follow, but Eric summed it up best by saying that Lee had a lot of snake in his DNA.

At the rose ceremony, Iggy went to Rachel to talk about Eric's opportunities for growth.
Because he's Eric's fourth grade teacher at his parent/teacher conference.

Rachel confronted Eric about Iggy's comments.
Eric and her had yet another non-descriptive conversation where he ended up keeping his rose.

Iggy then went to tell Eric he spoke about him and Eric started yelling about his name being in everyone's mouth.
We were then hit with another To Be Continued....

Lee seems to be prettttty icky moving forward.
I'm interested to see how next week plays out.
I'm also interested to see Eric when he's not melting down.
And if Iggy gives everyone good grades on their report card.

What were your thoughts this week!?